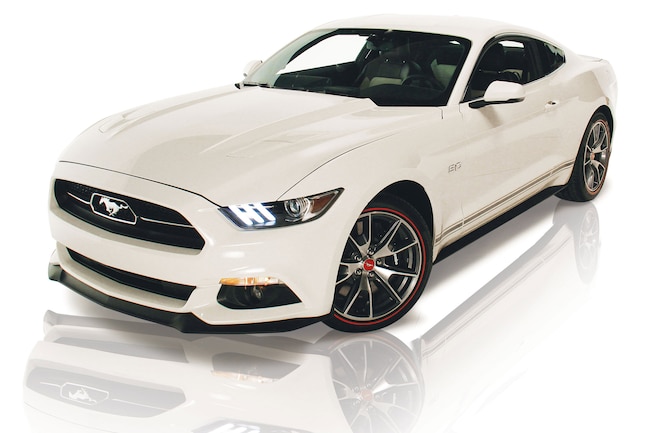 The 2015 Mustang Dream Giveaway, a nationwide drawing sponsored by New Beginning Children’s Homes–a charitable organization, recently launched. The winner of this once-in-a-lifetime prize package will receive a 1965 Mustang GT K-code Fastback and a 2015 50th Anniversary Mustang GT. Also included in the grand-prize package is $30,000 for taxes. Never before have two spectacular Mustangs of this magnitude been given away together and it’s never going to happen again. To enter, the general public can simply call toll free 877.700.8946 or enter online at www.dreamgiveaway.com

The Grand Prizes: This restored 1965 Mustang GT Fastback—equipped with a High-Performance 289 or K-code—comes finished in Wimbledon White with a Pony interior. The 1965 Mustang GT K-code muscle cars have the distinction of being the only Mustang model that Ford racing legend Carroll Shelby allowed to become the first-generation Shelby GT350. By best estimates, only 1% of all 1965 Mustangs were born with this high-revving performance engine. The 2015 50th anniversary Mustang GT is extremely coveted. With only 1,964 built, this limited edition Mustang is powered by a 5.0L V-8 rated at 435hp and is finished in Wimbledon White, just like every Mustang sent to Carroll Shelby back in 1965. It also sports a two-tone cashmere and black Pony leather interior.

Making this 50th Anniversary Mustang GT even rarer is the fact that it is the only automatic-transmission 2015 Mustang that gets Ford’s all-new Performance Package. As part of the Mustang GT performance pack, it features large Brembo six-piston brakes and 19-inch alloy wheels wrapped in Y-speed rated Pirelli P-Zero summer tires. Other perks from the performance package include retuned springs, bushings, and monotube rear dampers, and a thicker rear sway bar.

New Beginning Children’s Homes (NBCH), the sponsor of this giveaway, is a 501(c)3 provider of family-style long-term residential care with a mission to provide foster children a safe and faith-centered family atmosphere where they can heal, grow, and be loved while working through difficult life issues. In addition to the funding they receive, NBCH will provide grants to several worthwhile charities, including Disabled American Veterans, National Guard Educational Foundation, National Association of Christian Churches, Smile Network International, Mothers Against Drunk Driving, and Detroit Rescue Mission Ministries.