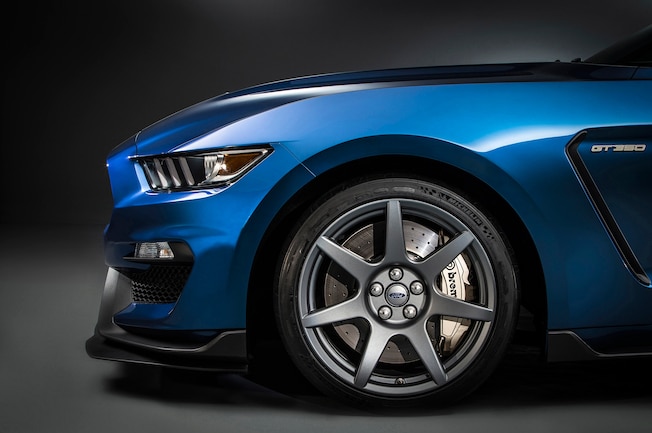 Agustin Jimenez Technical Editor
May 1, 2015
Photos By: Courtesy of Ford

In case you were wondering how committed Ford is to improving their vehicles by making them stronger, lighter and faster, this should help make it very clear. Ford and DowAksa officially joined forces a few weeks ago to develop carbon fiber for high-volume automotive light-weight applications and we’re now seeing that come to fruition in the 2015 Ford Shelby GT350R Mustang, which will be getting a set of carbon fiber wheels as standard equipment. This is the first time a major automotive manufacturer has offered carbon fiber wheels as standard equipment.

The all-new Ford GT will receive carbon fiber wheels to offer both greater fuel efficiency as well as overall better performance thanks to the lightweight wheels. The new Shelby GT350R Mustang will benefit from this same technology.

While carbon fiber wheels have been offered on a handful of exotic supercars before, this is the first time they are being offered as standard equipment on a mass produced platform. The all-new Shelby GT350R gets significant performance gains from this by shaving critical unsprung weight and reducing rolling inertia. The 19x11-inch front and 19x11.5-inch rear wheels provide approximately 13 pounds of unsprung weight reduction per wheel while offering higher levels of stiffness than equivalent aluminum wheels.

The lightweight wheels are wrapped in Michelin’s top-shelf Pilot Sport Cup 2 high-performance tires with rubber compound and a construction unique to Shelby GT350R. The combination of incredibly stiff and light wheels with bespoke tires offers customers exceptional steering feel and levels of performance.

As if that wasn’t enough, the Shelby GT350R also features race car technology that is brought to the street via a track-tuned, carbon fiber rear wing and an aggressive diffuser that offer increased downforce and lift balance which is ideal for high-speed track use.

Back in January, Ford and DowAksa announced they would be joining forces to be a part of the Institute for Advanced Composites Manufacturing Innovation (IACMI), announced by President Obama as part of the larger National Network for Manufacturing Innovation supported by the U.S. Department of Energy. The JDA will facilitate the companies’ efforts in conjunction with IACMI to overcome the high cost and limited availability of carbon fiber in automotive applications.

All we can say is that we’re excited to see the Blue Oval venturing into lightweight materials to make their cars stronger and faster, and if that means spending less cash at the pump, we’re all for it.