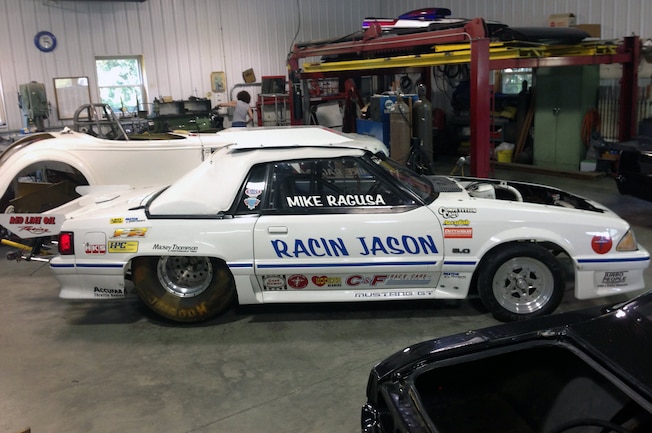 If there was a Fox-body Hall of Fame, Racin’ Jason Betwarda’s famous white convertible would be up front and center. Betwarda burst upon the Northeast Mustang Racing scene in height of the 5.0 era, when the rules were loose and performance limitations were unknown. Like many Mustang owners, he transformed his street Stang into a track warrior adding mods a little at a time. By the early 1990s, the ’87 GT was turbo-equipped and a regular on Friday nights at Englishtown Raceway Park in New Jersey.

His pursuit to be the fastest was relentless. Betwarda wasn’t afraid to push the boundaries, so for the 1993 season, the GT sported a built small-block, tubbed rear and twin-turbos. He battled to the top of the 5.0 wars and on March 30, 1995, with Mike Ragusa driving and Job Spetter of Turbo People tuning, the Stang ran 7.79 at 182 mph—all with a 5.0-based engine. It ultimately ran 7.56 at 187 before the car was parked. Former MM&FF editor, Jim Campisano, called Racin’ Jason, the “undisputed 7-second shootout king,” in a 1995 MM&FF cover story.

Sadly, Jason was killed in 1999 while racing his red coupe, but a part of him will live again thanks to fellow Mustang fanatic Joe Caldwell. Caldwell, who purchased the Mustang in 2013 hopes to bring it back to its former glory.

“I was friends with Mike [Ragusa] and Jason. We lived a couple of miles apart and at the time I raced a nitrous Mustang. I was a big fan and I jumped when I had the chance to buy the car. It’s a part of Mustang racing history and my history, too.

“Everything was junk when I got it,” he exclaimed. “It was sold a few times and was in a storage locker for years. I brought it to C&F Chassis and they redid everything. It has new tubs, rear suspension, crossmembers, cage, anti-roll bar and lots of little things. It brings me back to a great place,” said Caldwell.

The current engine is a Kenny Duttweiler-built 408 that should produce over 2,000 horsepower. Duttweiler assembled the twin-turbo beast with an aluminum block and Yates heads. It’s fed by an Accufab throttle body along with Turbonetics 88mm Y2K turbos, which made an angry growl in a recent dyno test, surpassing 1,400 horsepower on 21 lbs of boost. “We’re going to run with 30-35 pounds,” said Caldwell, “so we’re looking forward to making a lot more power.” The engine also uses Big Stuff 3 EFI and is backed with a Pro Torque converter and ATI powerglide.

“We have to change a few things, and then I can take the car home, take it apart and finish all the details. I need to paint the chassis and then I can put the engine back in and assemble the car. We’re hoping to debut the Mustang at Englishtown soon.” The GT will also ride on 10.5W tires.

To improve performance, the 1987 Mustang has been lightened and brought up to current safety and technology specs, but some things remain unchanged. “I wanted to keep the original-style gauges and the interior look, but we added a safer seat and new cage,” said Caldwell. He also added that Mike Ragusa is excited to get back behind the wheel of the Mustang.

“We’re mainly going to make exhibition runs, but it should be capable of running 6.80s at 210 mph,” said Caldwell. “Plans are to have it at the Yellowbullet.com Nationals, some NMRA races, and others events and shows,” stated Caldwell.

We wish Joe, Mike, and the crew the best of luck, and we can’t wait to point our cameras at the White convertible once again.