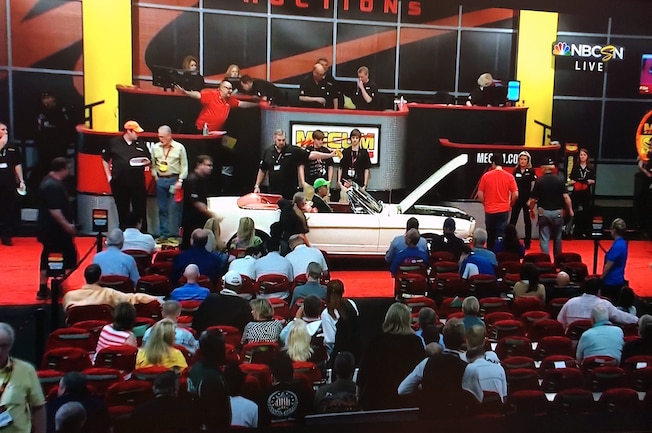 Scott Drake knows a thing or two about Mustang parts and it’s safe to say that when his company decided to build a Mustang tribute car for the 50th anniversary in 2014 we knew the car would be a home run. The 1964½ was built to replicate the Wimbledon White press car originally used by Ford during the marketing launch of the Mustang. Besides touring various events, being on display at the 50th anniversary show in Charlotte, and even gracing the cover of this magazine (May 2014), the Mustang, which was donated by Scott Drake along with over $10,000 in Scott Drake parts, was restored by the Mustangs of East Texas car club.

Once its tour duties were completed the convertible headed to the Mecum auction in Kissimmee, Florida where it crossed the auction block with 100 percent of the auction proceeds destined for National Down Syndrome Society. When the bidding ended the Mustang went to the winner with a final bid of $40,000. “We’re very pleased with the sale of the car. It’s a great day for us and our partners to be able to give back.” said owner Scott Drake. The car and its build have special significance to company owners, Scott and Suzanne Drake. Their oldest son, Troy, seen here with Scott at the auction, was born with Down syndrome. The Drakes have worked hard to make sure their son, and others with intellectual challenges, have the opportunity to live normal independent lives.

The success of the build would not have been possible without the generous support of the following partners: Mustang Club of America, Mecum Auctions, National Down Syndrome Society, Mustangs of East Texas, and National Parts Depot. Special thanks goes to Randy Ortigo for the rebuild on the D-Code 289 4-V engine, Jimmy Hayes for the rebuild of the Cruise-O-Matic C4 transmission, Eddie Siler for the paint and body work on the convertible, and National Parts Depot for the final prep of the car for auction.