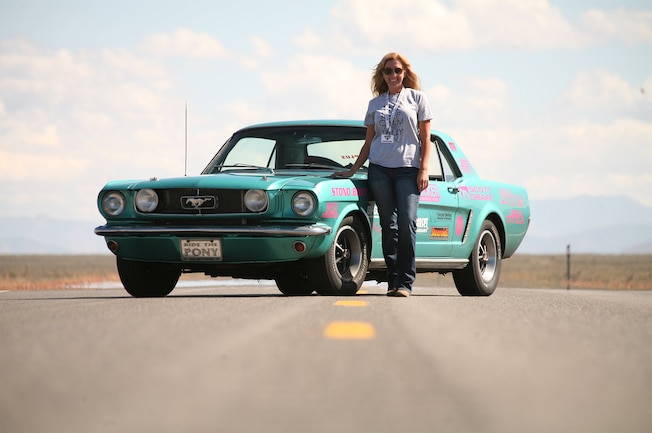 If you watch any of the automotive-themed “reality” shows on television and don’t know any better, you’ll be convinced that you can build an entire car, from a rust bucket to a show winner, in a week or less. They do it all the time, right? Well, the real world is nothing like that, and project cars take a long time to build, typically three times as long as originally planned and with at least twice the expense. The same is true for magazine project cars; add in the time it takes to clean the grease and grime off of your dirty paws and photograph every step of the build, and the expense in time triples when doing a magazine build.

Mustang Monthly is currently working on Project Road Warrior, a 1965 Mustang coupe owned by Courtney Barber, and while you won’t see it in print for several months, you can watch the progress daily through the live stream link we’ve put here. This ’65 is Courtney’s daily driver, her only vehicle, and she drives the wee out it of on road rallies across the country, participating in events like Bullrun, Rally North America, the GoodGuys Road Tour, and the Hot Rod Power Tour. Mustang Monthly is helping her update the car and make it more capable of staying with the high-end hot rods and exotics that she runs with in her escapades, as well as fix some of the rougher parts of the car with some sheet metal and body work. We say “helping” but in fact Courtney is doing all the work herself, at Stono Body Works in Charleston, South Carolina. She will have occasional help from shop owner Dave Mahan and his dog Diesel, but she’s doing 95% of the labor.

So check in every now and then and watch the live stream (which will be active Monday through Friday from roughly 9:00 am to 5:00 pm, Eastern Standard Time) to see how the car is coming along, and give her some kind words of encouragement. If you’ve ever been neck-deep in a project car, you know how important that is! Along the way, you’ll see her replace a bunch of sheet metal and trim with parts from National Parts Depot and Scott Drake, and drop in a Ford Racing S347JR crate engine and a Performance Automatic 4R70W overdrive automatic transmission.