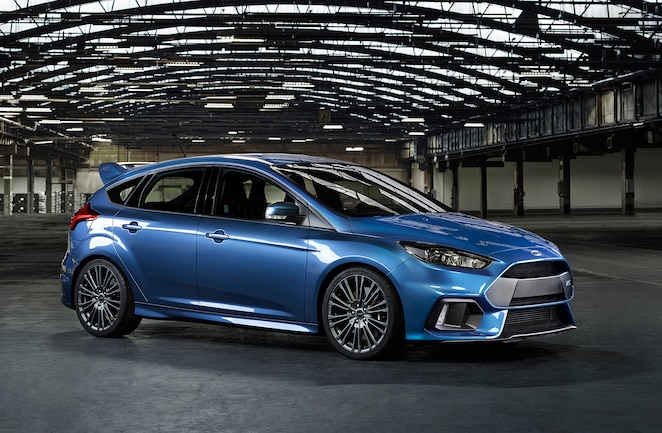 World-renowned Gymkhana star Ken Block drove the Focus RS onto the stage in Cologne, Germany, and fans around the globe witnessed the serious of controlled slides and drifts as Block navigated the Ford facility, ending on the stage to show off the newest Ford. The all-new Focus RS will be sold around the world, including the United States, and produced for all markets at Ford’s Saarlouis, Germany, manufacturing plant beginning late this year.

Block also served as a consultant on development of Focus RS. The Focus RS is the latest machine from Ford Performance, a team that will bring more than 12 performance vehicles to global customers by 2020.

“The Focus ST and Fiesta ST showed that we can achieve sporty steering feel with an electric power-assisted steering system, and the RS raises the bar,” said Dave Pericak, director, Global Ford Performance. “We set out to provide drivers with steering that is very direct, precise and well balanced – and the RS delivers.” Ford engineers worked closely with Michelin to develop a choice of high-performance 235/35R19 tires to complement the driving dynamics of the Focus RS: a standard Pilot Super Sport tire for every-day use, and – for the first time on an RS – an optional Pilot Sport Cup 2 tire for enhanced vehicle dynamics on the track.

This global car was engineered by a select group of Ford global engineers, who are a part of the new Ford Performance team. And this RS follows in the path of previous Focus RS models, which were available in 2002 and 2009. Ford stated it is the 30th version to wear the legendary RS badge. European Ford fans will remember the 1970 Escort RS1600 with 16 valves, 1985 Sierra RS Cosworth with turbocharging and radical aerodynamics and 1992 Escort RS Cosworth with four-wheel drive.

“The all-new Focus RS is a serious machine with high-performance technology and innovative engineering that sets a new benchmark for driving exhilaration on the road and track,” said Raj Nair, group vice president, Global Product Development, Ford Motor Company. “The RS line has a proud history of technical breakthroughs that have migrated to mainstream Ford vehicles to benefit all of our customers, and the new Focus RS is no exception. It’s a great example of our passion for innovation through performance, and creating vehicles that make people’s hearts pound.”

The new Focus RS raises the bar in terms of styling. The rally inspired design incorporates an aggressive front fascia with a low splitter to chop through the air, and a rear spoiler. Those are matched with side skirting to provide a balance of downforce for real-world performance.

The RS also ushers in Ford’s latest SYNC® connectivity system. “We are acutely aware of the benchmarks we have set ourselves with RS performance models through the years, and rest assured this new car raises the game to a new level,” said Jim Farley, president, Ford of Europe, Middle East and Africa.

“Just as important is the fact that with technologies such as EcoBoost, we are able to demonstrate how an innovation that powers almost every car in our range can also be the heartbeat of our finest performance cars,” added Farley.

The AWD system is utilizes a pair of electronically controlled clutch packs on each side of the rear drive unit and are designed to control front/rear torque split. This is far more advanced than other systems that simply control a front/rear split. Ford’s Torque Vectoring can now manipulate side-to-side torque distribution on the rear axle – which results in quicker and more controlled turn-in, better grip at the limit, and it allows oversteer drifts for maximum fun. The Focus RS will achieve over 1.0g in cornering grip and we imagine it will accelerate quite will with what we’ll estimate at 330-340 horsepower.

According to Ford engineers, the on-board computer controls the rear drive unit to continuously adjust the front/rear and side-to-side torque distribution. This provides the proper drive and grip in a dynamic, real-time fashion. “It reads inputs from multiple vehicle sensors 100 times per second. A maximum of 70 percent of the drive torque can be diverted to the rear axle. Up to 100 percent of available torque at the rear axle can be sent to each rear wheel.”

In lay terms, what this means is that in a corner, “the unit diverts torque to the outer rear wheel immediately based on inputs such as steering wheel angle, lateral acceleration, yaw and speed. This torque transfer has the effect of “driving” the car into the bend, achieving improved turn-in and stability, and virtually eliminating understeer.”

Ford told us the balance will be neutral at the limit, with the driver being able to induce oversteer, which is beneficial in drifting. We’re guessing Block had his hand in that.

The technology is just amazing. To further enhance the driver assist, the AWD system works in conjunction with the vehicle Electronic Stability Control. This means Ford will give you performance and safety. Ford added that, “Other exclusive chassis features include sports suspension with spring rates, bushings and antiroll bars – all of which are stiffer than those found in Focus ST, and two-mode switchable dampers, which offer a firmer setting for track driving. A carefully tuned electric power-assisted steering system working in combination with a more rigid front suspension knuckle design and shorter-link arms delivers connected and responsive steering with outstanding feel.”

It’s no shock that Ford went with the 2.3L EcoBoost, but it’s been boosted, literally, to produce over 320 horsepower. Ford Group VP of Global Product Design Rai Nair stated, “This takes the mark to an entirely new level. It will meet the expectations of owners world wide with breakthrough technology.”

The EcoBoost engine shares architecture with the all-aluminum 2.3L four-cylinder engine in the 2015 Mustang, but has been “breathed on” quite a bit. Upgrades include a low-inertia twin-scroll turbocharger with larger compressor, and a monster intercooler. Additionally, the cylinder head was tweaked for better flow, its material improved, and the block and head gasket was also modified to withstand greater pressure and power. Those hot rod tricks are the keys to better airflow and lowered air charges and that often results in big power.

There’s also an improved intake manifold and freer-flowing exhaust, that gets an electronically controlled valve in the tailpipe that helps optimize the balance of back pressure and noise output. We’re sure it helps the Focus RS produce the proper snap, crackle and pop on decel!

Engineers worked hard to ensure proper cooling by, as Ford put it, “creating additional space within the front of the vehicle to house a significantly larger radiator pack that provides the level of cooling demanded for hard circuit use.”

So, you’ll get power and reliability whether driving to the grocery store, or traversing a dirt road at the limit. And Ford also promises you’ll be smiling when you tip into the gas, as low-end and mid-range power is spot on—now the little 2.3L screams, too, with a maximum rev limit of 6,800 rpm!

“The six-speed manual transmission has been optimized for the enthusiast driver with a shorter gear lever to deliver faster and more accurate shifts. Both the transmission and the clutch have been upgraded with stronger components to cope with the engine’s increased torque output. With its high-efficiency EcoBoost design featuring direct fuel injection, twin independent variable camshaft timing, advanced turbocharging and Auto Start-Stop as standard, the engine also delivers significantly improved fuel consumption.”

To make a mark in the Hot hatch category, a vehicle require stunning looks to match the AWD performance. The RS wears a trapezoidal grille that matches the current crop of Ford vehicles, but is enhanced with a splitter, and big openings to maximize engine cooling. It sits hunkered down and ready to fight. Scoops and cladding work to manipulate airflow for downforce and brake cooling. Out back is a diffuser and a rear spoiler to keep the air moving for best performance.

Finishing off the package is a quartet of hues including Nitrous Blue, a vibrant four-coat metallic finish exclusive to RS (we predict this to be a big hit), Stealth Gray, Absolute Black, and Frozen White. The included photos show off the special “show-only” Liquid Blue paint first seen on the all-new Ford GT, Shelby GT35R and Raptor F-150 at the North American International Auto Show in Detroit last month.