A Legend In It's Own Time 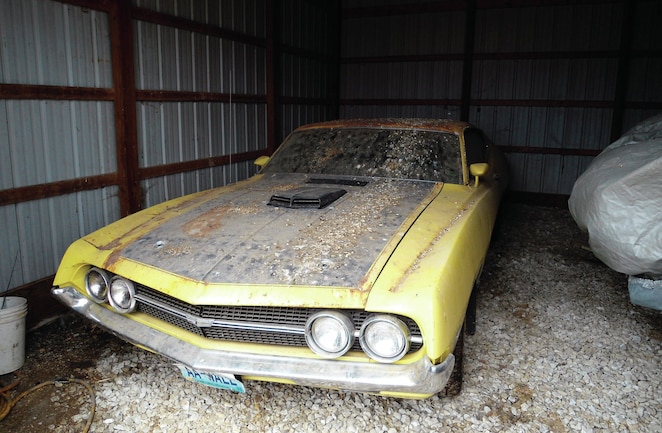 Mark Watkins' ears perked up when his friend Jim Pierce said, "You know, John never did get rid of his old Torino. Brenda, his widow, still has it. Maybe she would sell it?"

Mark, who recently retired from the highway department, drove a '57 Chevy in high school. Before he graduated in 1976, he got to street race his buddy Doug Ward's 429 Cobra Jet 1970 Ford Torino.

"They were so long on power," Mark says. "I was a Chevy guy, but I have to admit that was the toughest engine. It went through three or four high school kids and never got overhauled and didn't need it. It took it."

Mark laughed as he reminisced of those glory days of the mid '70s when leaded premium was 60 cents a gallon. His buddy bought the 429 Cobra Jet/four-speed Torino off a used car lot in Downing, Missouri, for $1,300.

She didn't know if she could sell. She really didn't want to let it go.

Mark Watkins and his friend Jim Pierce went to look at the Torino Cobra. The car appears complete except for the wheels, which are vintage slotted mags from the ’70s. The rear window louvers (slats) are factory. This model year Torino is notorious for rusting around the rear window glass.

Mark says, "He didn't know this thing had that kind of power. But did it ever make history. This thing had a name to it, the Torino. It drove around town and everybody looked at it. It was kind of like a legend in its own time.

"We were going up against a Fairlane one time, heading between Lancaster and Downing. The Fairlane was trying to outrun us. Everybody thought it ran good. He was running 110. So I pushed the pedal on down and was still in Third gear. I buried the speedometer at 120, shifted into Fourth, and flew past the Fairlane like it was an afterthought."

Mark said the rearend was "super high geared." He remembered a set of 2.72s.

"We weighed that car one time. I think it weighed 4,100 pounds. So, weight went against you for drag racing right from the get-go."

Doug Ward bought the Torino for its swoopy fastback body style. He sold the big-block Torino to his friend John Wall, who was a couple years younger. John had his fun and sold the Torino to another high school kid. Finally the car ended up wrecked and in the junkyard.

Meanwhile, John hunted another Cobra Jet. Instead of a regular Torino, he bought a '70 Torino Cobra with factory Bright Yellow paint and a flat black hood. According to Mark, this car had "the whole deal": 429 Super Cobra Jet, Drag Pack, shaker hoodscoop for ram air, rear window slats, four-speed, and a 4.30:1 Detroit Locker rearend.

John's plan, Mark recalls, was to "restore and kind of make a drag car out of it." However, at just 25 years of age John was killed in an auto accident. The accident had nothing to do with the Torino or high speed. The Cobra "kind of got shuffled off to the back," Mark recalled. It moved from the back of the house to an old metal shed.

When Mark retired, he decided he wanted an old muscle car. So he called up John's widow, Brenda. Was the Torino Cobra for sale? "She said she wasn't sure. She said they didn't need it."

The engine isn’t just the Cobra Jet. It is the Super Cobra Jet with a shaker scoop for ram air. The 4.30 gears in the factory Detroit Locker make this Ford a tire-burning beast.

I was a Chevy guy, but I have to admit that was the toughest engine

The real news was the car actually belonged to Ashley, John Wall's daughter.

Brenda was cooperative. She left the barn open so Mark could look over the car. He talked to Ashley about a possible purchase. "She didn't know if she could sell," says Mark. "She really didn't want to let it go. I told her I understood and said I'd like to talk to Jerry Heasley and take some pictures, 'cause he's got a Rare Finds column in Muscle Car Review. I said if nothing else, John would have really gotten a kick out of seeing his old car in a magazine."

Mark bought a digital camera just to shoot some high-resolution images for this column. The photos show a car that has been sitting for obviously a long period of time, covered in dirt inside a barn. Mark noticed rust around the back window. The car could use a new trunk lid. He contacted a good bodyman, who advised that the car needed to be stripped and dipped.

Mark said, "The torque the first one had with the high gear was amazing. But I can just imagine what this thing would be like with a 4.30 rearend."

Maybe one day Mark will find out, if Brenda decides to sell her dad's car. Mark would be a likely candidate to spend the time and money to restore this Torino to its former glory.

This Torino Cobra came with bucket seats from the factory. The horizontal speedometer read to 120 mph. The factory console is out, but it’s in the barn, just not with the car.
Do you have a Rare Find story to share? Contact Jerry Heasley at jerry@jerryheasley.com.

This past week has been one of the busiest weeks in the car industry, thanks to the SEMA 2013 Show held in Las Vegas every year. One of the brightest and most envied accomplishments at the event comes in the form of the Mother’s Shine Award.

This 1969 Ford Torino GT Fastback is one of a kind, with a Sterling Gray basecoat that is sleek to the eye.

It's a great thing experimenting with an engine to see what works and what doesn't. This 1968 Ford Torino GT was our test subject and we decided to install the new Spectre Performance Cold Air Induction to see if it really made much difference. - Modified Mustangs & Fords