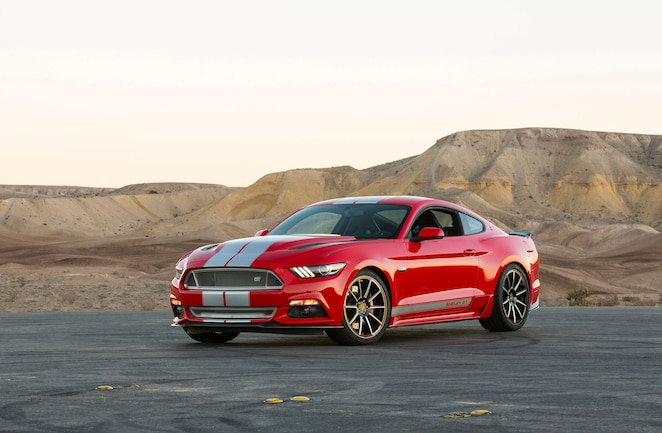 You’d be forgiven if you thought the 2013-14 Shelby GT500s were the be-all, end-all in the orbit of otherworldly late-model Mustangs. Up until now, in fact, they were. With 662 horsepower and 11-second quarter-mile performance right off the showroom floor, they pretty much ruled the roost for the better part of a year or more.

But just barely 6-8 months after the last one of those beasts rolled off the Flat Rock, Michigan production line, Shelby American has released its latest offering on a post-title basis as was the case with its S197, GT500 Super Snake models.

The ’15 Shelby GT will soon be able to be created for owners who buy S550 Mustang GTs and have them sent to Shelby’s recently moved-into headquarters just south of the Las Vegas Strip. And not to knock the ’07-’08 Shelby GTs that were produced, which were cool cars in their own right, but this thing is on another level to be sure.

And when power levels on par or beyond the ’13-’14 GT500s are combined with the S550’s world-class chassis platform, it results in a true supercar with a performance envelope of many cars costing twice as much.

Shelby’s close alliance with Ford is front and center here with the 435-horse, Coyote 5.0-liter boosted with a Ford Racing supercharger to 625 ponies. This takes it well beyond even the upcoming and vaunted GT350’s flat-plane-crank 5.2-liter screamer, slated to be in the 500-horsepower range. But that’s not the only thing added to the first S550 Shelby.

Several other Ford Racing-sourced pieces are in the mix including a Borla exhaust system with Shelby-labeled tips. There are also beefier FR half shafts for the S550’s IRS. Underpinnings are enhanced by a Ford Racing handling pack that includes upgraded shocks and struts, lower-ride-height springs and bigger antisway bars. For cars with the MT-82 manual trans and 3.73 gears, there’s also a short-throw shifter, which, by the way means an automatic-equipped Shelby GT can also be built should you like.

It doesn’t end there either, as brakes and the wheel/tire combo also gets a full update. Big Wilwood front rotors and calipers are in the mix along with truly gorgeous Shelby Venice wheels. These are a Shelby exclusive built by Weld Racing and measure 20x9.5 inches in front and 20x10.5 in back. The tires are Michelin Pilot Super Sports and are suitably ginormous—275/30ZR20s in front and 305/30ZR20s out back.

There is so much more to cover on this probably best-ever Mustang-based Shelby, so you’ll just have to keep an eye out for a more detailed feature in a near-future issue of M&FF. But we we’ll leave you with one final tease: There is reportedly an option for engine output to hit the 700-horsepower mark--nipping hard on the heels of those dang Dodge Hellcats. That oughta also cover the ’13-’14 GT500s, eh?