On- or Off-Road? You Decide 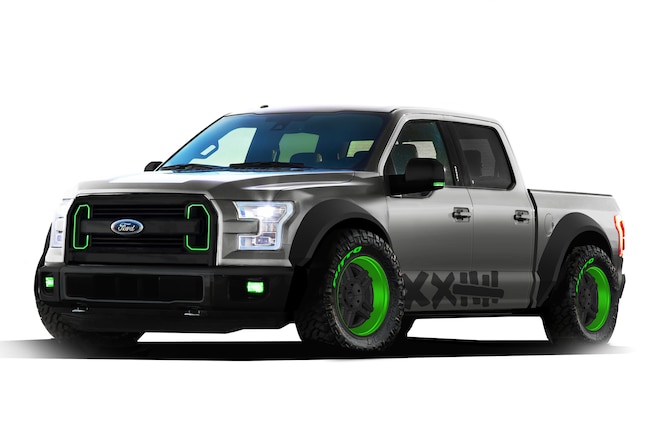 Ford announced two custom vehicles today, both based on the 2015 Ford F-150 and bound for the 2014 Specialty Equipment Market Association (SEMA) Show in November. Ford hopes one of them will be named SEMA’s “Hottest Truck,” an honor that’s gone to a Ford F-Series for the past four years. Aside from sharing a common starting point, the two concepts could not be more different.

The Vaughn Gittin, Jr. Street Truck, above, looks like the love child of a NASCAR stock truck and a WRC rally car. It will sit on an Air Lift Performance air suspension, lowered over some seriously chunky, wide tires. Recaro seating inside the truck will help keep passengers in place during fast, drift-happy transitions from corner to corner. We want to see this thing tow one of Gittin’s drift cars to a track and then watch them both run rings around the competition.

The truck, pictured above, is called the Deegan 38, built in collaboration with motocross star Brian Deegan. The off-road-ready truck brings together parts from FOX Racing Shox, Mickey Thompson Performance Tires and Wheels, Rockford Fosgate, and many others, and it will have Ford’s 3.5L EcoBoost V-6, which makes 365 hp and 420 lb-ft of torque in stock form. You can bet that the show truck will make even more power than that. The Deegan 38 looks like it would be right at home blasting across the desert landscape, à la SVT Raptor.

The SEMA Show starts November 4. You can bet we’ll be on hand to see both these trucks in person.