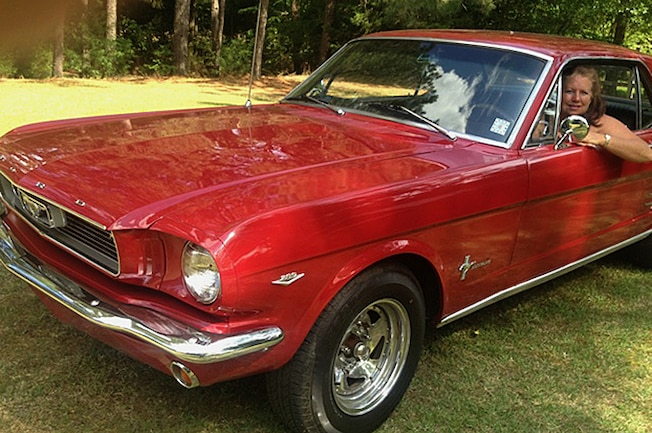 When Betsy Montgomery left her shiny red 1966 Ford Mustang in her parent’s driveway back in September of 1992, little did she know that it could be the last time she might ever see it again.

As a young teenager in ’72 ready to get her driver’s license, Betsy begged her dad to check out a 1966 Ford Mustang sitting in a yard just a couple of blocks from her house. After some convincing, Betsy’s father then purchased the 1966 Ford Mustang for just $600 after talking the owner down from $750. Since it was not the family’s primary vehicle, everyone casually shared the car and it quickly became a big part of the family.

An ordinary day in 1992 quickly became a tragic one when Betsy's red Mustang was stolen right out of the driveway from where she left it. Needless to say, the Jackson, Mississippi resident was crushed. “We all cried and all looked for it,” Betsy said. “I never thought I’d see it again.”

Fast forward to October 2012, Betsy just returned home from a cruise to Mexico. Soon after, a strange voicemail was left for her from a man located in California wanting to speak with her about “some stolen property.”

Worried something may be amiss after her recent vacation, she called him back the next day. The man, who identified himself as Lou Koven with the National Insurance Crime Bureau (NICB), wanted to know if Betsy had ever reported anything as stolen. The only thing that came to mind was the 1966 Ford Mustang that was stolen 20 years prior. That’s when the Koven replied with something that changed everything – “we’ve recovered it.”

The stolen classic was finally discovered when the Vehicle Identification Number (VIN) was checked right before the car was due to board a ship to its new owner overseas in Australia. That's when the stolen 1966 Ford Mustang showed up on the hot list and was traced back to Montgomery.

Still in disbelief, friends were worried that this whole situation could be a scam. After talking to an officer with the California Highway Patrol, she soon realized that it was far from a hoax. Curious of the current condition of her long lost pony, the trooper told her she’ll likely be “pleasantly surprised.”

Betsy was in disbelief of how they were able to contact her about the stolen car. Within the past 20 years, her phone number, address and everything had changed.

The classic Mustang was delivered back to Betsy on a trailer full of cars. Seeing that familiar face pull up brought on a flood of memories of her late father and growing up with it in the family.

“Wherever it has been over the past 20 years, it was well taken care of,” Betsy said. “I was told that it had changed hands many times.”

Just as the trooper told her, the condition was surprising. The body only had a few nicks and scratches which likely happened during transport, and it was missing the battery and carburetor.

And just a few days ago, Betsy picked the classic car up from the "beauty shop", also known as Porter's Body Shop, where she had the minor scrapes, cuts and bruises all fixed up leaving the exterior of the classic like new.

Betsy wanted to thank Cade's Garage out of Brookhaven, MS for helping her get the classic car home and for making sure everything was mechanically sound and taken care of.

With a car that was bought in the early 70's for just $600 could easily be worth over $30,000 today. But don't expect Betsy to part with it this time, this sentimental 'Stang will stay safe and sound now that it is back home where it belongs.