As if the Empire State Building wasn't high enough, the 2015 Ford Mustang conquers the final frontier. 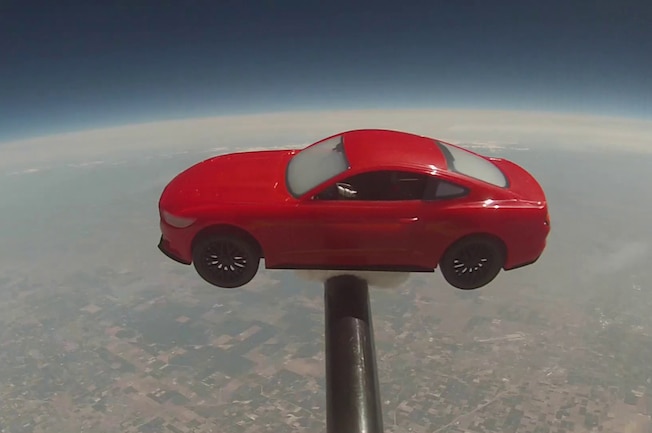 After already holding down the 86th floor observatory on top of New York’s Empire State Building this year, it still wasn’t quite high enough for the new thrill-seeking 2015 Ford Mustang.

The Mustang 50th Birthday Celebration continues on and this time it is out of this world, literally. The 2015 Ford Mustang has conquered yet another feat, launching into the final frontier – outer space.

Just last week, a couple of guys from the Ford sales team decided to take things up a notch. Michael Sego, Ford’s sales manager in San Francisco, and Steve Kubits, partner at Big Valley Ford in Stockton, California, decided to launch their very own 2015 Ford Mustang into space.

This Revell mini 2015 Ford Mustang that you see was a souvenir handed out at various auto shows, one being the 50th Mustang Birthday Celebration in Charlotte. Who knows which auto show they received theirs from, but I’m sure nobody expected that the tiny toy would take on quite the adventure.

Hooked up to a weather balloon complete with a GoPro Hero HD3, the mini Mustang was launched 21 miles up into the sky, before crashing back down to Earth just 74 minutes later.

You can check out the footage here below.