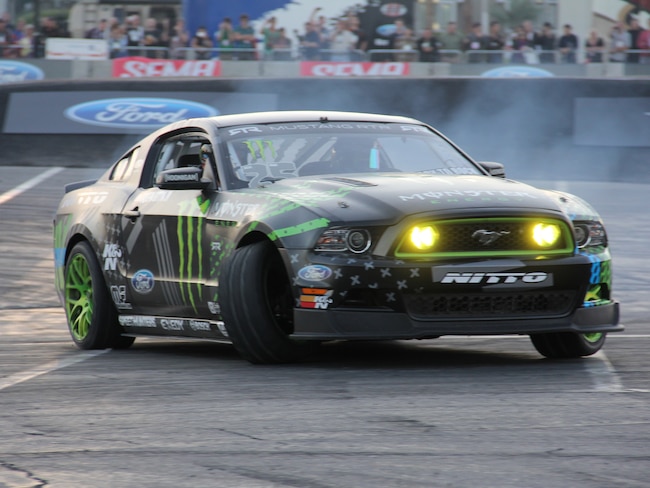 It took two trips covering over 1,200 miles but I finally got my ride with Mustang drift star Vaughn Gittin Jr.

Yes, it was worth every mile.

The saga began when Scott Black from TimePiece PR invited me down to south Florida for a ride-along with Gittin during practice sessions for the Formula Drift competition at West Palm International Raceway. The visit also triggered the idea for this month’s story about why it’s important for Ford, and the Mustang in particular, to be involved with drifting, a sport that many of our readers don’t comprehend. Thanks to the marketing effort behind his brightly-colored Monster Energy ’14 Mustang GT, you’d have to be hiding under a rock to miss Gittin’s influence on the Mustang world. He’s prominently displayed in Nitto tire advertisements and can be seen smoking sideways for demonstrations at major Ford events, including the Carlisle Ford Nationals, where I found myself standing patiently with a helmet to await my ride.

The weekend before at West Palm, my ride-along opportunity had been postponed when Gittin nicked the tire wall on his first practice pass, nearly ripping off his Mustang’s rear bumper and damaging the rear suspension, requiring overnight repair. Gittin’s wife/marketing director/travel agent Abigail promised a make-up ride at Carlisle while Vaughn sat dejected in the press bleachers, obviously making mental notes while observing his fellow competitors during the practice that he was missing.

At Carlisle, I dutifully showed up at the appointed time to sign the waivers and get my arm band. As it turned out, there were 10 other riders, winners of a ride-along raffle. Abigail told me that I would likely get my ride after the raffle winners.

However, when I slipped through the mob surrounding Carlisle’s autocross track, Abigail ushered me straight to Gittin’s Mustang. Crew members quickly strapped me into the passenger-side racing seat as Vaughn blipped the throttle. Then we were off and spinning.

In the haste, no one thought to warn me that I was riding along on Gittin’s “show” demonstration for the Carlisle crowd. I suppose it was best that I didn’t know…

Pure and simple, Gittin’s Mustang is a race car. The exhaust is loud and the interior is Spartan with no amenities other than what’s needed for competition. Thankfully, there is a roll bar within grasp as Gittin launches hard and roars sideways—first to the right, then to the left—across Carlisle’s paved autocross pad. Just before reaching the end of the pavement and the grassy area beyond, Gittin grabs the hand brake, throws the Mustang into a slide, and skillfully feathers the throttle to precisely maneuver sideways through the 90-degree turn with the front bumper rotating just inches off the pylon that marks the innermost portion of the turn. From there, it’s a 10-minute ride that beats anything at Disney World—sideways down the straight-aways, Tilt-a-Whirl donuts in the middle, sliding through every turn, smoking all the way. At one point, Gittin miscalculates and the rear of the Mustang bowls over a series of pylons to put the rear tires into the grass. Gittin doesn’t flinch, keeping his foot in the throttle to send grass and gravel flying as he continues on his slip-sliding way with a passenger whose grip I fear may be putting a dent in the roll bar.

At the end of the exhibition, Gittin throws the Mustang into a 180-degree spin, then holds the car in place for an extended burn-out that fills the interior with tire smoke. Through the haze, I can see the crowd cheering him on, so I give a timid thumbs-up out the side window. Looking over, Gittin has his fist thrust outside and over the roof, shaking it as if to say, “I’ve got this bad-boy Mustang under control!”

I suppose that’s the difference between a Formula Drift star with attitude and an old guy who is only there to write about it.