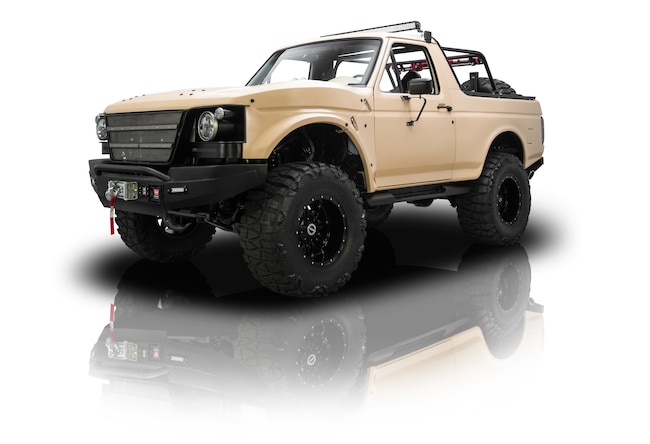 RK Motors of Charlotte is known for restoring, reselling, and building classic, muscle and high-performance vehicles. RK Motors picked up a project to restore and customize a classic Ford Bronco. This isn’t your ordinary project, but a project that will honor a fallen hero – US Navy SEAL Adam Brown. This truck was part of a “Give Forward” campaign where the public donated $65,319,660 and corporate sponsors such as 5-Hour Energy, RoushYates, BDS Suspension, and ESAB provided parts, services and additional funds for “Project Fearless.” This project, a 1991 Bronco was recently restored in Mooresville, NC at the RK Motors Performance Center and unveiled to Chief Brown’s family.

“When I first heard of Chief Brown’s incredible bravery, I was moved by his sacrifice,” said Rob Kauffman, Owner and Chairman, RK Motors, LLC. “While his service as a Navy SEAL was admirable, his battle to overcome personal demons to reach the U.S. military’s top tier was inspiring. We felt compelled to help rebuild Chief Brown’s Bronco as a tribute to him and his family. It was just the right thing to do.”

Navy SEAL Chief Adam Brown was killed on duty in Afghanistan back in 2010. According to Eric Blehm’s book called Fearless, Brown, a 12-year veteran, was killed after placing himself on the front line to protect the members of his unit. His actions saved the lives of several men, and he was awarded the Silver Star Medal for his heroism. Brown is survived by his wife and two children.

“We understand that Mrs. Brown bought the truck for Adam and he loved driving it,” said Joseph Carroll, RKMC CEO and president. “But overseas tours made it difficult to maintain it. With his friends and other sponsors, we returned the Bronco to duty for his family as a symbol of Chief Brown’s life.”

In 1991, the Ford Bronco celebrated its 25th-anniversary year. It was powered by a fuel-injected V-8 engine and was considered a cutting edge American off-road truck. Now the truck sports custom bodywork covered in “Desert Tan” paint with upgrades scattered throughout the build transforming the Bronco into a modern vehicle.

“The initial goal was to simply restore the truck,” said Darell Johnston, RK Fabrication and Team Leader for the Bronco Project. “But as we got to know the Brown family, their vision to make the truck something much greater, much like Chief Brown lived his life, took the build in a whole new direction. So we stripped it down to the frame and then methodically began building the ultimate go-anywhere, do-anything vehicle. It is a true reflection of the man we are honoring.”

RK decided on a new heart for the Bronco, a 5.0L Coyote Aluminator engine capable of over 400hp. Mated to the new Coyote is a Transzilla T56 six-speed with a Centerforce dual friction clutch. A Ford 8.8 rear with Yukon 31-splines was installed in the rear with the front axles gaining power from a Detroit Locker featuring 4.56 gearing. The suspension was modified with a BDS lift system, Warn locking hubs, and a Power Slot brake system was added for good measure.

Now a one-piece fiberglass hood flips forward to allow access to the engine. Other goodies include fiberglass wheel flares, custom bumpers, a Warn M12000 winch, “ammo storage” boxes on rails, and custom Superbright LED lighting. Emblems were shaved and smoothed, and the side trim was deleted to give the Bronco more of a modern feel. The Bronco sports 18x12-inch Fuel off-road wheels wrapped in 38x15.5 Nitto Mud Grappler tires.

The vehicle was displayed at the RKM Collector Car Auction from Oct. 31 – Nov. 3, 2013 at the Charlotte Convention Center. It will make another appearance at the Charlotte International Auto Show from Nov. 21 – Nov. 24 in the convention center.

For more images of this special Bronco, please hit up http://myclassicgarage.com/social/profile/operation-fearless. Those interested in RK Motors Charlotte or the vehicles available in its inventory, can visit www.RKMotorsCharlotte.com or call 704/596-5211.