A little over a year ago, the bar was raised and the record was set in standing mile racing by one BADD GT 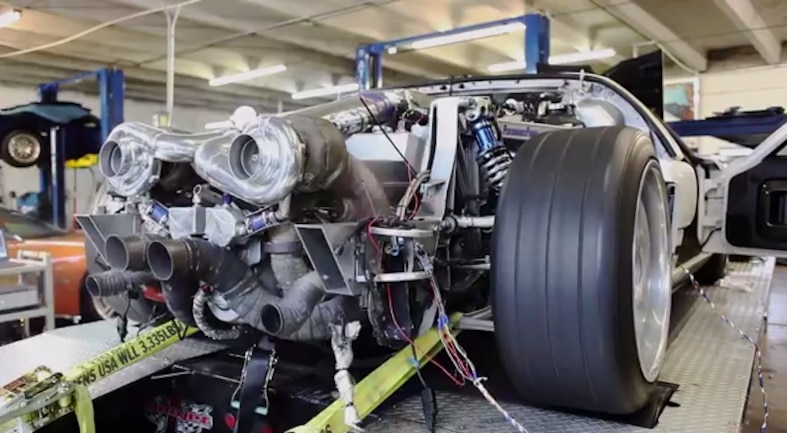 Sure it’s Halloween and SEMA is bearing down on us like a scud missile, but let’s stop for a second to salute a real missile – the fastest car in the world. On October 16th, 2012 Johnny Bohmer, owner of Performance Power Racing, had Guinness World Records certify that his Ford GT was indeed the Fastest Standing Mile Street Car by achieving 283.232mph.

Bohmer said the objective of the project was to push their design capabilities by pushing the limits of performance. In the process, the West Palm Beach, FL based R&D company (working with Pratt & Whitney) helped develop Pandalloy – a high strength, high temperature tolerant aluminum alloy. By implementing aerospace technology in an automotive application, Performance Power has proven that the alloy can be used to lower emissions, increase fuel economy, and decrease a vehicle’s carbon footprint. To a hot rodder this seems to be a strange conclusion to the testing at NASA’s Kennedy Space Center, but we certainly can’t complain about the side benefits.

“By NASA allowing us access to a one-of-a-kind facility, we are given the opportunity to explore these technologies and share their benefits. An immense amount of research and development went in to this 3-year project and we are just scratching the surface of where these systems can be utilized outside of the racing arena,” Boehmer stated.

The curbweight on this missile was a hefty 3,890-pounds, which utilized a twin-turbo system to boost the Pandalloy-fortified Mod motor to around 1,700 horsepower. The GT had a fully functional A/C and audio system, and was a registered and street legal daily driver. In this trim, it managed 19mpg on the highway and 11mpg around town. Max speed was said to be over 340mph, and it accelerated from 0 to 150mph in just 7.4-seconds. In case you are wondering, acceleration g-Forces hit 1.3 G’s. Yeah, it’s pretty much all-around awesome.

Are you looking to own a rare and powerful American supercar? One 2006 Ford GT will be crossing the Mecum auction block at the end of this month on Saturday, November 23 at 2:15 p.m. (Lot S114.1). This rare beauty will likely turn heads on the street and not just from Ford enthusiasts.

Come take a glimpse at Niche Performance Industries' 2006 Mustang GT coupe, which was first appeared at the SEMA blow-out show in Las Vegas. Tune in for more details, features and photos only in 5.0 Mustang & Super Fords

Come take a look at Brian Ellis' 2006 Mustang GT, featuring a Vortech S197 package along with a V-3 Si-Trim supercharger. Tune in for more details and photos only in 5.0 Mustang & Super Fords Magazine

Check out the complete guide to finding the perfect wheels and tires for your Mustang along with easy buying tips to use. Read on for more details, tips, and reviews only in Modified Mustangs & Fords