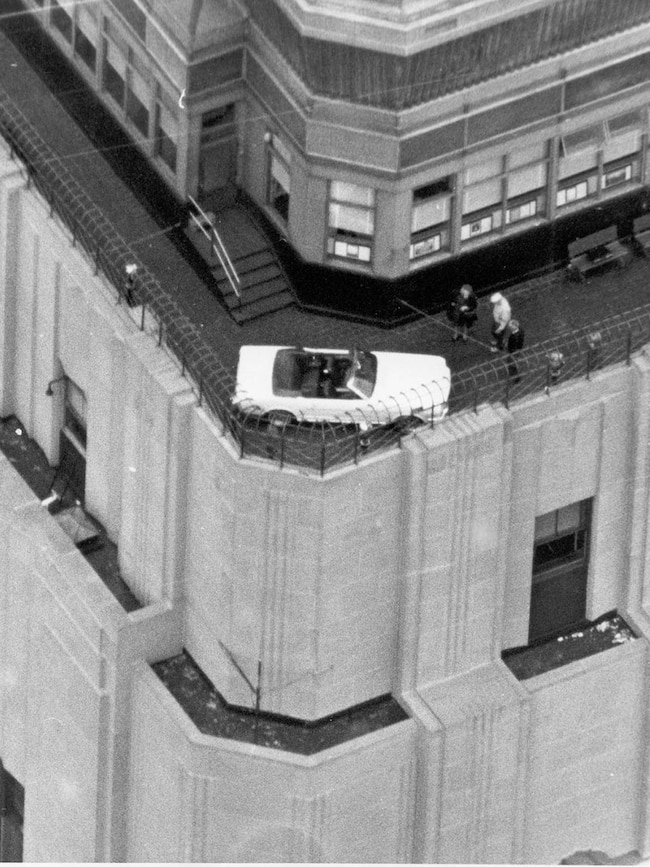 Before the days of social media marketing to help spread the word, to get mentioned in the headlines was a tad bit harder to pull off without doing something a little bit crazy. In the fall of 1965, Robert Leury, Vice President and General Manager of the Empire State Building, invited William Benton, the Ford Division Merchandising Manager, over for a quick meeting. With the Mustang frenzy taking over the news, Leury had an idea.

Benton then returned back to Ford’s headquarters and formed a team of eight. The setting was established, but just how were they going to get a 1966 Ford Mustang onto the 86th floor observation deck of the world’s tallest, most iconic building? This was indeed a challenge considering the spire and the sloping upper architecture of the Empire State Building was too complex and dangerous for any helicopter. It was time to conjure up a new approach.

Ford engineers made the trip to New York with measuring tapes in hand and carefully took note of the building’s dimensions including halls, doorways, rooms and elevators. That’s when they found out just how they were going to get that little ‘66 Mustang convertible up to the top – slice it into pieces, bring it up through the elevator and reassemble it back together up on the observation deck. This needed to be a clean operation. That meant no slicing the sheet metal, trick hinges or fake fiberglass panels. Everything had to appear to be a stock production Ford Mustang.

Once back in Dearborn, the team went back to work. The Mustang was a total of 15 feet long, which had to fit into a seven-foot-tall elevator. They cut the body of the white convertible into four main sections – windshield; front end; center body and rear end.

To simplify access, the center console and doors were temporarily removed. Next up, the transmission, engine and driveshaft were all removed from the body.To reassemble the car, a series of brackets were designed and fabricated so the pieces could slide together and bolt down in place, enough to act as a display car. Needed to move the heavy pieces around, a rolling dolly was built to guide the front and rear halves in and out of the elevators. Practice runs were made in similar elevators at the Ford headquarters in Dearborn and everything seemed to go as planned.

The date was set for 10:30 p.m. on October 20, 1965 to get this car to the top of the observation deck. Decked out in white overalls, they met at the bottom of the 1,472-foot-tall building. In front of onlookers, they disassembled the Mustang and started the trip as planned to get the parts into the elevator.

Just when things seemed to be going perfectly, the front section was exactly ¼-inch too tall to fit through the elevator door with the steering wheel in the way. With a few adjustments they were able to slip through the doorway. Once out on the observation deck, the team took the sections and reassembled the car around 4:30 a.m. with gusting 40mph winds. News helicopters hovered over the building to begin aerial photography. When 11 a.m. rolled around, the photographers had their shots and the car was disassembled once again and then put back together in the observation floor’s inner room where it met an estimated 14,000 visitors just that first day, and who knows how many visitors during the months that followed.

The spectacle created at the Empire State building was high-profile marketing that worked and attracted people to the showrooms that year. In 1966, Ford sold an impressive 607,568 Mustangs, which is the most ever in a single year. By March 1966, an incredible 1 million units were sold since its launch, about the same time the Mustang convertible sitting on top of the tallest building retired from the highest showroom floor around.