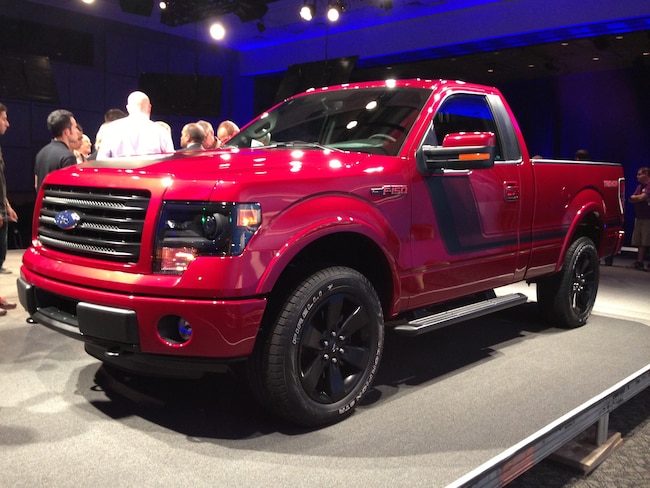 Meet the world’s first production EcoBoost truck, the 2014 F-150 Tremor. The heart of the matter is a 3.5-liter EcoBoost engine giving the Tremor that V-6 fuel economy without sacrificing V-8 horsepower and torque.

Combine the stealthy appearance with a short-wheelbase, and a 4.10 rear axle with an electronic-lock differential, and you’ve got a truck to be reckoned with. That’s the shortest final drive ratio offered in an EcoBoost F-150 for those looking for a faster accelerating truck.

“The new Tremor gives F-150 customers yet another option to drive a highly capable, distinctive performance truck with features typically found only in the aftermarket,” said Brian Bell, F-150 product marketing manager. “Plus, the Built Ford Tough EcoBoost engine is available for the first time in a short-wheelbase F-150.”

So how much is this bad boy making? With the highly-capable EcoBoost, it puts down 365 horsepower and 420 lb-ft of torque at 5,000rpm on regular 87-octane fuel. It also features twin independent variable camshaft timing, which helps with performance and fuel-efficiency and it reaches 90-percent peak torque from 1,700 to 5,000rpm.

The electronic-locking rear differential comes standard with both the two- and four-wheel drive versions and improves traction during takeoff.

MyFord Touch powered by SYNC comes standard in regards to connectivity. The physical interface for MyFord Touch has been revamped for those heavy-duty truck drivers sporting work gloves. The climate and audio controls have been moved to the center stack for easy access.

If interested, you can expect this regular-cab Tremor to go on sale sometime this fall. You can’t miss it with the custom FX Appearance Package featuring flat-black accents combined with 20-inch flat-black wheels, body side graphics, and black badges with red lettering.