How To Maximize Drum Brakes 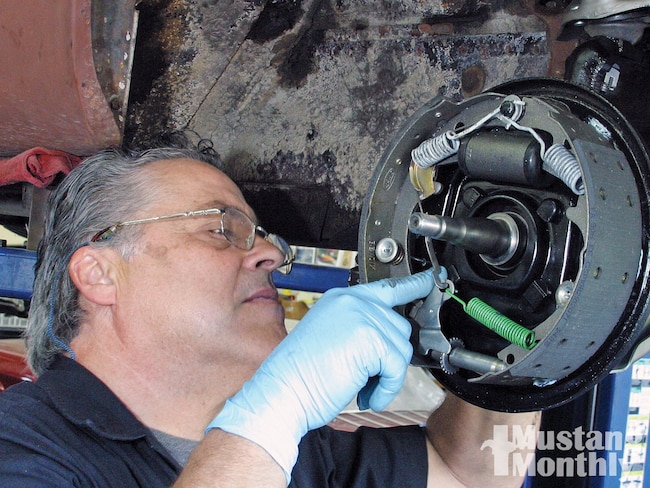 Classic Mustang drum brakes have never been big performers. Even when these cars were new, their drum brakes were problematic, noisy, and often pulled badly. Fade was terrible under hard braking, which is typical of most drum brakes, only it seemed worse on Mustangs.

Fade can happen when brake drums and shoes get extremely hot, causing several unpleasant issues that reduce stopping ability. Any way you look at braking systems, front drum brakes will never be as effective as discs due to the dynamics of each type of brake. Disc brakes tolerate heat better than drum brakes during hard braking. And because front brakes do most of the work when stopping, automakers ultimately switched to power front disc brakes.

OK, so we agree drum brakes aren't the most effective type of brakes. However, what if you're restoring a Mustang to the window sticker or Marti Report, or perhaps you're doing a six-cylinder hardtop with four-wheel drum brakes and have little choice? How can you get optimum stopping performance from old-fashioned drum brakes?

The best advice we can offer is to pay close attention to detail before getting started. Replace everything-drums, hardware, riveted linings, and hydraulics. Be prepared to sweat the details to ensure your Mustang's drum brakes are in proper working order to deliver the best possible performance.

Because most replacement parts these days are of unknown integrity from origins as vast as the planet, be sure to use genuine Ford Motorcraft parts because no other company has committed more time and money to research and development than the company that designed, engineered, and built your Mustang to begin with. Though Motorcraft parts are usually more expensive, they're worth the difference based on our experiences in nearly 40 years of working with classic Mustangs.

Motorcraft parts are manufactured and tested to the highest standards in the industry. When you do your brakes on the cheap, that's exactly what you're going to get when it's time to test them in a panic stop.

When it comes to parking brake effectiveness, nothing does the job better than a drum brake because they are self-applying by design. As shoes contact the drum, they tend to bind into the drum for better holding power. Disc brakes are not as effective as parking brakes, especially on older Mustangs with T-handle parking brakes. 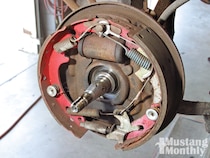 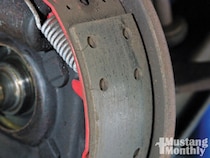 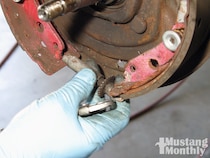 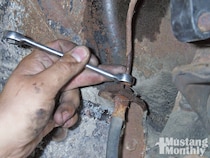 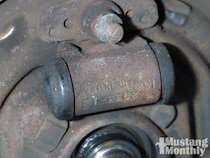 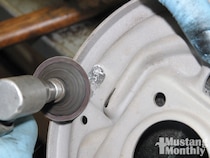 Brake bleeding isn't something you do once. When you install new brake hydraulics or open the system, expect pockets of air to remain after that initial bleeding. Although many people bench-bleed master cylinders prior to installation, you can do this on your Mustang. Begin bleeding at the farthest point away from the master cylinder, then do it several times until you have a firm pedal.