How To Install Four-Wheel Disc Brakes On A Fox 5.0

Fox-body Mustangs were never known for good brakes, and what was mediocre in the '80s is nearly unacceptable today. To get better brakes for your stock disc/drum Fox 5.0, you could cobble together some junkyard stuff, assemble a few aftermarket upgrades, or go to your Mustang's original-equipment manufacturer and source a single kit, full of Blue Oval-spec parts and pieces to transform your Mustang's braking system the way Dearborn engineers did for the ultimate Fox: the '93 Cobra R.

The Ford Racing Cobra brake kit (PN M-2300-K) for Fox Mustangs is one of the most complete we've ever seen. You can see the major pieces here, including the 13-inch slip-on front rotors, the front bearing hubs, new rear axle shafts, rear rotors, calipers, backing plates, parking-brake cables (two kinds to cover '87-'93), and more. Not shown are all hardware, fittings, and other sundry items needed to complete the job. No further purchases were necessary.

This kit is one of the most complete we've ever seen; everything needed to convert a stock four-lug 11-inch disc/9-inch drum Mustang to a five-lug four-wheel-disc system is included. It features 13-inch rotors in front squeezed by aluminum twin-piston PBR calipers and 11-inch rotors out back with Ford's own single-piston calipers. And you get everything here-not only the aforementioned rotors and calipers, but also the requisite front spindles and bearing hubs, rear axle shafts, flex hoses, hard lines, parking-brake cables, the master cylinder, the power booster, proportioning valves, and every nut, bolt, fitting, and clip to make it all work just like the factory. It's also accompanied by an excellent set of instructions.

This kit may seem pricey at first-$2,300 isn't chump change. But once you see what's included and what you'll have when it's installed, the price seems like a bargain. We got our system from YearOne, which may come as a surprise to those who consider this outfit only as a classic restoration parts outlet. YearOne is a Ford Racing dealer and carries many parts-performance and resto-for Fox-era Mustangs.

As for the installation, despite the fact that the entire braking system is being replaced, it really isn't that difficult. We did nearly the whole thing in one day, though that was in a professional shop with two experienced mechanics turning the wrenches. Ken Wessel and Rich Bellmund are the techs for Jimmy's Car Care in Lagrangeville, New York, and agreed to tackle our install on a Sunday (thanks to boss Jimmy Filardi for keeping the bays open). The job was done with fairly basic tools, and without having to maim our subject '93 LX coupe. In fact, only about three permanent modifications are required by the instructions, and we managed to reduce that to one: a parking-brake lever alteration. Call us pansies, but years of trying to return early Mustangs to their original form makes us reluctant to permanently change the newer ones. Who knows-someday we might want to put it back the way it was.

Actually, after sampling the new braking capability, changing it back is unlikely. Follow along as we illustrate what's involved; you could probably do this in a weekend in your garage without a lift. 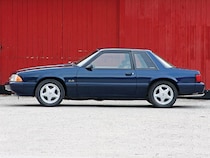 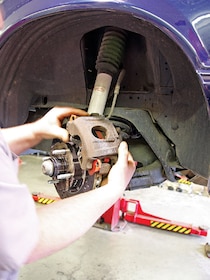 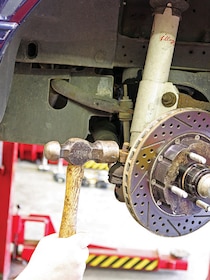