These days, installing 17-inch wheels from an SN-95 Mustang onto a Fox 5.0 is a relatively popular upgrade. Somehow, it creates a cool vibe that's different than swapping on aftermarket wheels. Not that there's anything wrong with aftermarket wheels for Fox-body Mustangs, but in this case, we're focusing on a few of the many available options from Ford Racing Performance Parts (FRPP). Updating a Fox-body 5.0 with a 17-inch wheel that, at one time or another, was a factory-installed design on '94-'04 SN-95 Mustangs is something we'd certainly like to see more of in the future as the Fox cars get older.

It would be difficult to show every style available from FRPP on one car since there are about a dozen 17-inch designs in the FRPP catalog, but it wasn't too tough for us to scrounge together three designs. In this case, we enlisted the '88 LX 5.0 convertible you've seen in our pages over the past year or two.

Representative of the legions of Fox-body Mustangs, we've lowered this particular car (May '05 issue) and also did a five-lug conversion, replacing the front brake rotors, rear drums, and rear axles to allow the five-lug wheels that came on all Mustangs after 1993. That "How-To" appeared in our Nov. '04 issue.

Take a look at the FRPP Web site and also get in contact with Mustangs Unlimited to see what other options are available. While there are clearly many other choices out there, one of the three styles shown here may be exactly what you're looking for when it comes time to update an old Fox with modern wheels while maintaining an OE look. 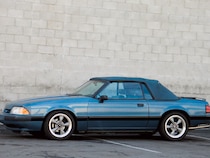 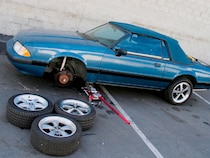 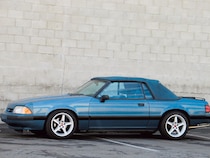 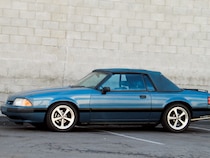 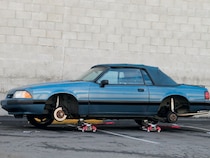 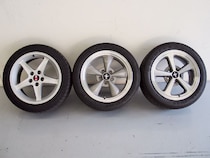