Newsletter
Sign Up today for our FREE Newsletter and get the latest articles and news delivered right to your inbox.
Home
Modified Mustangs & Fords
How To
Wheels Tires

One of our good friends has a '68 Mustang coupe that he's been driving using the original-equipment four-wheel drum brakes. While the drums were standard equipment for their day, front-disc brakes were available as an option on the Mustang even in 1965. Most Mustangs were delivered with drum brakes, however. We don't envy our friend when he has to drive on a rainy day, because wet drums can be a real bear to wrestle with when one side grabs and the other side doesn't. And this '68's drums are without power assist as well.

Don't bother dismantling the brake mechanism. Grab the T-bolts with a 5/8-inch wrench, and remove the retaining nuts from the backside of the plate.

When the chance came along for our friend to have his car utilized in a power disc-brake upgrade story, he was more than interested. The package was to include not only a conversion from drum to front disc brakes, but a power assist upgrade as well. These two improvements will bring his car out of the braking Stone Age in terms of both stopping performance and the effort required to operate the car's braking system.

We begin by removing the original-equipment drums. These drums are larger than those found on '65-'68 straight-six-powered Mustangs.

The Master Power Brakes power front disc brake kit (PN DB1521PANS) includes 11 1/4-inch vented rotors, loaded calipers with pads, caliper brackets, and a 9-inch-diameter power-brake booster with a dual-reservoir master cylinder. Also included is a combination valve kit, hoses, bearings, seals, and dust caps, as well as a replacement brake pedal and hardware. The kit has a list price of $849-not a terrible sum for braking peace of mind with all-new components. Performing the conversion isn't too difficult; we were able to install it over one weekend.

Join us as we walk you through the installation procedure for both the front disc brakes as well as a new master cylinder and power-brake vacuum booster. 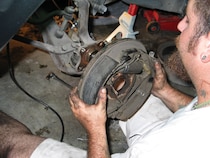 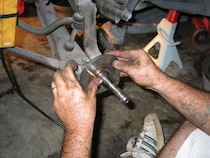 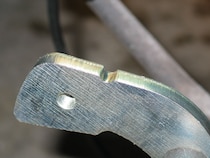 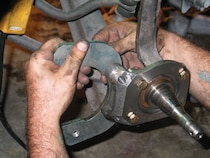 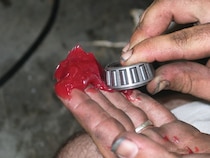 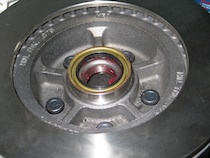