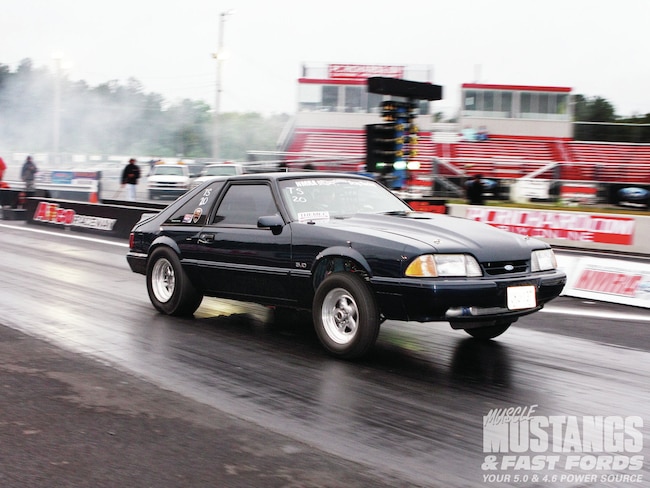 The sun was setting on the horizon as the competitors of the NMRA Spring Break Shootout-sponsored by Baer Brakes-rolled their street machines into the water box at Bradenton Motorsports Park (Bradenton, Florida) this past March. The field had shrunk from over 80 cars in True Street competition to a qualified field of 16 for the SBS, and finally, down to just two racers-front-runner Angela Padilla in Joel Cura's feared coupe and New Jersey's Mike Jovanis. The win went to Padilla, but it was the '89 Mustang LX of Jovanis that caught our eye. Jovanis was thrilled with the runner-up finish, and for his efforts, Baer Brakes tendered a $500 gift certificate, along with NMRA's cash and other prizes.

Despite it's innocent look, the LX with a turbocharger bangs off 8- second runs with regularity. The Jovanis hot rod is one to lust over for its mere simplicity and brutally quick times. Case in point, it whistles down the track to a best of 8.48 at 166 mph.

The interior is mostly stock, save for a full cage, electronics, a couple of gauges, and an aftermarket shifter that is connected to the Performance Automatic C4. The suspension system is stacked with bolt-on parts that most people buy, and the engine is a 347ci mill built by DiSomma Racing Engines with a Precision PT8847 (T4 flange) turbocharger on a B&G Custom Turbo Stage 2 Eliminator kit.

It's a street machine that can be replicated by any serious enthusiast, but getting the LX to this point has been a constant state of evolution over the past 13 years.

While the car has an abundance of power and plenty of hook to complement its mild street antics, the 166-mph blasts in a 3,250-pound vehicle have taken their toll.

"The car has stock brakes and a parachute. It's been getting harder to slow it down," Jovanis says. The remedy was to apply the Spring Break Shootout gift certificate and runner-up loot towards the purchase of Baer SS4+ Drag Spec brake systems for the front and back.

"We are trying to do something different then what is currently out there for the drag race market," comments Rick Elam of Baer Brakes." The latest trend is really fast stock suspension cars-adapting lightweight drag brakes to these heavier cars doesn't work well," he added. "We've had numerous calls from customers who need something for their cars that are 3,200 (or more) pounds; the brakes designed for 2,400-pound cars don't work well." The rotors are too thin and warp or crack because of excessive heat, and the calipers strain to hold on to the rotor.

The SS4+ systems come in two versions, street and drag spec, but little is different between the kits. It's designed for use on the Fox-4 ('94-'04 Mustang) and S197 ('05-present) models. Fox-body cars can utilize the front brakes by upgrading to a newer style spindle from the Fox-4 platform. The rear brakes will bolt on to any vehicle with a specific 9-inch rearend housing end. Using the rear brake system will force the deletion of the emergency brake. The SS4+ Drag Spec doesn't come with hoses, and the rotors aren't pre-assembled like its street-spec brethren. Baer also doesn't pack the Drag Spec hubs with grease, and the calipers come in clear-anodized-other colors are optional. The major hardware difference with the Drag Spec version is that the systems come with 1/2-inch wheel studs (rear brakes) and more aggressive brake pads.

Pricing for the SS4+ Drag Spec lists the front system, without hubs, for $695; with hubs increases the price to $895. Jovanis utilized the kit without hubs. Moving rearward, the single-caliper system goes for $695, while the dual-caliper setup will set you back $995.

Jovanis had to pick up a few other pieces before installing the kit. First on the list were an assortment of Earls brake lines and conversion fittings that total up to $39.88 from most popular mail-order companies. He also bought four Earls Speed Bleeders so he could bleed the brakes by himself, but the thread was incorrect and we didn't use them. Those who can find the proper thread size can count on the speed bleeders adding $15.99 per pair. You will only need one per corner.

The SS4+ systems are designed for SN-95 spindles, and Jovanis picked up a set from MPS Auto Salvage, which he then painted black using VHT paint. That adds $150. Also on the list were ARP wheel studs for the front, made specifically for this application and going for a total of $59.50 (10 at $5.95 each). Jovanis acquired two ball-joint spacers that he found on a message forum for $10 each; they are required when adding the '94-'95 spindles to your Fox-body.

The total cost for the additional parts came in at $249.38. Add that to the $695 for each set of brakes and the full package for this conversion is $1,639.38. You can also count on performing an alignment, which is typically $200 depending on what part of the country you live in.

Elam tells us the S4 calipers are DOT-compliant and feature stainless pistons, which are slightly heavier than most drag-specific brakes, but transfer less heat back to the fluid. The calipers have deeper pistons allowing for better dust seals, which are recessed into the bore and don't come into contact with the back of the pad. "Most, if not all, of the current drag offerings do not have dust shields," says Elam. The deeper piston also prevents cocking of the piston in the bore.

The calipers are built for a specific thickness rotor. This prevents the use of spacers between the caliper halves. Elam concludes the highlight list: "Our rotors are a 1-inch-thick, directional-vane rotor. Directional vanes are far superior to straight vane or solid rotors as they help cool the brake down when rotating. It is also longer, adding more stability to the rotor."

Installation wasn't bad, and it won't be for you if you have experience and the proper tools. It's something that can be tackled in your driveway in one day, save for those who need the axle flange trimmed. We also suggest determining which 9-inch end is on your rearend housing because the Baer system fits only two styles-Torino and Big Ford 1/2-inch T-bolt.

On the front, a word of caution goes out to those with the Fox-body cars-upgrading to the SN-95 spindles will require a trip to the alignment machine as the A-arm is adjusted inward by 6 mm to bring the front wheels back under the fenders. Another front note, those installing the Baer brakes should check the clearance of the wheels. Jovanis' older Weld Pro Stars didn't clear the caliper. Fortunately it didn't matter as he had a new set of wheels for the car, which clear the calipers. It is likely you will need a deep offset (2.25-inch) to make the front wheels fit.

The Baer brake upgrade couldn't have come at a better time as Jovanis is planning on going with a larger intercooler and some other upgrades from B&G Custom Turbo to push his car even deeper into the 8s. In life, you have to slow down to smell the race fuel, and Jovanis will have no problem getting his 3,250-pound missile to stop from 166-plus mph thanks to Baer. 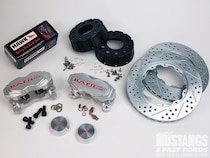 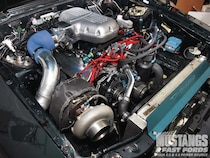 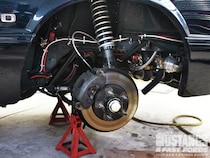 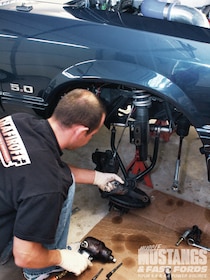 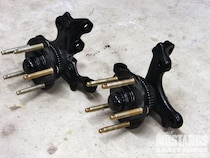 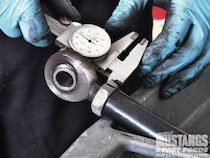 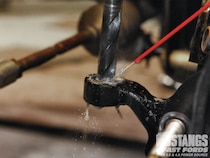 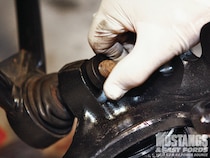 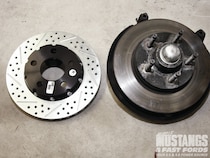 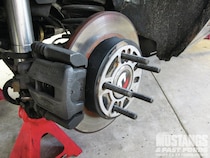 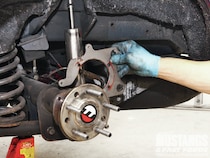 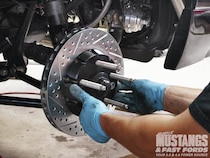 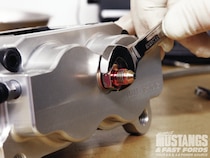 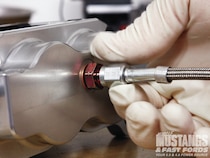 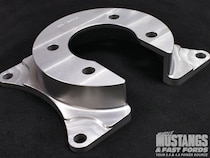 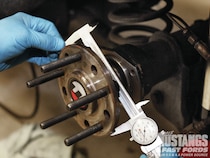 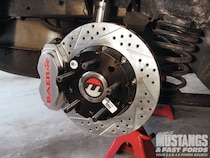 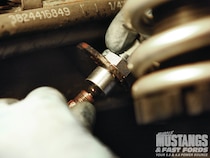 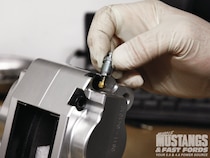 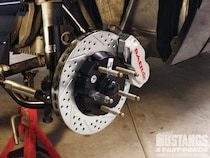