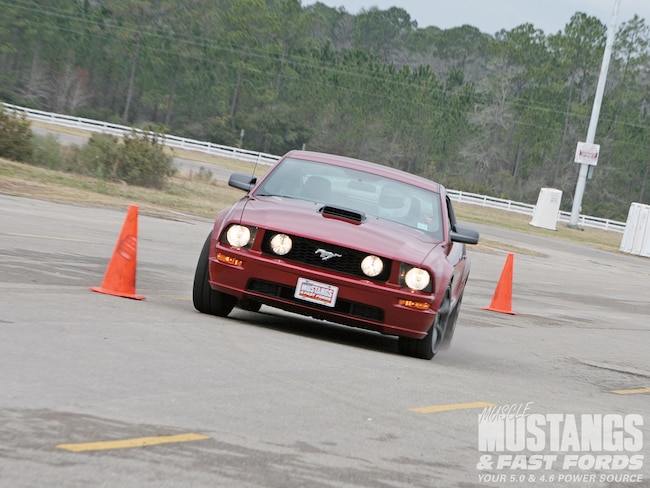 Determining exactly what makes the perfect street car is fairly subjective. A stock '10 V-6 Mustang may be one person's perfect Pony, while a 1,000-rwhp twin-turbo GT500 may still not be enough for someone else. In our opinion, a healthy blend of horsepower, handling, stopping power, and comfort can make for a great car to drive on a daily basis. Although it may not be perfect for everyone, it's a formula that usually works pretty well.

About a year ago, we installed Saleen Speedlab's Super Shaker twin-screw supercharger on our stock '07 GT ("Shake, Rattle, and Boost," Aug. '09, p. 78). The end result was an S197 with near-stock driveability and 432 rwhp/408 rwtq that could rip off mid-11s at will. Mind you, that came with a totally stock exhaust, 5R55s transmission, torque converter, and standard 3.31 gears. As we've taken many Mustangs past the point of no return, we want to maintain the highest quality of driveability on this project-but we want enhanced cornering, braking and looks, too.

Though some would tell us to quit while we're ahead, we think the GT needed something else to push it to that "perfect" point. We found it in Ford Racing's '05-'10 Mustang Handling Pack (PN M-FR3-MGT), GT500 brake upgrade (PN M-2300-S), and a slick wheel and tire combination from Saleen and Nitto. To handle the installation, we headed to Ramsey's Performance in Lutz, Florida.

Our test vehicle is owned by Editor Smith, but it's mostly driven (on a daily basis) by his lovely wife, Diane. Given the fact that we were taking the boss' wife's car apart, there would be big problems if we didn't make big improvements. With my associate editor position on the line, we handed the Pony over to Robert "B" Bugg at Ramsey's Performance to handle the suspension swap.

The FRPP suspension package install is simple and straightforward. Everything in the kit is a direct replacement, so there is no heavy fabrication or changes needed. Bugg started by removing the brakes, making the front suspension components easily accessible. With the calipers, rotors, and dust shield out of the way, the struts were unbolted from the spindles. After removing four bolts on the top of the strut tower, the strut and spring came right out.

The new struts were designed by Multimatic Motorsports and Dynamic Suspension to be a high-performance replacement that will improve the handling characteristics without sacrificing ride quality. The internals of the shocks and struts feature valving, designed to perform well at an open track day as well as on the drive to work (or dance class). The struts are used in conjunction with Ford Racing's lowering springs. The new progressive-rate springs lower the car about an inch, giving it an aggressive look without sacrificing ground clearance or ride quality.

After Bugg reinstalled the new struts and springs up front, the front antiroll bar was next to go. The stock, non-adjustable, 34mm bar was removed; after replacing the factory endlinks, the new bar slid right into place. Ford Racing's antiroll bar is slightly larger at 35mm, but the new bar is constructed using thicker tubing, making it far stiffer than the factory bar. The new antiroll bar also has three mounting point locations for adjustability. This suspension kit also includes a strut-tower brace, but we were unable to use it with the Saleen Super Shaker supercharger. 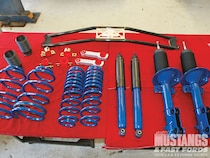 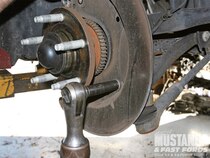 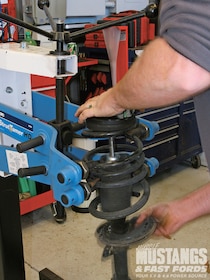 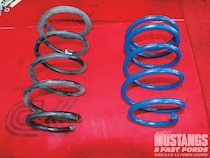 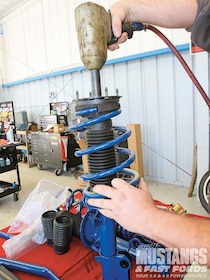 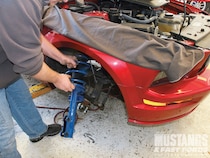 Once the front brakes were complete, Bugg moved to the back of our '07 GT. The rear suspension went together just as easily as the front. The new shocks are designed to match the struts, and the rear springs are also progressive-rate coils. The stock 20mm rear antiroll bar is replaced with a 22mm bar to stiffen the rear, and it attaches with billet endlinks. After buttoning up the rear suspension, Bugg removed the rear calipers and installed the more aggressive brake pads. The stock rubber brake lines were also ditched for the stainless lines in the kit.

Since our lowered suspension gave us a more aggressive stance, we needed the perfect wheel and tire to tie everything together. After searching high and low, we finally found a winner. Saleen's Heritage Edition 19-inch five-spoke wheels give us plenty of room for our new binders and allow us to run a tire with a suitable sidewall for a comfortable ride-not to mention the charcoal-colored wheel looks awesome on our Redfire GT.

Since it rains on a near daily basis in the summer in Florida, we need a tire that performs well in wet and dry conditions. Being that we've had great results on other projects when using them, we opted for Nitto's NT05. We wrapped our new Saleen wheels with 245/40ZR19s up front and 275/35ZR19s in the rear. The combination of the lowered suspension and a slick wheel/tire combo gives this '07 GT the aggressive looks it was missing.

We know our readers crave more than just looks-you want to know how much performance can be gained, so before installing FRPP's Handling Pack, we headed to Gainesville Raceway for some baseline testing. We took the stock-suspension GT around the 300-foot skidpad and through our 420-foot slalom course. The stock suspension and tires limited us, and it showed in the feel and the numbers. On the skidpad, the stock-suspension Pony pulled an average 0.89 lateral g's. On the 420-foot slalom, the car averaged 40.36 mph through the cones. Its tendency on both tracks was to roll a bit and then push. For a stock vehicle, it transitioned well, and with the big power on tap, we could force the rear around but the car wasn't balanced. It was controllable, but there was room for improvement.

After installing the new parts, we returned to Gainesville. In the same tests, the GT pulled 0.95 (average) lateral g's for a difference of 0.06 g's! We then headed to the slalom. After multiple passes through cones, we ended with a new average of 45.67 mph for another huge gain of 5.31 mph. Now the GT was flat and neutrally balanced, turning in quicker and with more accuracy. No longer did the front want to wash out with a push. Carrying over 5 mph, while remaining stable through such sudden changes in direction is truly a testament to how FRPP's Handling Pack improves the balance and compliance of the S197 Mustangs. It's an incredible improvement for a kit that costs around $1,300.