MM&FF Heats Up Nitto's New NT05R Drag Radial Tires And Puts Them To The Test. 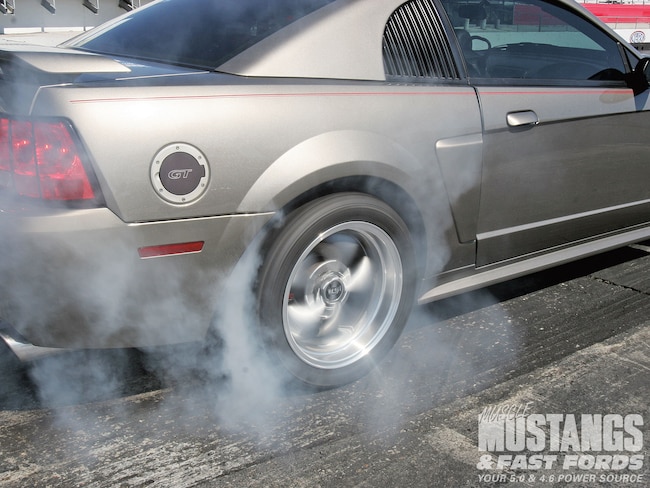 Whether you have 200 hp or 1,200, you need traction to plant that power and get you going. Generally speaking, the more traction you have, the more power you can utilize, which translates into more fun using your right foot. Today, it's become quite easy to make sick horsepower with your late-model Mustang or fast Ford, and thanks to companies like Nitto Tire, you can put it all to the ground and truly enjoy the fruits of your labor.

It's hard to believe, but it's been 12 years since Nitto released its NT555R drag radial to the public, and high-performance automobiles have been using them ever since to accelerate faster. Recently though, Nitto undertook the challenge of constructing a big brother to the NT555R. Early in 2009, the company released a new ultra-high-performance summer tire, the NT05. Using the NT555R and the NT05 as benchmarks from which to start, Nitto designed a brand new drag radial that's geared towards maximizing traction, while maintaining a stable, high-speed ride down track and/or on the street. That tire is the new NT05R, a D.O.T.-compliant drag radial that features specialized race compound rubber and a larger contact patch for maximum traction.

"With the NT555R, we knew it was more street oriented, and decided to come out with something more aggressive," says Nitto technical engineer Alan Ngo. "We wanted to up the performance level and get closer to the other competitors in that segment, and be more comparable to them." Nitto's two main competitors, BFGoodrich and Mickey Thompson, both have products that are known to be stickier and softer than the NT555R, although such attributes come at the expense of durability and streetability, of which the NT555R excels. The new NT05 bridges the gap of streetability with better adhesion, and with that, the softer rubber compound was the major change to the NT05's design versus the NT555R, and offers a zero treadwear rating. As big of a change Nitto made in the compound, the sidewall is considerably important as well.

"There are subtle changes to the sidewall compared to the NT555R, as we had to find a good balance between a soft sidewall that works well at the launch, and a stiff sidewall that provides stability at high speed," says Ngo. Nitto believes it has achieved a very good balance between the compound and the sidewall in the NT05R. Nitto also wanted the NT05R to be legal for use in any drag radial classes, and we think this balance of compound and sidewall will allow them to be used in most sanctions, though we'll have to see what the governing bodies think about it before the 2010 season starts.

"In the future, we'll be rolling out more sizes, most likely the 15-inch sizes for those who run dedicated drag wheels for the track," remarks Ngo.

With that said, Nitto sent us a pair of the NT05R drag radials for a test session, and to make sure we had something that could take advantage of the new rubber, we lined up a relatively high-horsepower Mustang to give them a workout on the quarter-mile.

We met up with Tony Gonyon of TunersInc (Orange Park, Florida), at Gainesville Raceway in Gainesville, Florida, where he had Jim and Nancy Conners' 2002 Mustang GT. Conners' Colt is a former MM&FF feature vehicle (Sept. '08) that sports a fully built Two-Valve 4.6L mill and a Vortech T-trim supercharger. It puts down 550 rwhp on an everyday, pump-gas tune-up and runs very hard.

With our baseline times on record, it was time to bolt up the NT05R drag radials. Nitto sent us a set of 315/35/17s and we called up American Muscle for a set of its deep-dish 17x10.5 Bullitt-style wheels with an anthracite finish. They looked great against the Mustang's Mineral Gray paint, and the 10.5-inch width allowed the 315 to plant squarely on the pavement. It also fit the SN-95 chassis perfectly and without any modifications.

Airing the tires to 15 psi, Gonyon loaded up and headed to the starting line. Getting acquainted with the tires, Gonyon laid down an 11.09 at 123.97 mph (1.62 60-foot time). On the next pass, Gonyon added 5 pounds of air pressure to the tires, but got out of the throttle down track, as the transmission went into overdrive. Feeling that the tires could use a bit more air pressure, we added 5 more psi for a total of 25. The first 60 feet vanished in 1.59 seconds, and the Mustang crossed the stripe in 10.94 seconds at 124.79 mph.

"I was impressed," said Gonyon. "I didn't expect them to perform that well, and I think we could have gone faster-I probably could have gone up more in air pressure, too. The 555Rs are going to be better in the rain and bad weather, but I' rather have the NT05R at the track-most people don't drive cars like these in the wet anyway."

Those that have found the limits of the NT555R will no doubt find the NT05R to be what they need; it should open the eyes of a great many who use other brands as well.