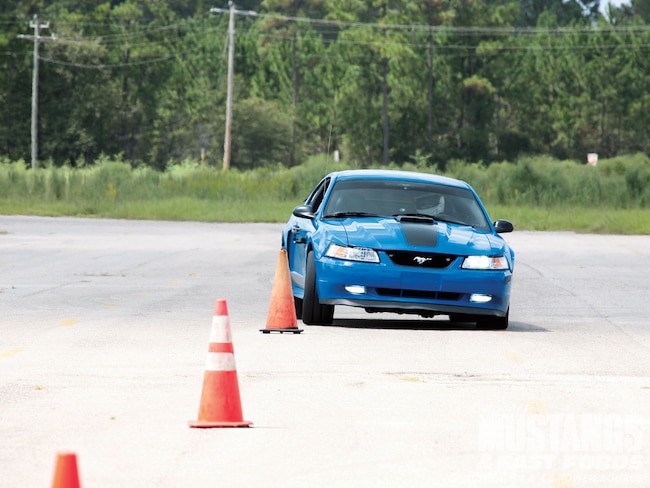 In the first few installments of project Shake 'N Bake, our resident Mach 1, we threw on some basic bolt-ons to free up a few ponies and stiffen the chassis for a solid foundation. Until this point, our testing included time at the dragstrip, an unsuccessful attempt at the autocross, and a lot of street miles. Now it's time to really dig in.

In the coming months, Shake 'N Bake is going to see some major suspension upgrades, as well as a lot of open-track and autocross time. But right now it's time to put the mildly modified suspension through its paces to see how well it performs prior to any future improvements. In the process, we are also going to compare two sets of Nitto tires to see how the new NT05 street tires hold up against the NT01 R-compound hides.

The MM&FF staff headed to Gainesville Raceway in Gainesville, Florida, which played host to our series of handling tests. After logging a fair amount of street time, we decided to ditch the mismatched tires that came with the purchase of the car. Despite the meaty 315/35R17 rear hides and 275/40R17s up front, they lacked greatly in the grip department-these tires are rock hard and don't even have a treadwear rating. 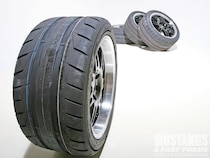 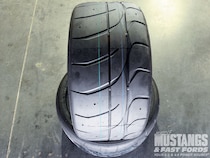 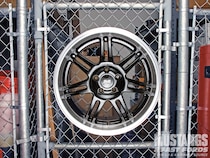 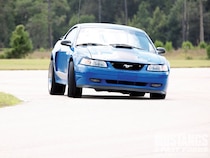 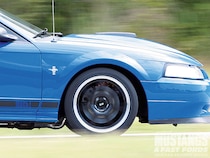 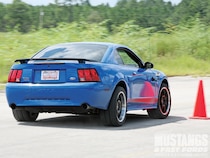 To get an idea of how our Mach 1 handled, we started the tests on the Nitto tires that will now be daily equipment, the NT05s. Latemodel Restoration Supply sentus a set of SVE 10th Anniversary Cobra replica wheels, and we opted for black rims with a machined lip to go with the black accents on our Mach 1. Our new wheels came in at 18x9-inches in the front and 18x10-inches in the rear, and would soon be wrapped in 275/35ZR18 and 295/35ZR18 Nitto NT05 rubber.

"The NT05 is designed for high-performance street applications," explains Alan Ngo, staff engineer for Nitto. "It's a blend of the NT555 and the NT01. The NT05 has two polyester plys that wrap across the tread surface and around the bead to provide extra sidewall stability. One of the layers continues past the bead into the underside of the tread, essentially giving you a third polyester ply."

We previously tested a set on Project Superfly, Destroyer of Hideous Camaros, (July '09) with fantastic results. To get an idea of what the NT05 was all about, we put it up against the NT01. "The NT01 is designed for dry competition use," added Ngo. "It is built with a softer 'R' [race] compound, and a tread design that starts at 6/32-inch and can be shaved to 3/32-inch, essentially leaving a slick with two grooves." The NT01 also sports a greater contact patch-more tire on the ground equals more grip. Although it is DOT-compliant, the NT01 is not designed for daily use.

Skidpad
When we arrived at Gainesville, we headed right for the 300-foot skidpad. We started running clockwise laps (three revolutions at a clip to prevent engine oil from getting away from the pickup) and clocked our times with a stopwatch. After a few rotations, we switched directions and and did the same. As our times were being calculated, we jacked up the Mach 1 and switched to the 275/35 ZR18 NT01s.

Not surprisingly, our Mach came away with some impressive results. Average lateral grip with the NT05s was 0.93g's. That says a lot for Nitto's street tire. We were hoping to see at lease 1.0 g with the NT01s and they didn't disappoint. After our final calculations, we had 1.03g's of lateral grip with the NT01s. If you still need a reference point to see how well these tires performed, those rock-hard hides we got rid of only checked in at 0.79g's. With both sets, even at the limit, the car was predictable, with a slight amount of understeer.

Slalom
The next test for our Mach 1 was the slalom. The 420-foot course had six cones at 70 feet apart, and we started with the NT01s. The idea is to drive through the cones as fast as possible, while maintaining control. This shows the ability of the car to switch back and forth quickly.

After a few warm-up runs, we let the Mach 1 loose. The handling characteristics between the NT01s and NT05s were not incredibly different, but noticeable. The tread and sidewall design of the NT05s give it great rigidity and stability during high-speed cornering-much like the NT01.

Once the numbers were computed, there was a 2-mph difference in average speed between the two sets of tires. The NT05s averaged 42.44 mph through the cones, while the NT01s came away with a 44.28-mph average. As predicted, the 01s had more bite on initial turn-in and more overall grip. The Mach was really tossable and it was easy to maintain overall control. During this maneuver the tires gave great feedback. 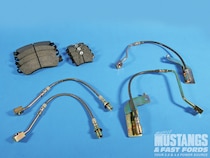 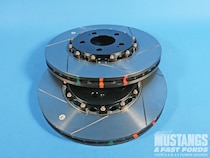 Road Course
The next stop was the road course at Gainesville, which was configured at just over a mile. Though there are no elevation changes, this track is quite technical, with a couple of off-camber turns and some nice switchbacks.

Although we were extremely excited about seeing just what our Mach 1 was capable of doing, this test was short-lived. After just a couple of laps around the circuit, brake fade set in. A combination of scorching heat (it was over 90 degrees ambient) and our well-worn Mach's brakes ended in big-time fade and a short on-track session. We've previously experienced very good braking from stock Mach 1s, but our car is obviously whipped in this department. While most people would look at this as a bad thing (we were upset about not being able to run), this gave us the chance to change some parts and get rid of another weak link.

At The Shop
When we returned to MM&FF command central in Tampa, we made some much-needed improvements. Mach 1s came with the same brake combination as the '94-'04 Cobras. Once we tune them up, the 13-inch front rotors with dual-piston PBR calipers and 11.6-inch rear rotors with single-piston calipers will be capable of handling everything we are going to put them through.

Before we dismantled our Mach 1, we also wanted to augment our track test with an instrumented braking test. With the help of Scott Parker, editor of GM High Tech, we grabbed our Stalker radar equipment and clocked our rate of decel. A series of stops from 60 mph confirmed what we already knew. After only three stops from 60 mph, our stopping distance steadily increased due to fade. Our first shot yielded a distance of 135 feet, followed by 140-foot stop, then 145 on our final attempt. Had we gone on, distances would have been astronomical. In an emergency, that extra 10-15 feet could mean the difference between stopping safely, plowing into another car, or flying off track!

Once our test was complete, we put Shake 'N Bake on the lift and removed the old calipers. From AmericanMuscle.com, we ordered a set of Hawk Performance HP Plus brake pads. These pads are designed for street use along with open-track and autocross racing, making them perfect for our application. AmericanMuscle also sent us J&M's stainless steel Teflon brake hoses. Stainless lines are a great upgrade on any performance braking system. They provide great resistance to ballooning, unlike the stock rubber lines. This helps keep constant fluid pressure to the calipers, not to mention providing improved pedal feel at the limit.

Since we have multiple open track days already planned, along with a few autocross trips, we wanted to get as much performance and life out of our brakes as possible. For this we turned to Kenny Brown Performance for its brake coolers and duct kit. This kit replaces the stock dust shield, and gives a forced flow of cool air directly to the brake rotors. This is oh-so important when looking for maximum brake performance lap after lap.

As we started taking our brakes apart, we found something we weren't thrilled to see-the driver-side front rotor was cracked. We had planned to reuse the slotted and crossdrilled rotors that were on the car, but it was time to make other plans. Disk Brakes Australia (DBA) sent us a combination of its DBA-5000 (front) and DBA-4000 (rear) series rotors, solving of our problems. The DBA-5000 series are two-piece slotted rotors with DBA's Kangaroo Paw vent design. The Kangaroo Paw design is said to dissipate heat faster than straight cooling vanes and will add strength to the rotor, thus preventing ballooning under extreme braking conditions. The BDA-4000 series rotors are a one-piece design, which also utilize the Kangaroo Paw design.

The installation of everything was quick and easy. Once the stock dust shields were removed the installation of the brake coolers was straight forward. The only tricky part was figuring out where to mount the duct inlets.

After finishing up our brake install, we flushed out the old brake fluid in favor of fresh Amsoil DOT 4 fluid. Amsoil Series 600 High Performance DOT 4 brake fluid offers a much higher dry boiling point than the stock fluid, making it ideal for autocross and open-track use. With our brakes bled, we spent a few miles bedding in the pads per the manufacture's specifications before retesting our Mach 1.

With Parker armed with the radar gun, we cranked the Mach 1 back up to 60 mph for a second series of stops. Our first stop gave us a distance of 149 feet. Even though it's further than our previous first stop, the new pads and rotors are designed to handle much higher temperatures and need to heat up a little. Our second stop was a shorter 144 feet, followed by a 142-foot stop. Although our overall stopping distance didn't decrease, we eliminated the fade and are sure the brakes will help us go much quicker on track due to the higher operating temperature of the Hawk brake pads.

Although for the amount of work we did it would have been just as easy to install a big brake kit (and that's not to say we won't in the future), we wanted to extract the most performance we can out of what we already have. Now that the brakes are ready to go, lets get out on track!