Michael Galimi
September 1, 2008
Photos By: Mike Ficacci
Whoa, Nelly! Your author holds on tight as he buries the brake pedal and lets the ABS do all the work.

Last year, I picked up an '07 Mustang GT to serve as a daily driver and a weekend warrior. Immediately, the performance and comfort of the new Stang was quite noticeable over previous generations. Ford did its homework, as virtually every aspect of the car is just right for a reasonably priced modern musclecar. From the 300hp engine to the suspension and interior, the engineers and designers did a great job. But with the good also comes the bad.

As impressed and satisfied as I was with my new Stang, I couldn't help but notice that it suffered from the same problem as every other factory stock Stang-poor braking. While much improved over prior Stangs, the stopping power was inadequate under serious driving conditions. I don't demand a lot from my brakes, since I leave auto-crossing and road racing to other enthusiasts, but with such awesome stopping power available from the aftermarket, I figured there was room for improvement. I expected a bit more bite to help bring this 3,700-pound street missile to a stop in a hurry. 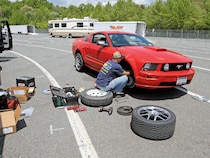 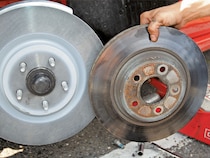 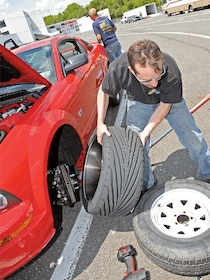 Thankfully, the aftermarket has addressed the situation, and I turned to Ford Racing Performance Parts (FRPP) for an upgrade. Jesse Kershaw of FRPP recommended the company's GT500 brake-upgrade kit (M-2300-S) to help stop the car quicker and add a unique look to it. It's an all-inclusive part number, which means you get Brembo four-piston front calipers, pads, 14-inch rotors, a Goodridge four-piece hose kit, and Shelby pads for the rear brakes. The GT500 brake upgrade fits all '05-present Mustangs, and can be installed in your driveway with common tools.

We must warn you, though, that switching to this brake combination requires a minimum of 18-inch rolling stock. Our test subject had the standard 17-inch Bullitt wheels. On the advice of Justin Burcham of JPC Racing, we selected a set of FRPP Shelby wheels (with black accents). He had cautioned us to be careful when shopping for 18-inch wheels. Apparently, not all wheels fit properly over the massive Brembo setup. The four-piston calipers sit out further than other brake kits, so Shelby-specific wheels should be ordered. FRPP offers three versions of the Shelby wheels: standard finish, standard finish with black accents, and black. 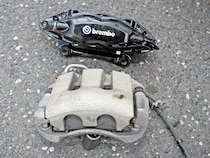 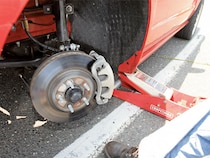 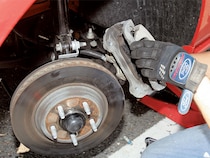 As for tire selection, browsing through our storage room netted us a set of Goodyear F1 GS-D3 tires. Up front, the tires checked in at 265/40-18, while the back was sized at 275/40-18. The wide Goodyear rubber was a vast improvement over the narrow OEM stuff-Pirelli P-Zero Nero 235/55-17 all around. Overall height changed only 0.40 inch when going from the Pirelli tires to the Goodyear F1 GS-D3s. We're not sure if it affected the speedometer; it appears to be reading properly, and we haven't touched the tune. This is important: Since the speedometer is a computer reading, you must update the tune with a drastic tire change.

The F1 GS-D3 tires came out last year and were designed for both wet and dry performance, and to also offer the highest government wet-traction rating with competitive treadwear. One noticeable difference is that the wider tire made the stance narrower on the roadway, and the driver will feel the heavy truck-made grooves a lot more in the steering when on interstate highways. I had a similar experience in the Roush 427R late last year when the MM&FF staff drove that hot rod for a few months. 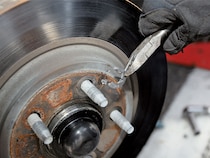 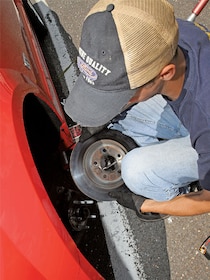 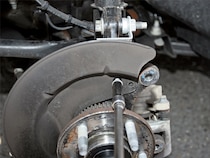 Installation And Testing
The new wheel and tire package was bolted on before we made any baseline braking runs. It wasn't our intention to add the larger wheels and better tires-it just so happened that our company van broke down and it left us no way to get the wheels and tires from the office to the track. We had no choice but to swap them in the parking lot the day before the test. Naturally, a rainstorm came through the area as Rick Jensen (editor of GM High Tech Performance magazine) and myself had just taken the first wheel off the car. We did our best NASCAR pit-crew impression and changed the rims in record time. Despite our speedy swap, we were drenched to the bone and didn't get any pictures because of the monsoon. It was worth the sacrifice, though, since the next day we'd be stretching out at Raceway Park (Englishtown, New Jersey) instead of goofing off in the office.

All MM&FF brake tests are performed using a radar gun (a Stalker ATS, to be exact) that's hooked up to a laptop to log the information. It's a simple process: Get the car up to speed, bury the brake pedal, and let the ABS do all the work. We performed 60-to-0 and 100-to-0 braking situations. Each mph segment was tested consecutively to create an average. The consecutive run is meant to encourage brake fade and push the system to its limits. We didn't just do a 100-mph-to-0 test and use the 60-mph results off of that chart. That technique is not accurate because the car is slowing down and the 60-to-0 results are skewed. The true way to determine it is to cruise at 60 or slightly above and apply full braking force. Then do the same for the 100-mph test.

The stock brakes recorded an average of 142 feet to go from 60 mph to a dead stop. In the 100-mph test, we accomplished zero motion in an average of 380 feet. Brake fade was quite apparent after just two stops, and the brakes were literally smoking when we finished the barrage of tests. Our method to the madness was to make several runs from the 60-to-0 in a row, let the car cool off, and then repeat the process going from 100 to 0. Then we performed a trackside swap in order to do the same day testing.

We let the car cool off before Burcham and Danny Kester of JPC Racing took apart the front brakes to install the GT500 binders. The job isn't terribly difficult, but we realized at the track that the GT500 kit comes with rear brake pads, and someone "borrowed" the necessary tool from Burcham's trailer and never returned it. We settled for a Brembo front-brake conversion and figured we could just throw in the rear pads while the car is on the lift getting torn apart for another tech story.

It took only 47 minutes to remove the OEM brakes, install the GT500 setup, and bleed the system. Burcham drove laps around the Englishtown property with the '07 Stang, while I performed photo duties during the Shelby Shootout (see page 86). We felt comfortable that the pads had been properly cycled and broken in, and it was time to do the "after" test. Our testing technique remained identical: Run it up to the predetermined mph limit, nail the brakes, and let the ABS do its job. Our 60-to-0 average resulted in 129 feet, a vast 13-foot improvement over the stock binders. The 100-to-0 test is where the GT500 stuff really showed its prowess-349 feet average, equaling a 31-foot improvement.

Brake fade barely came into effect when we did multiple braking tests, showing the durability and capabilities of the GT500 braking system in road-racing and auto-crossing situations. They'll survive a lot longer than the puny stock components. The 60-to-0 results are what a majority of our readers will benefit from on their street cars. If you stop (no pun intended) and think about it, 13 feet shorter is a major difference when you're stopping in an emergency situation. We also love the look of a larger brake combo behind the wheel. We might upgrade in the future to lighter two-piece rotors at all four corners that have been cross-drilled and slotted. It's more for style than anything else, but for now the GT500 Brembo brakes are a nice addition to my daily driver for looks and performance.