Improve your Mustang's braking with a Maximum Motorsports upgrade kit.

Vinnie The Hitman
October 1, 2007
Contributers: Vinnie The Hitman
In stock form, our Mustang mustered a stopping distance of 164.92 feet from 60 mph. Aside from getting just two good stops before it faded into oblivion, the brake pedal was so wooden that it could have given us splinters. Notice the amount of dive that this and every '79-'04 Mustang has. This is primarily due to the poor amount of antidive in back that lifts the body off the rear axle when reverse torque is applied to the 8.8 housing. It's the same reason why it will squat when you accelerate.

We all love Fox Mustangs, but let's be honest-the stock brakes are pretty much useless for road-course use or when trying to stop a fast drag car. From 1987 to 1993, Ford equipped all of its Mustang 5.0s with a braking system that was a true compromise and surrendered performance to reduce production costs. With its puny rotor size, sloppy single-piston calipers, and poor braking geometry, it's painfully obvious that the bean counters won out before Job 1 ever rolled off the assembly line.

It makes no sense that with all the go-power the 225-horse 302 churned out (14-second e.t.'s, 147 mph top speed, and so on), that mere 10.84-inch brake rotors and 9-inch drums were deemed adequate to slow things down from breakneck speeds. If you think about it, these "GT" brakes were only a slight improvement on a 10-inch design that was intended to stop an 88hp, 2,700-pound Fairmont. Even scarier is that on certain '79-'81 models, a ridiculously small 9-inch setup was also available from the factory.

For any Fox Mustang, a simple brake upgrade would be a switch to full SN-95 Cobra specs either from a parts car or from Ford Racing Performance Parts under PN M-2300-K. Although it would be the most effective move, it's also the most involved, requiring a spindle and rear axle change to allow the 13.0-inch front and 11.65-inch rotors in back to bolt on. You'd also need to spring for a new set of wheels and tires, as the later cars all rolled on 17-inch-or-larger five-lug rims. If you're like us and can't swing that much money at one sitting, it's best to work with what you have. By improving our existing brakes for substantially less, we'll have more money to spend on speed parts and, as we all know, that's what really matters, isn't it? Although antiquated, your Fox Mustang's braking system can improve drastically with a few choice and affordable mods.

For this Pony, we went with the time-tested and proven Maximum Motorsports brake upgrade kit for '87-'93 Mustang V-8s. It includes brand-name goodies such as Hawk HPS front pads and Maximum Motorsports' own stainless steel brake hoses, caliper guide sleeves, and performance brake shoes for the rear drums. For around $250, it's the most affordable and convenient way to improve upon what must be the weakest component in the Fox Mustang.

The easiest and best way to reduce stop-ping distances and minimize pedal effort while improving brake feel on your Mustang is to install Maximum Motorsports' brake upgrade kit, designed for all '87-'93 V-8 Mustangs. PN BP-1 ($257.04) includes all the essential components to beef up your braking. Its performance-oriented Hawk HPS front pads greatly improve braking performance right off the bat. To help the front calipers stay in proper alignment when squeezing these new pads, the factory rubber caliper sleeves are replaced by a set of solid stainless steel units. For maximum grip (pun intended) in back, Maximum Motorsports offers its own high-performance brake shoes to give the rear of your Mustang a much needed bump in deceleration. Finishing off the kit is a set of stainless steel braided lines to firm up pedal feel and provide a consistent application of hydraulic fluid each time the middle pedal is depressed.

For installation, we relied on our own home shop. With the car on four jackstands, we performed what is essentially a four-wheel brake job, with the biggest chunk of time spent on replacing the rubber brake lines with the new braided steel pieces. Once complete, we put some street miles on the car and, upon Hawk's recommendations, bedded the pads after some mixed street driving (see sidebar). For consistency and repeatability, we tossed a set of fresh Nitto performance tires onto our factory five-spoke "Pony" wheels using NT450s in front and NT555R Drag Radials in back, all measuring 245/50/16.

Before the brakes were upgraded, our Stalker radar-based test equipment recorded an atrocious 164.92-foot stopping distance from 60 mph. Afterward, we were able to achieve an incredible 128.25 feet-a difference of 36.67 feet for an improvement of 22 percent. We don't know about you, but 36 feet is more than two car lengths and can be the difference between avoiding an accident and becoming a statistic or making that corner with some late braking. 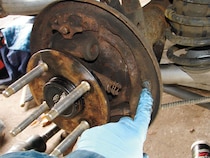 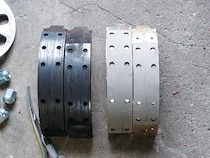 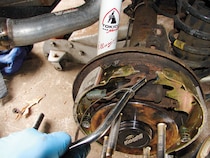 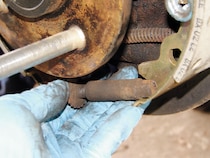 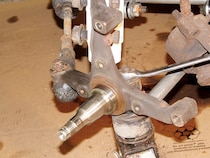 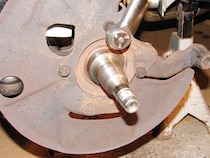 We decided to put on new brake rotors. They're cheap insurance, and with the new extended-length race studs pressed in, they make for an NHRA-legal package.

Follow along as we show you how to pick up some great braking performance for chump change-it's little spent for peace of mind and improved safety.

Afterward, we were able to achieve an incredible 128.25 feetNew BedfellowsThere are many ways to seat brake pads after initial installation. Some mech-anics we spoke to like to ride the brakes for a few miles and then let them cool. Others prefer to just give them hell until they begin to smoke. We decided to follow the instructions that Maximum Motorsports recommends for most high-performance street compounds (as found in these Hawk HPS pads.)

First off, begin with either a freshly resurfaced set of rotors or buy new ones if you want to play it safe. If you're using Hawk pads on a used rotor that was previ-ously fitted with another brand's pad, it's recommended that you sand the surface with 130-grit sandpaper to remove contaminants from the surface.

For the actual break-in, make 6 to 10 moderate stops consecutively from 30 mph without dragging the brakes in between. Then just cruise along and let the brakes cool before you make two or three hard stops from 40 mph. Let the brakes cool as you return home, and you're all set.

For race-compound pads, Maximum Motorsports still suggests that you not mix brands on the same rotor, recommending proper preparation or a rotor change as before. If your competition vehicle is equipped with brake ducts, they should be blocked off for this procedure. With medium pedal effort, slow the car from 70 to 40 mph about six to eight times. Let the car cool by driving around without applying the brakes, and then make six to eight intense stops from 100 to 50 mph. Once cooled, the pads are ready for your next round.