Going on a stopping spree and an astonishing driving experience.

Last month, we launched our buildup series about an S197 Mustang modified right in the middle of the San Diego Auto Show ("Independent Thinker"). The first installment was on the Control Freak front suspension conversion from struts to tubular A-arms. One important item was not covered in detail, however: the brakes.

That's because they deserve special attention all on their own, since they have eight--count 'em, eight--pistons in each front caliper. Offered as an option on the Control Freak package, the Force 10 V8 eight-piston calipers and 14-inch rotors are made by Stainless Steel Brakes Corporation (SSBC).

Why so many pistons? Obviously, increasing the clamping force is desirable, especially when you add a lot of horsepower (in this case, from a Kenne Bell blower, which we'll cover in a later issue). As SSBC President Mike Jonas points out, "With any type of motor work, you end up out-driving the factory front brakes. With our eight-piston calipers, though, you never run out of brakes."

For comparison, Jonas says the stock binders have only a pair of 45mm pistons, while the SSBC calipers have eight 40mm pistons. Not only that, the grooved and plated rotors are 2 inches larger in diameter than the factory units, so this Plus 2 conversion provides a significant gain in clamping surface area.

Together these two aspects increase the net effective clamping force of the brakes for a clenching stop, but there's yet another benefit of extra pistons--increased pad longevity, due to a more even distribution of force on much larger pads. That's not to say the pucks are hard to replace--they're readily available, off-the-shelf Hawk HPS parts.

In addition to operating advantages of these big brakes, there's a visual aspect as well. "They're functional, but also look cool," Jonas says. "They really fill the wheels." Note that these brakes are so large, they require 20-inch rolling stock. 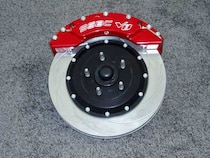 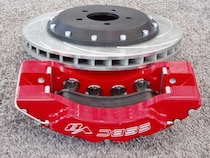 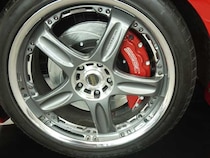 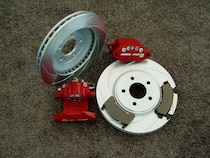 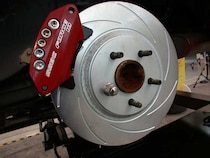 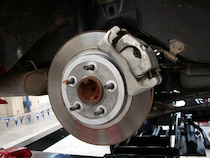 With the combination of the Control Freak IFS and SSBC brakes, the difference in handling in this wild stallion is startling. You can immediately feel the difference. The chassis feels firmer and more solid, thanks to the increased torsional stiffness provided by the tubular cradle.

Also, suspension deflection is reduced by the slightly stiffer spring rates of the coilovers, the firmer shock damping setting, and the change from rubber to urethane bushings.

We ran the car over a variety of surfaces and through the twisties, and it felt like a wholly different vehicle, greatly improved. The more we leaned on it, the more we felt like pushing it harder. This suspension package was designed for both the road and track, and it feels thoroughly capable in either setting.

On the other hand, after a day behind the wheel, there's no question the ride quality is not as cushy. The payoff, however, is in precision, infusing the new Mustang with a surgical approach to carving corners. If you dive into a bend a bit too hot, just make sure you have your seatbelt on because those SSBC brakes haul down this Mustang like a body slam from Hulk Hogan. Repeated stabs at the brake pedal didn't faze these binders a bit.

In an upcoming segment of this buildup series, we'll dig into the install and power output of the Kenne Bell supercharger. In the meantime, suffice it to say that if anybody dares to challenge this Mustang, imagine his surprise when you blow him away in the straights, slice and dice him out of curves, and stop as fast as you can accelerate.

And you'll look good doing it, too, as you'll see when we go over the paint, body mods, and interior upgrades. So stay tuned--there are lots more goodies to come.