We install Griggs' GR40 Sport Brake system on our '97 project GT and go looking for dimes to stop on.

Last Month, the green machine, Project Beginner's Luck, received a much lower outlook on life, with a complete suspension overhaul courtesy of Griggs Racing. Now that it corners better than an exotic European car, I might as well make it stop like one, too.

The only problem was the short deadline I was under to finish the project. We wanted to have the brakes ready for SVTOA's Howling at Buttonwillow event (July '06 issue). The guys at Domestic Performance and Restoration (alias DPR, of San Diego) were accommodating, but moved so quickly through the install, my head was spinning. Thankfully, the brake install is a fairly simple procedure that just about anyone can do with the right tools and some friends to help out.

Unlike previous installs, the car was fairly cooperative with us-no breaking of tools on rusted bolts, no hammering away at sheetmetal to make something fit, and when finished you can actually see the results. Not only do big brakes help you stop better, but there is a certain aesthetic quality about seeing the giant rotor and heavy-duty caliper showing through your wheels.

That said, you better have the right set of wheels, or should I say, the correct offset. I quickly discovered the wheels I had on the car at the time of the install were not going to fit the new brakes. MM&FF had to step-and-fetch-it to find a set of loaner Cobra R wheels from one of our sister magazines, Popular Hot Rodding. Big thanks to Editor Johnny Hunkins. Had he not been a former MM&FF all-star, Beginner's Luck might have run out. Although the wheels looked clean on the car, I had to return them, so when you see different wheels next month, don't be alarmed. Editor Campy donated a set of his own Konig Villians for the cause, and the 17-inch rims fit perfectly.

When we told Bruce Griggs about the plan to do big brakes, we didn't know at the time that he had developed a brake package of his own that is geared more toward a street/on-track application, and is relatively inexpensive compared to some of his competitors. Even being less expensive, the Grigg's GR40 Sport Brake system is tested just as hard for strength and durability as its more race-oriented systems.

One of the ways Griggs saves its customers money is by the choice of pads it uses. All of the Griggs systems use a universal shape designation of 100, 101 and 102. OK, that really doesn't mean much to someone like me, but based on what I read and was told, the size of the pad chosen may cost more than a different pad used by a different company. But the size and compound of the pads allow them to be used longer than other companies, therefore saving you money in the long run.

Griggs says he chose the universal shapes due to the fact that all brake compounds can be found in those shapes. He also says to "compare prices with comparable systems from the other makers. This system offers more braking performance, more durability, better modulation and release for the investment than anything out there." Although I can't substantiate the viability of these claims over the long term yet, I plan on running some tests and will report back on a future date with concrete numbers.

What this system also offers is the first four-piston four-wheel brake system that is ABS compatible, but without the typical controller confusion of high fluid displacement often created by large calipers. In short, it's a truly useable, antilock, big-brake system, which is a huge asset on the street and on the track. The system also comes with the option of an emergency/parking brake. I didn't choose this application because of the automatic transmission, but if you decide to go with the e-brake, keep in mind that you will also need shorter rear axles to accommodate the setup, which isn't much of a thought since you will be removing the axles anyway when removing the rear bracket and dust shield.

Once all the equipment was on the car, I wanted to test it against my baseline braking test. Unfortunately, I had a track event to attend. Real-world application beats out test situations any day of the week. So the DPR crew and I trekked off to Buttonwillow Raceway and put the car through its paces. The suspension handled great, and the brakes stopped remarkably well. There was a reasonable amount of squeak from the pads provided, and Bruce Griggs said I could use a less aggressive pad that wouldn't squeak as much. But considering the time I'll be spending on the track, the squeaking isn't that bad; it just makes for loud burnouts, apparently. 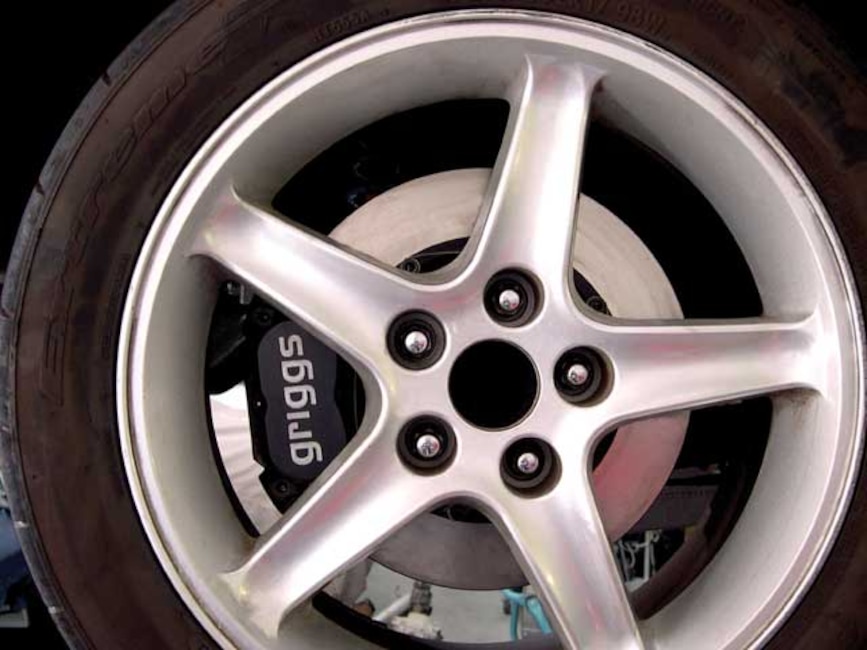 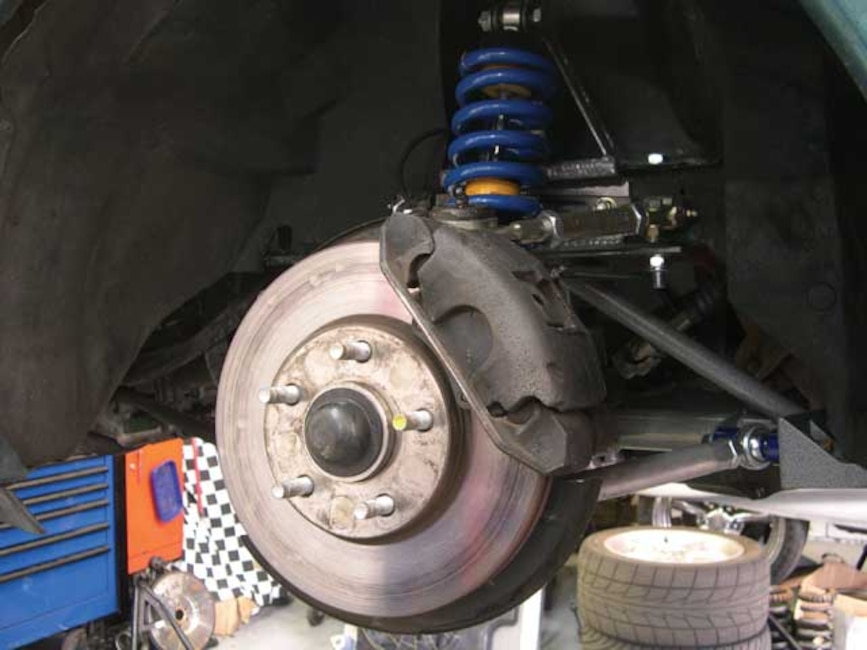 The stock brakes were looking OK, but couldn't nearly handle the stress of hard-core track driving, especially in a car with an automatic transmission. Time for them to go. 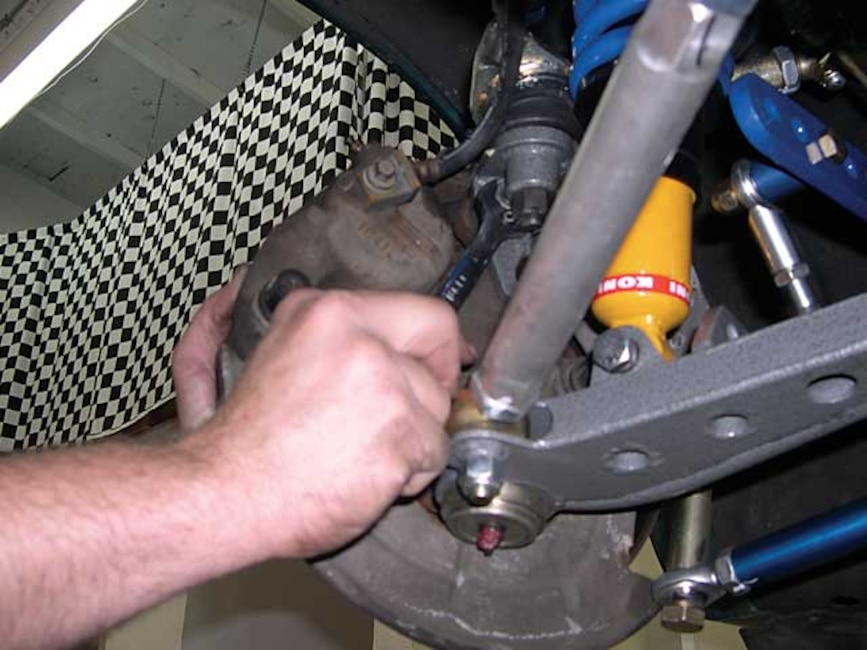 Removing the front brakes is fairly straightforward; first the calipers, then the rotors, and you're almost done. 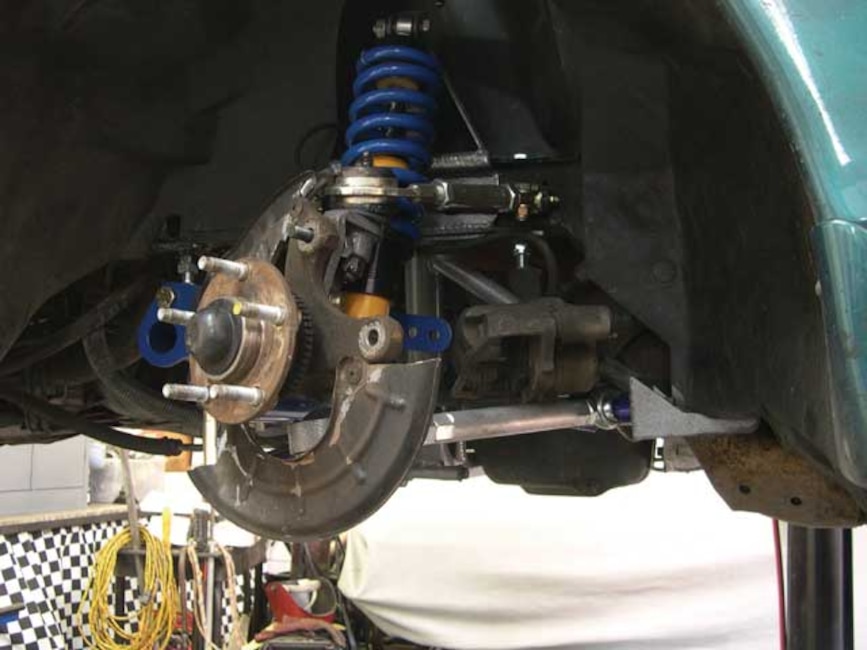 The brakes are removed. We're keeping the stock spindles, but the stock mounting bracket needs to be removed as well as the dust shield. 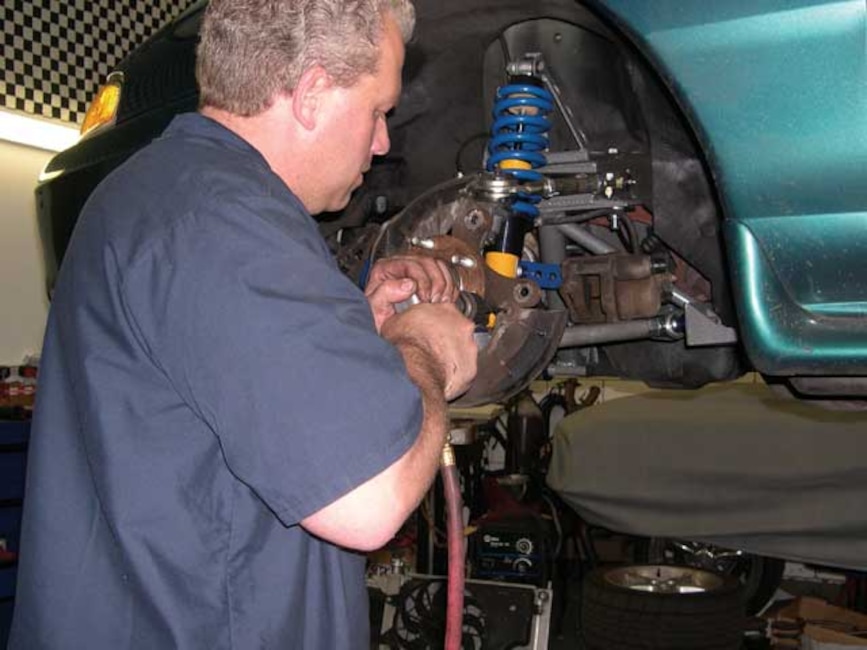 Greg Smith from DPR drills out the rivets to remove the stock caliper bracket and dust shield. 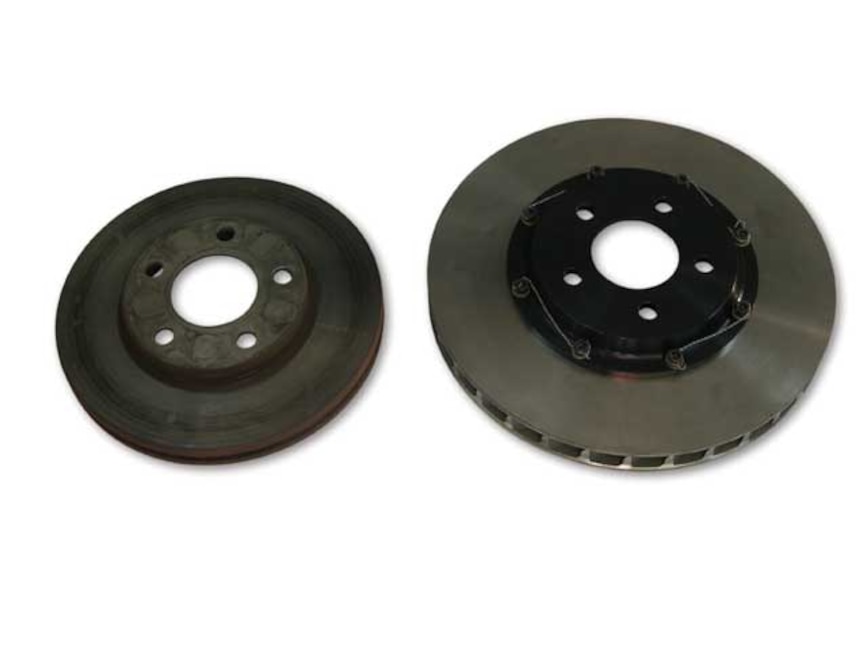 This comparison alone shows why we're making this upgrade. Not only are the new front rotors 0.5 inch thicker than stock and vented for better cooling, but they're also nearly 3 inches larger in diameter, at 13.5 inches total. Bigger rotors provide a larger surface for the brake pads to stick to for better stopping power. 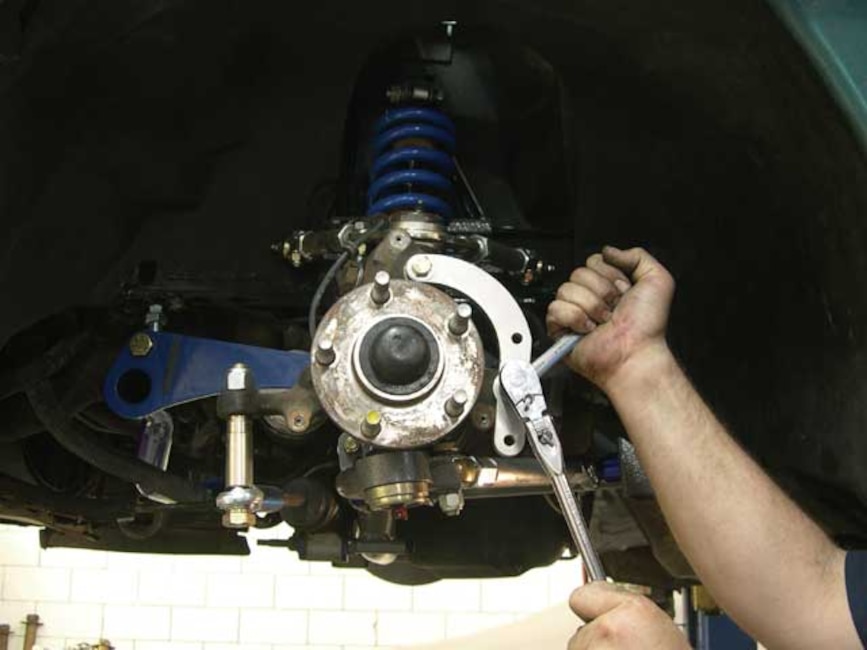 The new caliper bracket is installed.