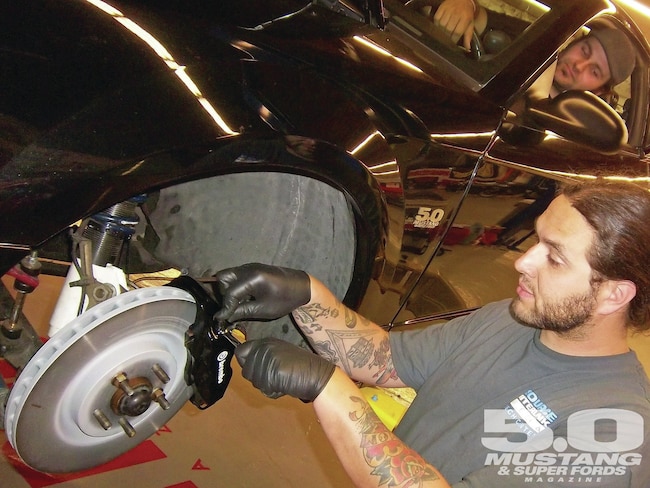 Our supercharged (ProCharger F-1C) '02 Mustang GT has served as our primary vehicle for evaluating New Edge ('99-'04) newness since 2006. Its performance evolved from stone-stock to absolutely wicked (650 rwhp) for a fully loaded, regularly driven street 'Stang.

With that said, it's no secret that late-model Mustang drivetrain performance captures the lion's share of our tech coverage. And, based on your feedback, our studies on parts and systems that make Ponies run harder is appreciated.

We do realize, however, there are other upgradable segments of our favorite ride that also deserve our attention. We try and tailor coverage of these areas accordingly-especially when something new drops. Improving a 'Stang's overall handling prowess is one of those non-power segments that we visit from time to time. Braking probably is that segment's most-important subset. This is especially true when your pony is loaded to the saddle with power parts.

Making phenomenal horsepower is great. However, getting a powerful Mustang slowed down and stopped is a whole 'nother side of the equation-an important side, especially if you drive your 'Stang competitively on road-race or autocross courses, or at the dragstrip. On our in-house '02, tests associated with handling's primary sector-suspension-have ranged from installing street/road-race, and, of course, street/strip components, and reporting on how the parts perform in each environment.

Research on brake systems also has been done on the GT, the last brake project being a move from a Bullitt/Cobra-type setup to a system featuring higher-performance, six-piston calipers for improved stopping during our high-speed hi-jinx at the Mojave Mile (1994-2004 Mustang Performance, Fall '11, "The Mojave Experiment," p. 26).

This brake-centric review focuses on a really cool stopper package from the engineers at Venom Technologies. They are the same crew that created the Shelby GT500 brake-conversion hardware that Associate Editor Mike Johnson installed on his Coyote-powered, SN-95 Cobra ("Fresh Fangs," 5.0&SF, May '09, p. 52). Venom's setup, code-named F14 for its radically large 14-inch rotors, fits all '94-'04 Mustangs (and Foxes fitted with SN-95 front spindles, rear axles, and brake-adaptor brackets) and initially was released as a front-only brake system. However, the company's new rear brakes are the latest attraction.

The F14 rear hotness directly replaces OEM or Cobra-style brake equipment on SN-95 and New Edge ponies, bringing much-needed disc size that optimizes brake-torque balance and pedal feel. Of course, they also match the Venom fronts for a clean, balanced look. Stopping our fast 'Stang is of utmost importance. However, that look is also critical for our '02 project car, as it recently was treated to a wholesale appearance makeover that included adding a set of American Muscle.com's 18-inch '10 Shelby GT500 replica wheels.

From a visual standpoint, the sight of our 12-inch rear rotors peeking from behind the spokes of the Shelby 18s didn't cut it-especially with 13-inch rotors up front. So, we're upgrading with Venom Tech's 14-inch pieces in front and out back, for must-have stopping power of course, and to put a finishing touch on the car's killer new look.

In addition to the kit's affordable price ($1,555 front; $745 rear), installation doesn't require any elaborate fab work other than a bit of grinding on the OEM front spindle and rear-caliper brackets for proper fitment of Venom's caliper-mounting hardware. Unlike a few similar upgrades, installing the F14s does not require a master cylinder change, nor is a proportioning valve necessary. All in all, the job can be handled in the driveway or home garage, provided a jack and jackstands are available, along with the necessary hand and air tools.

Horse Sense: Social media certainly has taken off, hasn't it? We're amazed by the near-instant responses (Comments and Likes) that our postings on Facebook receive, and hope you're enjoying the real-time look at some of the things we're working on. You likely got a preview of these brakes there. In addition to our Facebook page, you can also follow us on Twitter @FiveOhMag.

Our brake testing was done in one of the massive parking lots at Auto Club Speedway/Dragway in Fontana, California. Since we hadn't performed "before" tests with the 13-inch (front)/11.65-inch (rear) brake system we removed, we're comparing our Venom results against data that was collected a few years ago, when our project 'Stang was first outfitted with a Bullitt/Cobra-style brake package.

Back then, with a test speed of 60 mph, our Pony came to a complete stop in smooth, consistent 120-122 feet distances (down from 132 feet with stock hardware). With Venom Technologies' F14 equipment, we knew there would be improvement over the brakes that we just swapped, but when you compare against Cobra gear-which is typically what most enthusiasts step up to over factory brakes-the difference is gargantuan.

From 60 mph, Venom's 14-inch binders halted our 'Stang in 113.5, 113.75 and 113.25 feet on consecutive runs (with 15 minutes cool-down time between runs). Impressed with these statistics, we decided to up the ante a bit and try the brakes at 80 mph, as that speed reflects the type of action they could see in road-race competition.

With 80-mph speed, out test Mustang came to a stop in 166.0, 166.75, and 166.0 distances. The comparative marker that we have at this speed is the '08 Shelby GT500 that represented 5.0 Mustang & Super Fords in the '10 Castrol-Syntec Top Car Challenge. Carlos Cortez's Shelby stopped in 171 feet. Of course, we have to credit some of this difference to the '02's lighter weight, but we're pleased with the stopping improvement our '02 has experienced through this upgrade. 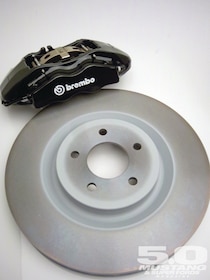 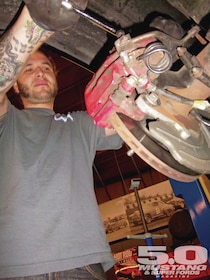 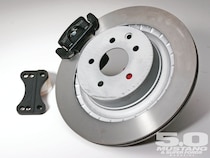 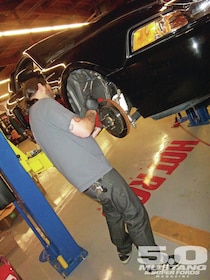 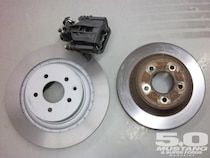 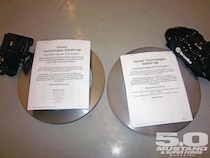 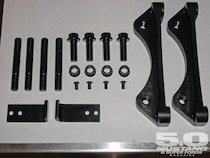 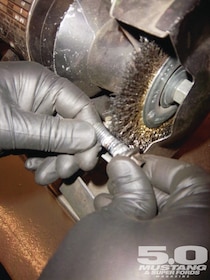 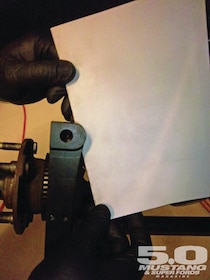 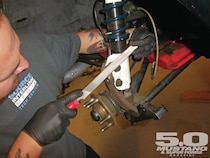 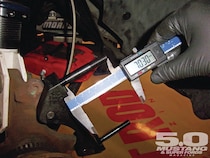 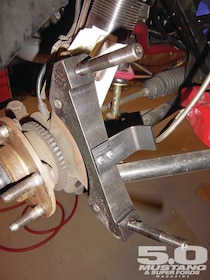 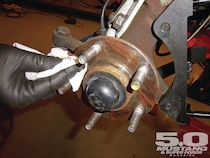 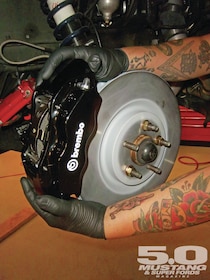 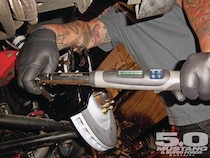 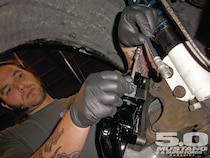 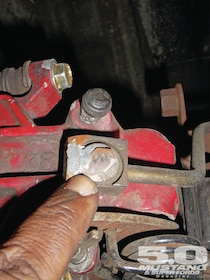 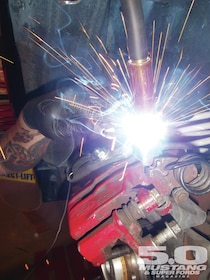 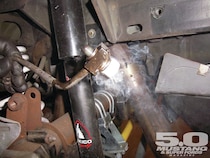 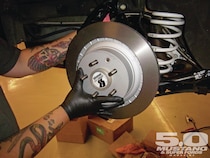 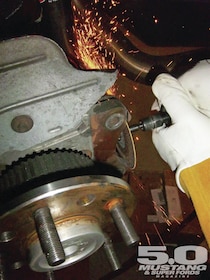 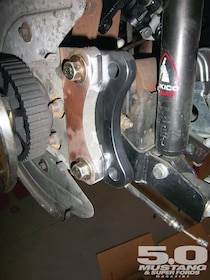 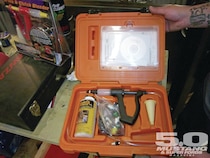 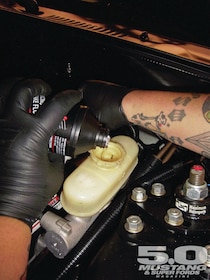 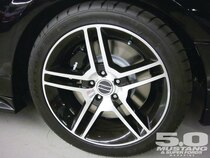 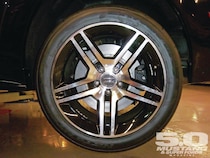