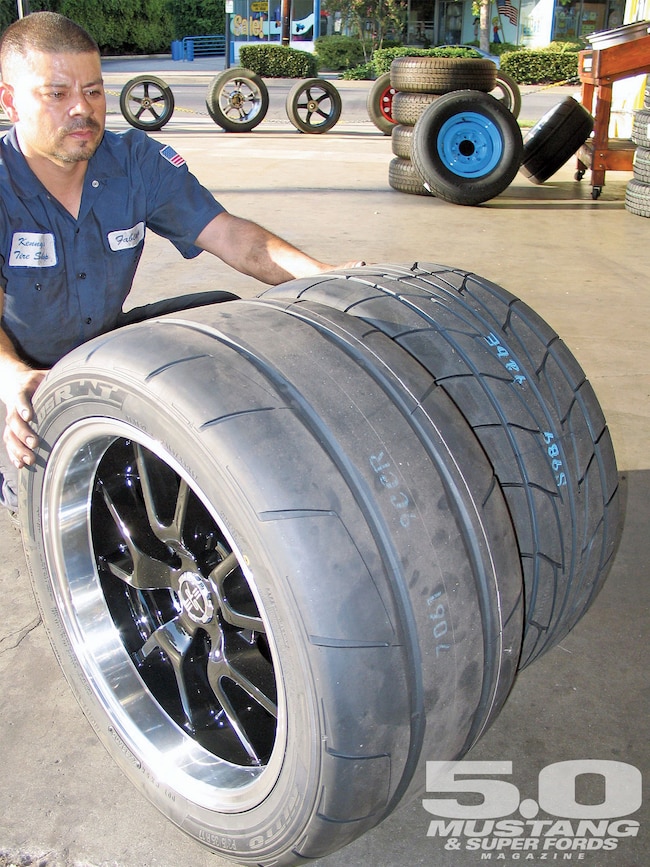 It's hard to believe it's been two decades since Dwayne "Big Daddy" Gutridge first showed us that Mustangs rule the strip on DOT-approved radial tires. Yes, 1989 was the year that drag radials made their way onto the street/strip scene. Twenty years later, radials are widely recognized as the tires of choice for hard-hitting Ponies that put in work on the boulevards and the 1,320.

Initially, only one tire company manufactured drag-radial tires. While that rubber was street legal, the radials were employed at drag-racing events more often than on the street. (Did you know that the first official "class" for drag radials was called Heads Up Radial, and events were held at Raceway Park in Englishtown, New Jersey?)

One of the things we dig about this Mustang game is that the quest for big steam seems to be a never-ending endeavor for most of us. Enthusiasts throughout the 'Stang Nation are always experimenting with methods of improving performance; aftermarket companies, in turn, are always working on methods of improving their wares. When one manufacturer raises the bar by improving a particular part or component, its competitors usually follow in short order as nobody in this game ever wants to be outdone.

Nitto Tire jumped into the drag-radial fray several years ago with the introduction of the NT555R Extreme Drag Radial. The Triple 5R gained a loyal following among 'Stangbangers who needed more traction from their high-horse street Stallions. This loyalty is largely due to the 555R's best-of-both-worlds characteristics: excellent treadwear on the street and grip on the strip. Of course, balancing traction and treadwear leaves some traction on the table.

As drag radials go, the NT555R proved to be perfect for dual-duty Ponies that have as much as 500 hp at the feet. The addition of drag-radial classes in many of the heads-up racing sanctions, and the big-horsepower cars in those classes, brought about a need for Nitto to add a new street-legal DR to its already-extensive lineup of tires for Mustangs-one that is capable of handling more rear-wheel horses. That led Nitto to develop a stickier drag-radial targeted specifically at competition events.

We had our first look at NT05 technology in 2008 when your tech editor visited Nitto's Itami Technical Center in Japan. At that time, the non-drag-radial NT05 street tire was in its final stages of testing, and based on the close-to-final version that KJ viewed, it was clear that a street tire with road-race-tire attitude would soon be with us. It only made sense that a drag radial would follow.

So, with that said, we welcome the all-new NT05R drag radial! Also in the works since 2008, the NT05R is the newest drag radial on the Mustang scene. It's the result of Nitto's extensive research, development, and testing efforts to produce a DR that is built to hook big steam on the street, and especially on the quarter-mile.

"Our top priority during the development of the tire was to maximize traction," says Nitto's Stephen Leu. "To achieve this, engineers developed an all-new specialized race compound and a large contact patch for the NT05R, and enhanced its sidewall." The new drag radial's sidewall enhancement (a bit more sidewall, and much stiffer than sidewalls of NT555R and NT05 street tire) is dual purpose, for traction during launch as well as straight-line stability at the top-end. "The dual-purpose of the NT05R's sidewall helps improve consistency and controllability throughout an entire pass," says Stephen.

After receiving a set of the new boots, our plan was to give them a try at the Pacific Street Car Association's Spring Break Super Show event at Auto Club Dragway in Fontana, California. A and A Tires & Wheels of Reseda, California, mounted 315/35R-17 NT555Rs and the same-size NT05Rs on two pairs of American Muscle's replica FR500 wheels, and we set out to make some laps with Jerome Citrolo's 475hp, nitrous-injected '03 Mach 1 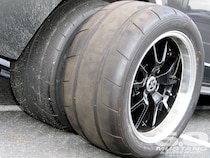 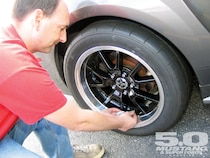 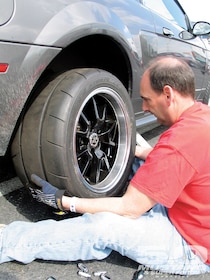 From a street perspective, the new DRs definitely are as good at holding the road as their street siblings. We put extensive mileage on the tires in normal street-driving, freeway, and desolate-area/full-blast conditions. They performed well-the only thing we'd be a little reserved about is driving on the NT05R drag radials beyond 5,000 miles (the new tires have a 0 treadware rating) and in extremely wet conditions.

The NT05R's soft compound really is not conducive to the same type of regular operation as the street version, so the tires may be more "limited-use" for budget-conscious enthusiasts than those with deeper pockets. Pricing for the NT05Rs is said to be comparable to the cost of Triple 5s.

Comparative photos of the NT555R, NT05, and new NT05R Nitto tires are next, along with our critical 60-foot and 330-foot dragstrip data for the company's original drag radial and its long-anticipated NT05R DRs.

On The Dragstrip
While we acknowledge the object of a drag race is to cover the quarter-mile as quickly as possible, the primary focus of this test is to evaluate the type of traction that Nitto's first-generation and latest drag-radial tires promote in the first 60 feet and 330 feet of the track.

"How does it hook?" is a drag racer's biggest question whenever a new racing tire is introduced. To find out just how well the Nittos hook, we called on Jerome Citrolo of Simi Valley, California, and his '03 Mach 1. Jerome's daily driven Mach is impressively modded with a stout DOHC bullet that features Ford Racing Performance Parts' aluminum big-bore block, a Mach 1 crank, Manley rods, Diamond pistons (10.2:1), '03 heads worked by Boss330 Racing, custom cams designed by Modular Performance, and a trick Nazty Performance short-runner intake manifold.

The combination is good for putting 475 hp to the feet, and Jerome is borderline obsessive about taking his Pony to the dragstrip whenever possible, attempting to achieve new personal-best e.t. and mph results at every outing. One of the good things about using Jerome for this particular exercise is his consistency as a driver. He knows his car and has extensive experience driving it on drag radials.

Size Matters
With late-model, hard-core street/strip 'Stangs being its target, Nitto will be rolling out its newest drag radial in 17- to 20-inch diameters throughout 2010, and included in the size lineup is a P345/30R19-the world's first 19-inch drag radial!