Michael Johnson Technical Editor
May 1, 2009
With the Vintage Venom GT500 front brake conversion, the GT500's 14-inch rotors make our Cobra's factory rear discs look like a Pizza Hut personal pan pizza, even though they're 11.65 inches. My Cobra featured American Muscle's 18 S-style wheels before this swap, but I had to choose new wheels thanks to the different offset from the brake conversion. Vintage Venom specifies a 45mm offset wheel, but when I went looking for wheels, my choices were limited. It was difficult to find a wheel I liked in the needed offset. Vintage Venom's own project car utilizes factory '07-'08 GT500 wheels, but I'm not a big fan of that design. I landed right back at American Muscle and its GT4 wheels. The wheels are an 18x9 Hypercoated design to offer a nice contrast to my white Cobra. American Muscle says an 18x10 GT4 will be available soon, and you better believe my car will have a pair on the back when those are let loose.

Horse Sense: Vintage Venom helps make your wheel shopping easier on its website with a special page featuring wheel designs and offsets aimed at simplifying your wheel selection. A variety of manufacturers are listed to make picking a wheel that much easier.

With the introduction of the '93 Cobra R, we saw a glimmer of hope for our Mustang's braking future-the front brakes featured 13-inch rotors and PBR calipers. Likewise, the rear brake set-up was a disc system, as well. Not since the Mustang SVO had our favorite Pony car had four-wheel disc brakes. Things were looking up.

With the SN-95 Mustang's introduction a year later, every Mustang had four-wheel disc brakes. However, the Mustang Cobra featured the better braking thanks to the same package found on the '93 Cobra R. Cobra brakes have reached legendary status in the Mustang community, and that same basic system stayed in use up through the '04 Cobras, save for the '00 Cobra R, which featured a Brembo front disc brake arrangement with 14-inch rotors.

The latter R-model previewed things to come, as the '07 Shelby GT500 also debuted with a Brembo four-piston caliper setup and 14-inch rotors. If the Brembo setup can make the 4,000-pound Shelby stop on a dime, just think what it could do with a Fox or SN-95 Mustang.

Part of this conversion entails new wheels since Vintage Venom uses a spacer to provide room for the front calipers. However, Vintage Venom gives you the specs to help you chose a wheel.

Finding a wheel design was difficult thanks to my picky nature; finding a competent shop to perform this swap was easy. I hauled my Cobra over to Real Street Performance in Winter Park, Florida. Jay Meagher and crew made the conversion look easy, and I was in and out in a day, which is hard to believe for any tech article.

Check out the photos and captions to see how I made out.

One thing I've found since installing these brakes is that they produce a lot of brake dust. Regular cleaning is a must, which I don't like, but I do like (a lot) the brake response, which is instantaneous. Scrubbing off speed is effortless. Only the slightest pedal acknowledgement is necessary to slow down my Cobra. I've seen tighter brake and wheel packages, but this one didn't have to self-clearance in order to work. The only drawback to this system is that I find myself tailgating even worse than before since I know I can out-brake the majority of cars on the road thanks to my cat-like reflexes. (Um, OK.-Ed) 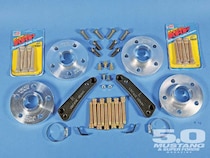 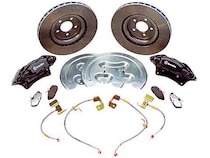 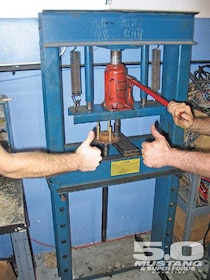 Vintage Venom's GT500 front-brake conversion kit includes all the hardware, adapter brackets, and spacers needed to install Shelby GT500 brakes on an SN-95. The adapter brackets are made from moly steel and are black zinc-coated. The front rotor adapters and rear wheel spacers are made from aircraft-grade 6061-T6 billet aluminum, while the kit's wheel studs came straight from ARP. The kits sell for $395 plus $25 shipping and handling.

Here's why we're going through all this trouble. This is Ford Racing Performance Parts' 14-inch brake upgrade kit, part number M-2300-S. This system is also the factory braking system found on '07-'08 Mustang Shelby GT500s. The system's highlights are its massive rotors and Brembo four-piston calipers. The system also includes Goodridge brake hoses. If this system can provide world-class braking power to the almost 2-ton Shelby GT500, just think what it will do for my SN-95 Cobra.

Jay and his Real Street Performance cronies give the thumbs-up once the new Vintage Venom-supplied ARP studs are safely pressed in place. An important part of this step, the ABS exciter rings must be removed so the studs can be pressed into place. If original, these rings are brittle and prone to cracking when you try to remove them. It's a good idea to get new exciter rings, but you must still be careful when installing them.

Cool BrakingNot only does my Cobra brake better than ever, Vintage Venom also reports this system's operating temperature is much lower than that of an SN-95 brake system. Using its own '04 Mustang Mach 1 test car, the company realized a 400-degree difference up front and 145-degree difference out back. Remember, the rear brakes remain stock, so not only are the front brakes doing a lot of the work, but they're also remaining cooler than stock. These results were reported after running the same number of laps at Waterford Hills outside of Detroit, Michigan. Waterford Hills is a tight little race course, one that puts brake systems to the test. I would love to race my Cobra around Waterford Hills, but the brakes aren't the only parts slowing it down.

Steered StraightWhen planning this brake install, I knew my Cobra was in desperate need of a new rack and pinion. My car has a lot of miles on it, and the inner tie rods had begun to show their age. The driverside inner tie rod was about to come out, so it was a good time to replace the whole rack. Gene Evans Ford's Joe Charles came to the rescue with a new rack in time for the install. Now my car steers like it's brand new, and I don't have any noise coming from the front end.

If your Mustang has a ton of miles on it, chances are it could benefit from a new rack.

Starting off with simplicity, the install involves adding a spacer and longer studs to the rear axles to make sure the offset from front to rear is the same. For that, the rearend fluid must be drained and the differential cover removed to access the C-clips holding the rear axles in place. Remove the C-clips and take out the axles. If you don't have new outer axle seals to go in the housing, be careful not to damage the existing seals.

Next attention turns to the front brakes. The Cobra's factory calipers, brake hoses, rotors, and hubs all must come off before installing the Vintage Venom/FRPP GT500 brake package. The factory torque spec on the hubs is 258 lb-ft, so two bowls of Wheaties may be in order before removing them. Vintage Venom recommends removing the factory dust shields if track outings are planned, but since my Cobra is a street car, we left them in place.

With the factory parts removed, the brake conversion kit can be installed. The only reinstalled parts are the hubs. However, the factory wheel studs must be removed and the hub face must be cleaned with a non-abrasive wheel before installing the supplied ARP studs and torquing them to 258 lb-ft.

With the ARP studs in place and the exciter rings reinstalled, Jay slides the axles back in. Here you can see the Vintage Venom-supplied spacer, which is necessary to keep the wheels offsets the same front to rear. After reinstalling the rear axles and spacers, all that's left out back is bolting on the new wheels.

With the hub installed, the spacer follows. Before adding the spacer, Vintage Venom recommends applying a thin layer of antiseize to the inner diameter and hub-mounting face to prevent galvanic corrosion. After the spacer is added, the FRPP rotor and caliper can be installed.

Using the provided Vintage Venom-supplied caliper brackets, which are side-specific, the Brembo calipers are bolted in place. The caliper bolts are treated with thread-locking compound and torqued to 80 lb-ft.

I agonized for weeks over wheel choices. I was stuck between a rock and a hard place since I didn't want anything larger than an 18-inch wheel, but most GT500 wheel options are 20s. Plus, with the new wheel offset, I needed a 45mm offset wheel to clear the brakes. Thankfully, Vintage Venom, American Muscle, and I came together and found American Muscle's 18x9 GT4 wheel would fit perfectly. My Cobra runs the 18x9s all the way around right now with Sumitomo treads, but an 18x10 GT4 will be ready soon, and a pair of them will be out back as soon as they're available.

The included Goodridge brake line brackets require modificaiton before installation. The frame bracket needs to be cut and reconfigured in order to work in our application, but it's a relatively easy cut-and-weld procedure. Another bracket holds the brake line close to the strut and away from the wheel and tire. With the brake lines all tightened up, Jay bled the brakes to finish the job.