We Thought GT 500 Brakes Would Be Fitting For The Fox 500 Project. We Hope We're Right!

Dale Amy
June 1, 2008
Are we being greedy or overly optimistic by trying to shoehorn a Shelby GT 500's massive front 14-inch rotors and four-piston calipers onto our Fox 500 project? Maybe both, but we did it just the same. Stay tuned-we'll keep you posted on how it all worked out.

Horse Sense: Instead of an engine's vacuum, a hydraboost brake system uses the power-steering pump to hydraulically minimize braking effort. These systems don't require a large vacuum reservoir, thus they take up a lot less space in the engine compartment.

As regular readers know, our latest build project is called the Fox 500, due to the fact that Editor Turner's personal '88 T-top hatchback is going to resemble some sort of SciFi Channel close encounter of a Fox platform and Shelby GT 500 running gear, once the talented and innovative crew at Paul's High Performance do all the hard work. So in keeping with this whole Fox 500 scheme, it makes sense to try and employ as much GT 500 supporting hardware as possible, right?

When new, Fox-body 5.0s suffered from infamously inadequate braking. With increased nose weight and roughly 500 ponies (to start with) coming onboard our blown 5.4-liter LX project, the guys at PHP accepted the challenge of trying to harness the enormous whoa-power of the Shelby's manhole-cover-size front brakes (available now through Ford Racing Performance Parts as PN M-2300-S). This idea wasn't without its tribulations, however, the most obvious being that no one at FoMoCo even remotely considered the idea of anything approaching 14-inch-diameter rotors when engineering the trusty old Fox. Think about it: These rotors are the same diameter as some wheels available on early Foxes.

Of course, our LX also needed some rear disc brakes for its shortened Strange 8.8-inch axle, along with a complete conversion to five-lug hubcaps, so we again turned to FRPP for its M-2300-K Cobra disc brake conversion kit. It encompassed everything we needed for braking out back and way more, including the essential SN-95 front spindles and an adjustable proportioning valve.

In order to squeeze the GT 500's broad-shouldered 5.4-liter into the Fox engine room, we also needed to switch to a compact hydraulic brake booster in place of the bulky factory vacuum booster, at least if there was to be any hope of retaining power brakes-something highly recommended in what we expect will become a regularly driven missile of a street car. Luckily, Hydratech Braking Systems had just what we needed: a bolt-in setup similar to that used on factory modular-motor SN-95 'Stangs.

So, before we run out of space, here's a quick look at the Fox 500's bodacious braking hardware. Now we just have to find rims-and maybe fenders-that will work with those gargantuan Shelby front binders. 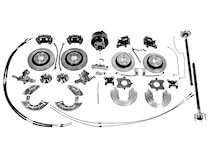 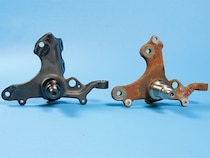 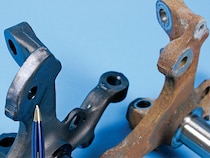 This simple-looking contraption is a handy tool for directly measuring available rim and tire space under your project.

We originally hoped to use FRPP's factory Shelby rims (PN M-1007-S1895) on the Fox 500, but due to the shortened rear axle and extreme outboard positioning of the beefy GT 500 calipers, it became obvious we'd have to go to plan B and order a custom set of wheels. In terms of backspacing, we also have to be wary of the relatively outboard positioning of the front and rear coilovers.

Along the way, we found a useful gadget to get a handle on appropriate rim dimensions and backspacing/offset, along with some idea of front and rear tire sizing. With the Wheel-Rite Wheel and Tire Simulator by Percy's High Performance, we determined that our Fox 500 can use plenty of negative offset-a deep-dish rim-out back but requires some serious positive offset up front, more like that of a front-drive car. Stay tuned for more on the wheel saga.

The vertical adjustment sets the desired rim diameter, while the horizontal "T" is separately adjustable for rim width and backspacing. The wire on top is bent to shape over a desired tire profile. With the Wheel-Rite assembly bolted in place, it is then rotated to check for interference with suspension hardware and the inner and outer fender. This shot is for illustration only. To accurately check for any clearance issues, the suspension must be at proper ride height.