Horse Sense: Four lugs and horsepower. Can the two co-exist? Don't spout any "it's not possible" quotes of Mustang mythology if NMRA Renegade racer, George Seeger, is within earshot. George's '91 GT clipped off an absolutely senseless 8.614 e.t. at 160.33 mph at the '06 World Finals with only four bolts holding each wheel in place.

Be it through hearsay or firsthand experience, most Fox Mustang owners are all too familiar with the fact that there's a limited assortment of stylish aftermarket wheels available for four-lug '79-'93 'Stangs.

It's not that wheel companies don't have love for the first-gen, late-model Pony when it comes to producing things that suit its antiquated 4x4.25-inch bolt pattern. The 17-inch '07 Shelby GT 500, '03-'04 Cobra, and 16- and 17-inch '95 Cobra R wheels are probably the most popular four-lug stampings produced for nonconverted LX and GTs.

The simple truth is the majority of today's hottest bling and its coated or painted counterparts are produced as five-lug. That's the mounting configuration bestowed on Mustangs as standard equipment when SN-95s were unveiled in 1994. From an understandable business perspective, the transition ended most companies' ability to continue producing new wheel styles for Fox cars that still sit on four lugs.

It's important to keep in mind that the switch to five lugs wasn't necessarily done for appearance purposes. Improving a 'Stang's stopping ability is always good: It didn't take 'Stangbangers long to realize the best way to have looks and functionality with a five-lug swap on a Fox is to ditch the drum brakes in the rear and set up a true four-wheel, disc-brake system.

Once the 'Stang is lifted and its stock 10-hole wheels are set aside, Ricardo disassembles the front brakes, inspects the spindles, and cleans the area prior to installing the new front discs. SSBC's upgrade kit is a rotors-only deal up front, so it's important to hang on to all the other original parts since they'll be reinstalled.

Naturally, cost is a concern for any do-it-yourselfer. With that in mind, we thought it would be cool to check out an all-inclusive Fox five-lug-swap system (PN A112-2; $1,700) from Mike Jonas and his crew at Stainless Steel Brake Corporation. It's possibly one of the most cost-effective prepackaged setups to date.

While we concede the fact that Lee Kilcoyne's 200,000-mile '89 LX convertible doesn't have much in the looks department, the 'Stang is actually stout between the fenders, where a Dart-based, 375hp, naturally aspirated 302 bullet and a six-speed tranny reside. Underneath, it has a full collection of Maximum Motor-sports handling hardware. As a seasoned veteran of many an autocross, being hard on brakes is an understatement in Lee's case, but it validates our reason for choosing his car for this upgrade.

To test the swap kit's ease of installation, Ricardo Topete and Chris Balster of GTR High Performance tag-teamed on our five-lug conversion without using any air tools-except removing and installing the wheels with an impact gun. They had the car back on all fours-well, all fives-in about four hours. Getting a 'Stang safely elevated high enough is key. Once that's accomplished, you'll find SSBC stocked its kit with all the goods necessary to make the transformation easy. 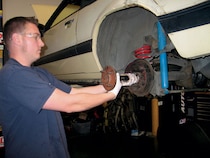 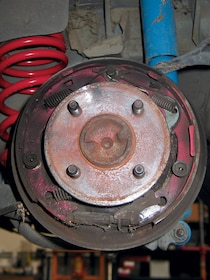 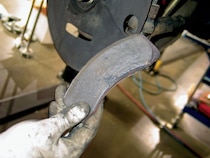 This 'Stang isn't the prettiest Pony we've worked with, but it runs like a thoroughbred, carving corners with the best of them. It now has improved stopping power and sits on nice five-lug wheels, which should be an incentive for Lee to handle the other beautifi-cation tasks.

Ricardo disconnects lines and mounting hardware for the 'Stang's factory master cylinder and removes it from the engine compartment. Due to the greater pressure needs of rear disc brakes, this piece has to go.

Anew master cylinder is a must-have component in a five-lug conversion project. SSBC provides a new master with its A112-2 kit since a Fox's factory pump won't support the fluid-pressure demand of rear disc brakes.

With the exception of making sure every nut and bolt is tight, bleeding a brake system (purging trapped air) is probably the most important element of any brake installation.

Many of you are familiar with the bleeding procedure, but first-timers should also have the knowledge. That said, here's a breakdown of how to properly bleed brakes on the bench and on a 'Stang.

The included new master cylinder is "bench bled" first, ensuring all the air is removed prior to installation. By doing this, the final bleeding of the new brake system goes a lot faster.

1. After raising the car and taking off the wheels, fill each of the master cylinder's reservoirs with fresh fluid.
2. Beginning at the farthest caliper away from the master cylinder, push a tube over the nipple on the bleed screw and place the opposite end into a catch bottle or pan.
3. Have a buddy sit in the car to pump the brake pedal a few times and tell you when the pedal is firm. With big-brake systems, the pedal may not immediately firm.
4. Have your friend press hard against the brake pedal and hold it, then crack open the bleed screw slightly to release fluid and air bubbles. Close the bleed screw right before the brake pedal reaches the floor and have your buddy release the brake pedal.
5. Repeat this procedure until you no longer see air bubbles coming out of the caliper. Remember to check fluid levels as you go. Don't allow the fluid level in the reservoirs to drop low enough to allow air into the master cylinder.
6. Do the same up front, beginning with the passenger-side caliper. Brake fluid flows quicker in the front, so it's important to monitor and don't let it get too low.
7. Put the wheels back on, top off the brake fluid, and seal the master cylinder.