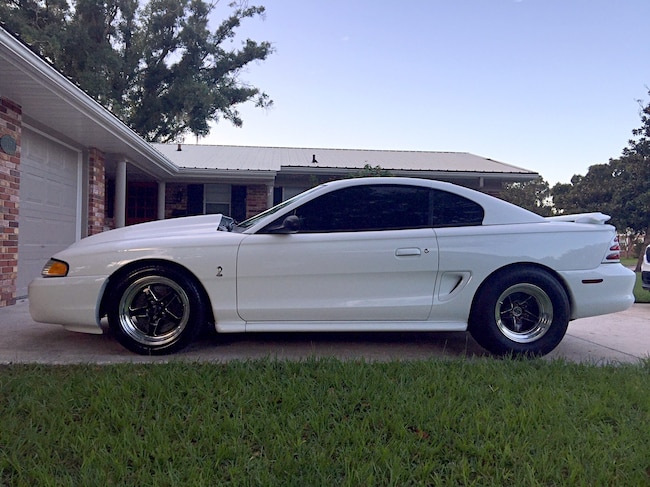 When it comes to tires for our Mustangs, there are so many manufacturers vying for our business that making a final decision can be tough. Furthermore, we have to narrow down what we want from the tires we choose, as well. Are we adding full-fledged street tires, drag tires, road race tires, or are we trying to bridge the gap between all three? That’s what gets most of us in a pickle, when we’re trying to have one set of tires for a variety of needs. As good as tire technology is these days, we’re still asking a lot from a tire to transition from the street to the track to the road course. That still doesn’t keep us from trying, though.

However, for a daily car in the Florida summer, where it rains every day, it’s not practical at all, so we needed a replacement. After some investigating and asking around we decided to stay with Mickey Thompson and go with their line of ET Street S/S radial. Mickey Thompson bills the ET Street S/S as “a street tire that can be driven on the track.” The S/S is DOT-approved, features the company’s proven R2 compound, but with a tread design to evacuate water, and keep your Mustang from hydroplaning.

As of this writing, we’ve had the ET Street S/S radials on the car for a week, but we have yet to see how they act in the rain. They’ve been the equivalent of adding new wiper blades to your Mustang in that since we added them, the rain has been avoiding us. However, once we have our first experience in the rain, we will bring you an update.

The Mickey Thompson ET Street Radial Pro tires that were on our Cobra when we purchased it was in the popular 275/60-15 size. We wanted to stick with something similar fitment for the street, and the ET Street S/S was the ideal choice. Adding the S/S gives us more confidence should we see rain clouds headed our way. Before we added the S/S, we dodged the clouds like an ex-girlfriend, but with them now on the car, bring on the rain.
When we would show pictures of the wheels, we would always get ribbed by friends for the rough-looking studs and lug nuts. The lug nuts were looking pretty beat up, so when we added the new S/S radials we also reached out to Weld Racing for a fresh set. Weld recommended its 601-1456 Race Shank lug nuts with washers, which we sourced from Summit Racing. We also did a little clean up on the studs while we were at it. The studs don’t look brand new by any means, but getting a hard time about their condition should be a thing of the past.
The day before we swapped out the ET Street Radial Pros we caught a ¼-inch nut driver in the left rear while driving down the interstate. You read that right, this thing was in our tire, with only the head of the nut driver sticking out. We thought we had seen it all, but when we pulled the nut driver out of the tire, we were wrong. We’ve picked up a few things in our tires over the years, but this ranks in the top 2 behind that piece of exhaust tubing from several years ago. We wish there was a photo of that, but that happened in the days of the Nokia flip phone.