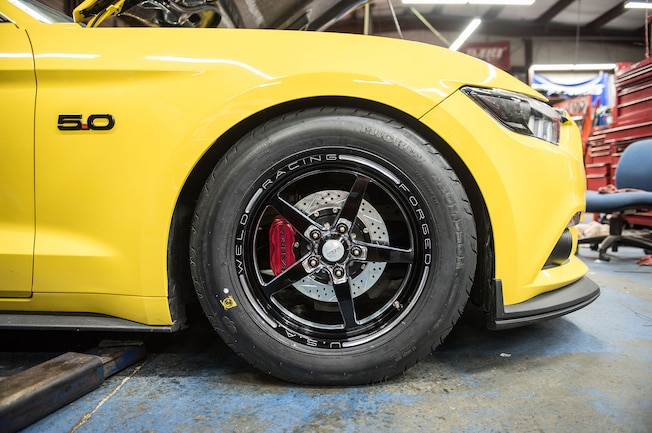 We learned in the Fox era that not having the right brakes on a car was a detriment to all-out performance. We concentrated so much on making horsepower back in the day that upgrading the car’s brakes was an afterthought. Unless you had an SVO or a 1993 Cobra, your Fox Mustang had disc brakes up front with drums out back. It’s one of the reasons the cars were so successful because it kept down the price of the cars. With the 1993 Cobra and subsequent Mustang generations, braking systems have become so much better.

However, whereas the factory systems have improved, there are times when even more braking performance is needed. If your Mustang is deep into the 10s (or quicker) you need to check out Baer’s new SS4+ Deep Stage Drag Race Braking System. We recently covered the installation of this system on Josh Baker’s 2015 Mustang GT Performance Pack by the able folks at Fastlane Motorsports in Benson, North Carolina.

Baker wanted to upgrade the brakes on his car for several reasons. Up front, since his GT is a Performance Pack, he was limited to 18-inch wheels. Out back, he was limited to 17-inch or larger wheels. “I wanted to run a DOT legal bias ply tire,” says Baker. “My car is a stick car, and I run NMRA True Street events, which require a DOT-legal tire. There were no DOT-legal bias-ply options for the 17x10 wheels at the time of the decision, and now only one option offered by Mickey Thompson. The switch also affords me many different tire choices so I can change up the tire sizes down the road.”

Baer’s SS4+ Deep Stage Drag Race Braking System will allow Baker a few choices when it comes to drag wheels and tires. He says, “The change on the front allows me to run a 15- or 17-inch wheel, which saves more weight and gives me more options. With the performance package, I was limited to 18-inch front options due to brake size. Out back I’m running a 15x9 from Weld Racing. This should enable me to be more aggressive with launches due to the increased sidewall while minimizing stress on the drivetrain, and improve my 60-foot at the track. Losing 100 pounds in calipers and rotors doesn’t hurt either—S550s definitely need a diet.”

Baker reports that his 2015 Mustang GT lost 100 pounds by replacing the factory brakes with the Baer system. This system is available for Fox Mustangs with SN95 spindles but, as of this writing, not for stock Fox spindles. Otherwise the SS4+ Deep Stage Drag Race Braking System is available for pretty much every 1994-2017 Mustang.

For 2015-2016 Mustangs, Baer’s system features the company’s S4 four-piston calipers with two-piece, 11.625-inch slotted, drilled, and zinc-plated rotors up front. Baer says this system is designed just like its larger brake systems, but whereas the larger braking systems require a 17-inch or larger wheel, the SS4+ system allows you to run a 15-inch or larger wheel. Baer says the SS4+ is the “first drag race system designed specifically for heavy, fast cars that might see street use.” The company also says the SS4+ comes with a brake pad compound optimized for drag racing needs, which may cause increased noise and brake dust compared to street pads.

Out back, the SS4+ system features the same 11.625-inch rotors and four-piston calipers. The rotor’s smaller size enables the use of a 15-inch wheel. Again, the good news about the Baer system is that you will be able to use your choice of a 15-, 16-, 17-, or 18-inch wheel. That flexibility lets you decide which wheel setup to use regardless of whether it’s for the street, strip, or both.

Regardless of the goals you have for your Mustang, Baer’s SS4+ Deep Stage Drag Race Braking System will help you accomplish them.

01. Baer’s SS4+ Deep Stage Drag Race Braking System is a comprehensive replacement for your Mustang’s stock brakes. In Josh Baker’s case, his Performance Pack Mustang’s brakes kept him from optimizing the car’s drag presence. Both front and rear rotors are 11.625 inches, which enable the use of any size tire and wheel you decide—even a 15-inch design. Clamping down on those rotors are Baer’s S4 four-piston calipers with brake pads specifically engineered for the company’s own Deep Stage Drag Brakes. Baker chose the standard Fire Red finish on the brake calipers; it’s important to note that clear is also available as a standard finish. There’s a wide variety of colors available to give the braking system a custom touch.

03. With the factory brakes removed, Skinner adds longer ARP studs. Baker chose ARP’s 014-7703. “These wheel studs were developed by ARP for Steeda to be a direct fit on 1979-2004 rear axles and share the same knurl diameter of the stock 2015 hubs,” explains Baker. “The rear bolts must be notched prior to the install while the fronts simply bolt in.”

04. With the studs in place, the new Baer two-piece rotors can be installed.

05. For S550 Mustangs, the Baer S4 calipers bolt on to the stock spindle without the use of conversion brackets. Skinner attached the calipers and torqued the bolts to 58 lb-ft.

07. With the factory calipers and rotors removed, Skinner removed the spindle. Note: We are removing the spindle so the new ARP studs can be installed out back.

08. Even after removing the spindle, Skinner must disassemble the hub from the spindle in order to install the ARP studs.

10. Along with adding the physically smaller Baer brakes, there are also a couple areas to trim. These clearances are needed for the larger wheels that Baker wanted for his S550. “In order to provide proper clearance for the wheels out back, we had to grind down a nub on the lower control arm and the lower vertical link bolt,” he says.

11. Once the trimming was done, Skinner could install the rear rotor in place.

12. With the rotor positioned, Skinner installed the caliper, making sure to use thread sealant on the caliper bolts.

13. There you have it! The Fire Red calipers lend a little contrast to the car while enabling the install of drag-specific wheels and tires. Along with the brake upgrade, Goodridge stainless steel lines (PN 12366) also augment braking performance, as do Dorman brake hose banjo bolts (PN 13912).