Simple Braking Performance Enhancement on a 2003 Mustang with Maximum Motorsports 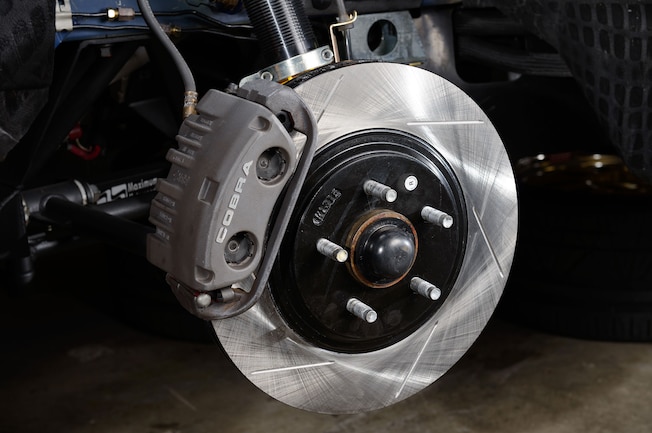 With the introduction of the 1995 SVT Mustang Cobra, Ford equipped the Mustang with its first competent brake package in history. Sure, two-piston 13-inch brakes sounds modest by today's standards, but merely offering disc brakes on the rear axle of a Mustang was a revelation.

The contemporary translation of "brake upgrade" often means installing gargantuan calipers with a six-pack of pistons clamping serving-platter-sized rotors, but Mustang owners can yield a significant increase in stopping power by simply adding higher-friction brake pads and a fresh set of rotors. There are several benefits to a simple pad and rotor upgrade: reduced cost, low weight, and simple installation—not to mention that many "big brake kits" often require different wheels for clearance.

For a street-friendly brake upgrade for a 2003 Cobra, the Mustang experts at Maximum Motorsports recommended a set of Hawk Performance HPS pads and StopTech Sport slotted rotors. Swapping pads either requires scuffing the existing rotors with 130-grit sandpaper, or installing fresh rotors. We chose the latter.

A word of caution from Chuck Schwynoch at Maximum Motorsports whenever handling brake calipers: "Do not hang or drop the brake calipers from the brake hoses, especially if they are Teflon-lined braided stainless steel hoses. My techs have strict instructions that if a caliper is dropped on one of our cars, they are to immediately replace the hose, even if there is no apparent damage. I don't want a stress crack to lead to a later failure!"

Besides trying Hawk's HPS pads, we also sampled another popular brake compound from Hawk, the HP+. There were distinct differences between both compounds. Where the HPS took a stop or two before delivering the responsiveness we expected, the HP+ pads "bit hard," even when completely cold.

The high initial bite of the HP+ pad also made them feel slightly grabby. The HP+ pads required considerably less pedal pressure to slow the car down. In comparison, the HPS pads provided a more linear braking response but took more pedal pressure to generate the friction required for the same braking performance.

The high-friction nature of the HP+ pads also locked up the front wheels more easily when applying the brakes quickly.

While the HP+ compound has a reputation for being very noisy, we only experienced a little squeak here and there on our test car. Our theory; the Cobra's stock "sliding" calipers have a lower resonant frequency than stiffer, rigidly-mounted calipers. As expected, the Hawk HPS pads were completely silent.

All brake pad manufacturers recommend a break-in or bedding procedure for their high-performance or racing brake pads. Bedding builds up heat in the rotors and pads in small increments and transfers a thin layer of friction material into the surface of the rotor. Hawk Performance says that proper break-in will ensure that small amounts of heat are introduced to the brake pad. "Brake pads that are brought up to temperature too fast and not properly allowed to cool down may quickly become glazed and not perform as originally intended. The pad's rubbing surface reaches extreme heat levels during racing use. The surface needs slow temperature increases to help prepare the pad. Large amounts of heat all at one time can cause the brake pad rubbing surface to become somewhat liquefied and coat the pad surface with a glaze. This will dramatically reduce stopping performance as certain ingredients in the friction compound break down and cause glazing of the rubbing surface of the brake pad."

For a street-friendly brake upgrade for a 2003 Cobra, the Mustang experts at Maximum Motorsports recommended a set of Hawk Performance HPS pads and StopTech Sport slotted rotors. Swapping pads either requires scuffing the existing rotors with 130-grit sandpaper or installing fresh rotors. We chose the latter. We also tried Hawk's HP+ compound for comparison.

We began our brake upgrade at the rear. First, we removed the brake caliper from the caliper bracket.

We rested the caliper on the rear suspension and removed the brake pads from the caliper bracket.

In order to swap the rotor, we removed the caliper bracket.

With all of the caliper parts out of the way, we removed the brake rotor.

To improve brake cooling, we removed the OEM splash shields.

After cleaning the StopTech Sport slotted rotor thoroughly with brake cleaner, we slipped it onto the rear hub. Note how we held the rotor by its edges to avoid contaminating the friction surface with our greasy hands.

We used a brake piston tool to screw the self-adjusting rear piston back into the caliper. Be sure to align the slots in the piston vertically before installing the pads, as there's a stud on the pad that must fit within the slot on the piston. If you don't do this, the caliper pistons won't push flat on against the pad.

Hawk Performance includes high-temperature brake parts lubricant with its pads. We used a small brush to apply a thin layer of grease on the backing plates and anti-rattle clips.

Then we reinstalled the calipers.

After tightening all the fasteners to the specified torque on the rear brakes, we turned our attention to the front brakes.

To free the calipers from the caliper brackets, we pulled the retaining clip and pin.

To remove the caliper, we wrestled the caliper back and forth to push the pads apart enough to get over the wear ridge on the rotor.

Next we removed the caliper bracket from the spindle.

With the caliper bracket off, we could remove the rotor.

To keep the rotors from rusting during storage and shipment, they're coated with oil. We cleaned both sides of the new StopTech Sport Slotted rotors liberally with brake parts cleaner to remove any oily residue and avoid contaminating the Hawk HPS pads.

We removed the old brake pads from the front calipers

To make room for the new Hawk HPS brake pads, we used a large pliers to gently squeeze the pistons back into their bores. (You can also use a large C-clamp.)

We installed the Hawk HPS pads into the calipers.

When installing the Hawk HPS pads, we applied a thin layer of the included high-temperature brake parts lubricant on the backing plates and where they slide on the caliper brackets.

After reinstalling the caliper brackets and calipers, we were done turning wrenches.

With the car back on the ground, we pressed the brake pedal a few times to shove the pads against the rotors and checked the brake fluid level in the reservoir to make sure it didn't go overfull when we pushed the pads back into the calipers. Because brake fluid eats paint, we covered the surrounding components and sucked out the excess fluid with an old turkey baster.

Next, after we bedded the brake pads (see side bar), we were rewarded with improved bite and overall braking performance. Both the Hawk HPS and the HP+ were an excellent upgrade for our dual-purpose car. We can't overemphasize the importance of bedding the pads. Before and during the initial bedding, the brakes felt a bit soft and lacked the bite we expected. However, after bedding the pads and letting them cool, the brake pedal feel improved significantly and the brakes gave us noticeably more stopping power than the OEM binders.

The different characteristics of the Hawk HPS and HP+ pads are clear in this chart from Hawk. Note the dramatically different friction curves for the HP+ (green trace) and HPS (pink trace) compounds. The big difference is at the cold end of the spectrum. The HP+ has a very high coefficient of friction at low temperatures, whereas the HPS compound (pink trace) builds friction gradually with temperature. Between 400 and 600 degrees F, they offer about the same braking performance. On the upper end, the HP+ gives up a little later than the HPS. Hawk's latest compound is the StreetRace formula (black trace, also labeled DTC-30). When cold, it appears to be a compromise between the HP+ and the HPS, but it generates considerably more friction and can tolerate much higher temperatures. We might have to try that compound in the future.