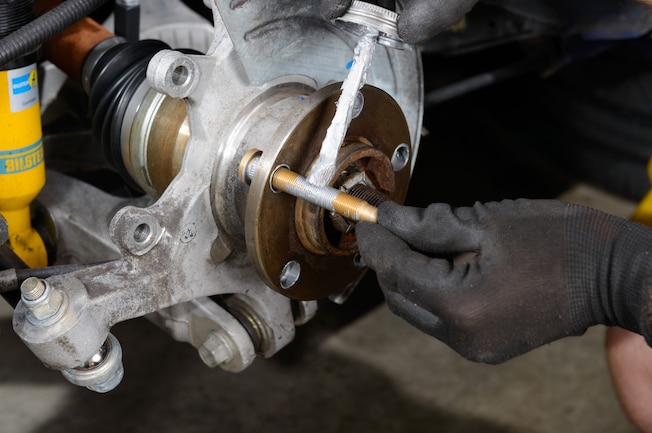 Installing different wheels or wheel spacers will sometimes reduce the number of threads inside the lug nuts, which is referred to as the lug nuts’ thread engagement. When we installed a three-piece rear wheel on a 2003 Mustang Cobra, a small 1/4-inch spacer was required to get the perfect offset. Unfortunately, the spacer only allowed 6 1/2 threads to engage the lug nuts. According to Maximum Motorsports, six threads of engagement is the minimum, but some sanctioning bodies require a certain number of exposed threads beyond the lug nut to pass technical inspection. Since we didn’t want to raise any eyebrows at the track, we went ahead and installed longer ARP wheel studs from Maximum Motorsports.

Installing longer studs is pretty straightforward, but as with anything, the devil is in the details. Maximum Motorsports advised us how to install them on our Mustang without cutting corners.

Most aftermarket wheel studs have a slightly larger outside spline diameter than the OEM Mustang studs, and it’s important to drill the hubs to the proper size. Says Maximum Motorsports’ Jack Hidley, “When an aftermarket stud is pressed into an undersized hole, the metal has to move somewhere to allow the stud to fit. Since the flange is so flexible on this outer edge, the stud location moves outwards as it is pressed in. Instead of the stud pattern ending up on a 4.500-inch bolt circle, it ends up on a 4.520-inch bolt circle.”

Besides drilling the holes to size, there are a few other tricks to installing longer wheel studs. Follow along as we detail how to do this job easily and properly.

1. When we installed a three-piece rear wheel on a 2003 Mustang Cobra, a small 1/4-inch spacer was required to get the perfect offset.

2. Unfortunately, the spacer only allowed 6 1/2 threads to engage the lug nuts.

3. The way to solve our thread engagement problem was longer ARP wheel studs from Maximum Motorsports.

4. We began the installation by removing the wheels.

5. Then we slipped off our Maximum Motorsports 1/4-inch spacer.

7. Then we removed the brake rotor to gain access to the wheel hub flange.

8. We acquired a few special tools for this job. To open up the hub flange holes to the proper size, we ordered a 39/64-inch drill (PN 29415A27) from McMaster-Carr. (The three flats on the side of the drill bit prevent it from slipping in the drill chuck.) Pulling studs takes a lot of force, so we used Lisle 22800 stud installer and an old open-ended lug nut.

9. The easiest way to remove the old studs was to hammer them out. To provide a larger hammer surface, we threaded an old lug nut onto the stud.

10. A few whacks with a heavy hammer easily removed the old studs.

11. With the hub flange in an orientation for clearance, we removed the old stud.

12. You can easily see the length difference between the OEM (top) and ARP stud from Maximum Motorsports (bottom).

13. We applied a liberal amount of dark cutting oil to the stud holes in the hub flange.

14. We used a stack of spacers over the drill to keep the drill from crashing into the upright after it pierced the hole.

15. We applied dark cutting oil to the tip of the drill bit.

16. Using a heavy-duty drill with two handles, we drilled the stud holes to size.

17. The spacers controlled the depth of the drill as well as kept the drill bit perpendicular to the hub flange as we finished the hole. We repeated the process for the remaining lug holes.

18. We prepared the ARP studs by applying antiseize compound to the stud splines.

19. With the first hole aligned to the cutout in the spindle, we inserted the stud.

20. We applied a liberal amount of antiseize compound to the stud threads to keep them from galling during installation.

21. The Lisle 22800 stud puller makes installing wheel studs a breeze because it has a thrust bearing to reduce friction dramatically.

22. We slipped the stud puller and an old lug nut over the new stud.

23. Finally, we pulled the stud into place with an impact wrench.

24. With our new ARP wheel studs from Maximum Motorsports, we now have threads to spare!