An all-season performer that grips like a UHP tire and sports a 50,000 mile warranty

Unlike road courses with smoother lines and higher speeds, most autocross courses require constant transitions between aggressive throttle, braking and steering inputs. Good autocross courses have a knack for quickly uncovering faults within a chassis or tire that spirited street driving will never unearth. But if you really want to push the envelope, try running the very same autocross course with wet and dry sections, that’s where the performance potential of an all-season tire is really put to the test.

The clock hands still hadn’t touched high noon and the searing Arizona heat at the Bondurant School of Performance Driving facilities was already enough to cook an egg on the tarmac. But I didn’t let that deter me from making hot laps around the autocross course in a new Lincoln MKZ before hopping into the fleet of new Audi A4 2.0T Quattros for comparison tests. During a recent tire launch, Goodyear officials sent each journo out for hot laps in the aforementioned Audis shod with their new Eagle Sport All-Season tires, a new high-performance (HP) all season tire slotted just below the Ultra High Performance (UHP) Eagle F1 Asymmetric All-Season. We experienced the Eagle’s around the track first, before jumping into the very same cars shod with a leading competitor, the Firestone Firehawk Wide Oval AS. The test track in question had low- and high-speed slaloms along with several decreasing radius turns and a threshold-braking area intermingled in the wet and dry–variety was the word of the day.

The first few laps in the Goodyear-shod Audis were remarkably fun, as the car stuck well in the dry and hung like a champ in the wet. Understeer set in at the limit, but in true Audi form, some lift-off oversteer was only a foot wag away. In all honesty, I’d forgotten I wasn't in a UHP tire until I hopped into the Firestone-equipped test cars. Within three corners with the Wide Oval’s I’d already blown two apexes, nearly clipped several cones, and while it was admittedly fun to slide the Audi like I was Vaughn Gittin Jr. (I’m not!), the first wet turn induced so much understeer I slid to the outside of the turn and nearly ate the cones. If this was real life, I would’ve been well into the gravel–not cool. And then I was reminded that we weren't testing max-grip tires here, but rather all-season performance hoops made for everyday and every season–the fact the Goodyears had performed so well that I’d forgotten their price-point nature was impressive. 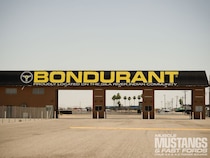 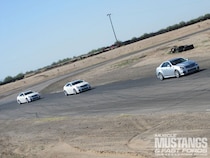 UHP Performance on an HP Budget
Although the new Eagle Sport All-Seasons (which replace the Eagle GT) performed well at the limit, both in the wet and the dry, it’s important to remember that the this is an HP all-season tire more akin to a Firestone Firehawk Wide Oval or a Bridgestone Potenza RE97AS rather than a Michelin, Pirelli or Continental all season tire–Goodyear competes in that category with the F1 Asymmetric. While the all season UHP tires are considered the highest performers, it’s no secret they give up winter traction for better wet and dry adhesion. But Goodyear was willing to sacrifice some outright numbers for truly capable ice, snow, and winter performance in the Eagle Sports–and the tread design is tangible proof Goodyear wasn’t bluffing. Like the full-depth sipes (thin slits cut across the rubber surface) that maintain a biting edge for the full life, unlike others that only feature half-depth units. The blade type portions of the tread blocks also help with snow and ice performance for great all-season performance. If the come one, come all nature of these all-around performers isn’t evident enough already, the fact Goodyear offers nearly 50 different sizes and expects to see them in OE applications is proof that no matter what you’re driving, you’ll likely find a fit.

Technology Ripe
It’s no secret that tires are far more complicated than simple black balls of rubber, but the technology inside the latest models is still mind-boggling. Some of the tech highlights in the Eagle Sports include plenty of catch phrases that include the term “tread,” like TredLock, TripleTred, and ComforTred. What does all of this mean to the driving experience? Optimized traction across wet, dry, snow, and icy conditions while remaining confidence-inspiring and communicative in the corners and quiet on the highway. Other noteworthy specifications include a new blend of silica-enhanced rubber with an even greater treadwear warranty, which means these high-performance haulers carry a true 50,000-mile warranty for V- and W-rated tires. Let’s also not forget the Canted Grooves that slant the angle of the tread-block walls for more stability under high cornering and braking loads. 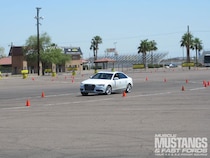 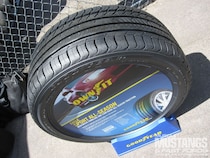 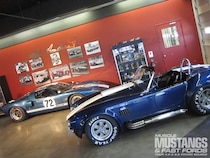 Where the Rubber Meets the Road
Building a competent all-season HP tire can be a daunting task because it has to master many categories; like offering the performance of a UHP and the ride of a touring tire at a price-point well within reach of most budgets. Every other category of tire falls into a niche deep enough that it’s not expected to excel beyond its limited scope, but an all-season high performance tire is a tough gig because it has to be well-rounded (pun intended).

Although our testing regiments were limited to a wet and dry autocross track, I can vouch that the performance levels of the Eagles are remarkably high, and considering their 50,000-mile warranty, it’s a tough tire to beat. While road noise and NVH might be more pronounced than some OE tires, I’d gladly trade some comfort for more all-season performance. After all, what’s comfort when you can’t panic brake, emergency lane change, or swerve to miss a dear?

Pricing for the Eagle Sport All-Season tires isn’t available yet, but visit www.goodyear.com for the latest info.