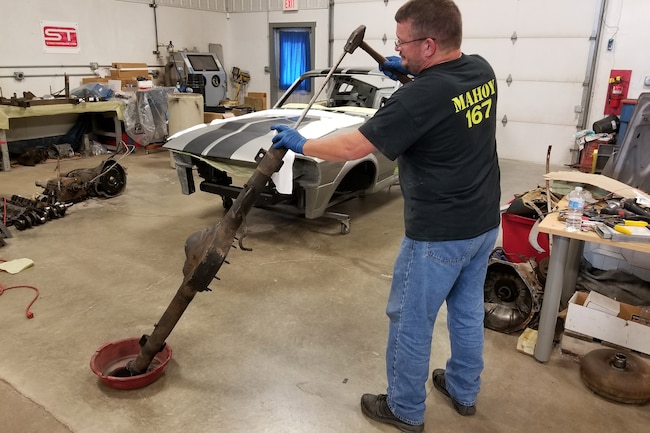 I bought a pair of stock small-block “Power by Ford” valve covers at a swap meet for my 1969 Mustang’s 302 engine and they had these weird extenders on them. Was that to keep the plug wires from the exhaust? Is it original?

The brackets are original, but not for your car. In 1968, Ford made those ignition wire extenders for a short time to keep the wires off of the externally mounted Thermactor tubes on some of the Cleveland foundry engine assemblies. These extenders were long and they would crack the spot weld on the ignition wire mounts. Some early versions had a third spot welded down the side of the cover. Ford stopped using the extenders and began using a heat sleeve like they did on the FE engines. They were not used in 1969, but don’t throw them away—someone out there needs a set of those for their restoration!

These 1968 small-block valve covers have a pair of extenders mounted to the ignition wire holder mounts with small screws to allow the wires to avoid touching the Thermactor tubes. They were only used for a short time, as the mounts tended to crack. Some early versions had a mount that had a third spot weld down the side of the cover.

I’m trying to change the rear axle seals in my 1970 Mustang and I cannot get them to come out. I bought a seal puller but it does nothing. Help!

Seth N.
Via the Internet

If your tool is one of those seal pullers that looks like a handlebar moustache on the pulling end, throw it in the trash. I have never been able to successfully pull 50-year-old axle seals with one of those. You need a slide hammer with the correct pulling end to do the job properly. If the axlehousing is still in the car, you shouldn't have any problems with the seal coming out.

If you did like I do and tore the axle all the way out and down to the housing and had no help holding the axle while you pulled (or if you couldn’t find the right slide hammer adapter), you could use a long piece of pipe and drive them out from the back side. I have had to do this myself when working alone! Just remember when installing the new bearing to put a little grease or oil on the new seal to avoid tearing the seal during axle installation and your first drive.

This type of puller is not up to the task of pulling an axle seal frozen in place after 50 years. Time to move from “please come out” to “I wasn't asking.”
Some auto parts tool rentals carry a slide hammer with the correct adapter to pull the seal. It slides in at an angle and then lies flat against the back side of the seal. This setup works great if the axle is still in the car.
If you take the axle out of the car, are alone, and are stuck, a long pipe against the lip of the seal will work to drive the seal out from the back.