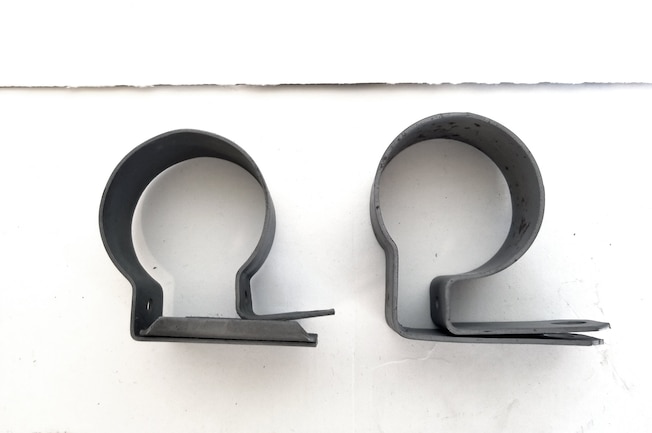 My coil on my 1969 Mustang’s 351 engine won’t mount up with the chrome coil bracket I bought. It says it is supposed to fit. Is the factory 1969 bracket different?

The bracket on the left is the standard bracket, which carries Ford part number B8S-12043-B (Motorcraft DY-52) and was used in most applications, even though there are a couple of variants. In 1969, Ford moved the coil back to the passenger-side cylinder head and used the bracket on the right, which carries part number C8TZ-12043-A (Motorcraft DY-70), to help clear the dipstick tube.

In 1969, Ford moved the coil back to the passenger-side cylinder head, where it was from 1965-1967 (with the exception of emission control when it was mounted on the intake), but the dipstick tube now ran to the inside of the coil rather than the outside as it had previously. To compensate, Ford used a truck coil bracket, part number C8TZ-12043-A. To better confuse the issue, there were four different versions of the B8S-12043-B bracket used on all the other applications, and I think they used the truck piece on the 302 as well in 1969. The Motorcraft replacement part number is DY-70 if you want to look for it online. Pretty sure they don’t make it in chrome, so if you want to use your chrome strap you can also run an aftermarket dipstick and connect it under the alternator.

Any recommendations on a new sway bar for my 1969 Mustang? How does it work and why not just install the biggest one available?

Bill Miller
Via the Internet

The stock bar below measures out at 0.685 inch, while the Addco bar (PN 715 shown) is a 1-inch bar. The bigger the radius of the bar, the harder it is to twist.

Which one you use is generally dependent on what type of driving you want to do in your car. You didn’t mention what engine/drivetrain combination you have, so I will give the generic lowdown.

The front sway bar (I prefer the term antiroll bar) is nothing more than a big torsion spring to keep the body from rolling over in a turn. The bar, when twisted down its length, acts like a big spring. When the car is rolling along and the wheels are moving together, the bar rotates around the frame mount points. In a turn, one side is compressing and one side is rebounding, and the force on the rollbar gets twisted, which transfers the energy over to the other side of the car, reducing the “roll” of the vehicle.

Ford generally stuck with a 7/8-inch bar on base Mustangs, and some “GT” handling packages were around 15/16 inch in diameter. Most aftermarket bars start at 1 inch and they can get 1 1/4 inches for a bar that uses the stock location. Any bigger than that and you start having fitment problems with the stock mounting location. Length of the arms is also limited by the original suspension envelope.

If you think you need to improve the rollover of your car, the good news is that the aftermarket bars have been made to really work well with the original suspension. Unless you are seeing serious track time, the Addco 1-inch sway bar is engineered right and will help with whatever suspension you decide to use. Good luck with the ’69!