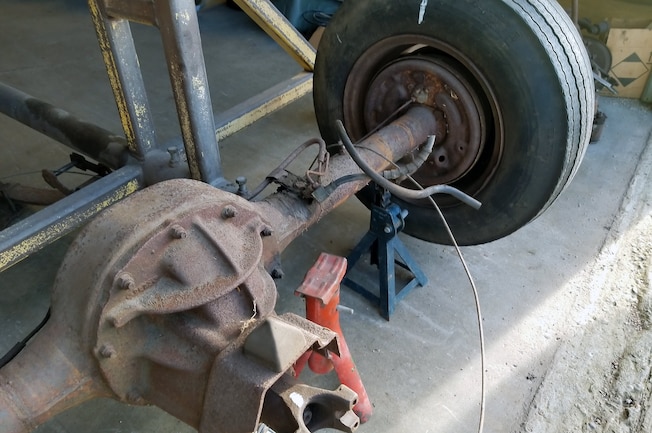 I am in year two of a rebuild on my 1969 Mustang SportsRoof. I have a 5.0L engine with mild cam and 0.030-inch overbore. What I am not sure of is what type of rearend I have. The seller told me his grandfather used the car to drag race in. I am pretty sure he did this, because the 302 engine that came with it was bored out with an Edelbrock Torker intake manifold, four-barrel Edelbrock carburetor, and Hedman headers for exhaust. Also, one cylinder was blown so badly the engine was unusable. What I don’t know is the rearend now in the car. I know it is an 8-inch, but do not know how to check and see if it is a posi or open rearend. Is there a quick and easy check for this without tearing into it?

Dan
Via the Internet

The easiest way to check for a posi is to put it up on jacks so the wheels are free. With the front wheels chocked and the car in Neutral, rotate one of the rear wheels forward. If the other wheel also rotates forward, it is a posi. If it rotates in the opposite direction, it is a normal open carrier.

Once you determine if it is a posi or not, you can estimate the gear ratio. Make a mark point on the wheel and driveshaft yoke for a starting point. With the front still chocked and the transmission in Neutral, simply count the number of rotations of the yoke required to make one revolution of the wheel. If you have a 3.50 gear, then with a posi the yoke should turn approximately 3.5 times.

If you have a non-posi, have a friend hold or prevent one of the wheels from turning (there is slip in the open carrier, so you need to keep one wheel from spinning). Spin the wheel 10 times and count the number of times the yoke goes around and multiply it by two. If you have a 3.50 gear, it should go around 17.5 times. 17.5 x 2 = 35, then divide by 10 to get your 3.50 gear ratio.

To determine if you have a posi or an open centersection, raise the wheels off the ground, chock the front wheels, and put the car in Neutral. Spin one wheel—if the other spins the same direction, it is a posi; if it spins the other way, it is an open carrier. You can approximate the gear ratio by counting the number of times the yoke revolves versus the wheel by marking them and counting the rotation. This is a non-posi, so we held one wheel and spun the other ten times and the yoke went around 15 times. 15 x 2 = 30, divided by 10 gives us a 3.00 axle ratio.

The fastest way to tell a 170ci inline-six from a later 200ci version is to check the number of core plugs in the side of the block. The earlier engines will have three core plugs, and the 200s will have five; unless you are going back to all original, stick with the 200. It has seven main bearing caps as opposed to four for the 170, which means more bottom end strength and better harmonics in the engine.

Early 144 and 170 engines had three core plugs in the side. You can just make out the four main caps protruding under the engine.
The later 200ci engines got five core plugs. The seven main caps helped with the engine harmonics.