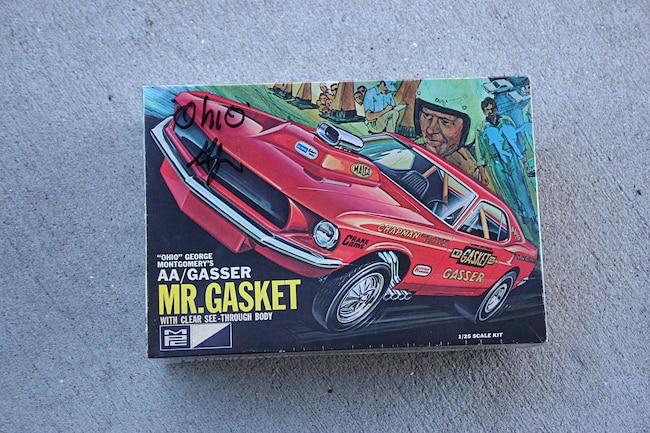 Ohio George Model Kit
I am a collector of vintage Ford Mustang model kits. I’m looking to find a 1969 version of the MPC Ohio George Gasser Mustang; the red car. I have the clear body kit. This kit is supposed to have red car on the box art. I understand you have the real car so I thought you may have the kit. A picture would be helpful for identification. Thanks for any help.
Ben Michael
Joplin. Missouri

The MPC kit you are looking for is 725-200. I only have one kit. I have seen a few on eBay that were incomplete or painted, etc. The box art is very cool in my opinion. I will include a picture for reference. Good luck in your search.

Correct Boss Bolts
We have a 1970 Boss 429 Mustang we are restoring. The car was a former drag car with fiberglass fenders. I would like to use factory correct fender bolts with correct factory markings. I see several different markings available for the ’69-’70 Mustang. The car was built November 26 according to our Marti Report. Thanks.
Tom Bednarek
Chicago, Illinois

There were a couple of different fender bolts that were used during the November-December 1969 time frame at Dearborn assembly. The fenders were not removed at Kar Kraft, so the fender bolts were installed at Dearborn assembly plant. I have supplied a photo of the bolts used on KK2521, also built in late-November 1969. The correct finish on the bolts is clear Cadmium. These bolts are common on many ’69-’70 Mustangs and other ’69-’70 Ford products.