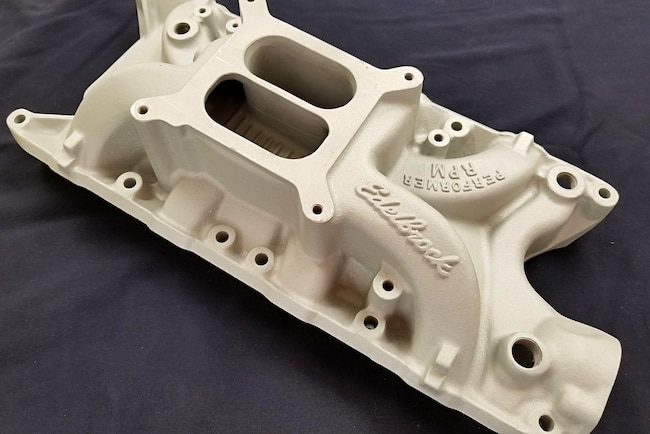 Correct-Looking Aluminum
For years I have been searching for a really good coating for protecting aluminum intake manifolds, and I think I have finally found one that doesn’t look like the intake has been coated. Spray paint aluminum looks awful, clear powder and sprays look awful right after the engine has heat cycled, and powdercoats are often too bright and stand out way too much.

As you know, aluminum is very porous, and the first time you touch it with a greasy finger you are done. Likewise, gas drips stain and saturate the metal and do not come off. There used to be clear sealers, but they needed refurbishing every couple of years.

I recently visited Pro-Kote Indy [(317) 872-0001; prokoteindy.com] and finally found a bare aluminum powder that looks like, well, bare aluminum—not a bicycle reflector. It is a proprietary color used in the aerospace industry so they can’t give out the code (or so they say), but it really is the closest I have come to real replication of aluminum intakes. It is an epoxy hybrid powder, which means it has higher-temp resistance, and it has a slightly coarse finish that actually replicates the as-cast look. The hybrid powder also allows for better color over straight epoxies. I have seen major suppliers’ “aluminum” powders, and they don’t get it right; they look like the manifold has been painted. This one gets it right. I could see this being used for all manner of aluminum engine and drivetrain parts for that as-new and correct finish for your restoration. Another great tech tip from your Uncle Dave.

Just What Is This?
What is this thing hanging out of the driver side of my 1970 Mustang? It looks like a big transistor. Photo attached to show what I’m talking about.
Robert & Travis E.
San Antonio, Texas

That is a temperature sensor, and it is used on 1970-1971 Mustangs as part of the Distributor Modulator system. It was used on 250 inline-sixes, 302s, and 351s. Remember 351s didn’t have a smog pump, and this may be one of the reasons. The temperature sensor is mounted to the outside to measure ambient temperature to switch on and off the control circuits to the modulator, which is mounted up and under your dash by the fuse box and the e-brake. When the ambient temperature gets to about 58 degrees, the switch closes and turns on the box. There are two vacuum hoses connected to the box—one runs to venturi vacuum (that controls your distributor advance) and one runs to the advance itself. When you reduce the timing advance, the burn is much hotter and this burns more hydrocarbons and provides a cleaner exhaust. There is a third component, which is a speed monitor that is inline with the speedometer cable. This is used to signal the modulator to work at speeds above 23 mph. The Modulator controls were also used on some cars that came with throttle modulation.

Your “transistor” thingy is actually a temperature sensor that senses outside air temps. The part number is D0AF-12A164-B, and it turns on the emissions system when the outside temperature rises above 58 degrees.
This is the valve and printed circuit box for the Distributor Modulator system. It is part number D0AZ-9E718-C (marked AC on the lid in a stamping). It controls the vacuum advance at temperatures above 58 degrees and speeds above 23 mph by reducing the timing to the engine. Not pictured is the Speed Control Sensor (D0AF-9E731-A) that connects into the speedometer cable, which tells the valve and circuit system how fast the car is going. Special speedometer cables are used; the lower is 42.25 inches long (service number D0ZZ-9A820-B all but Drag Pak, which is D0ZZ-8A820-E) and the upper one is 10.54 inches long (service number D0ZZ-9A820-H).