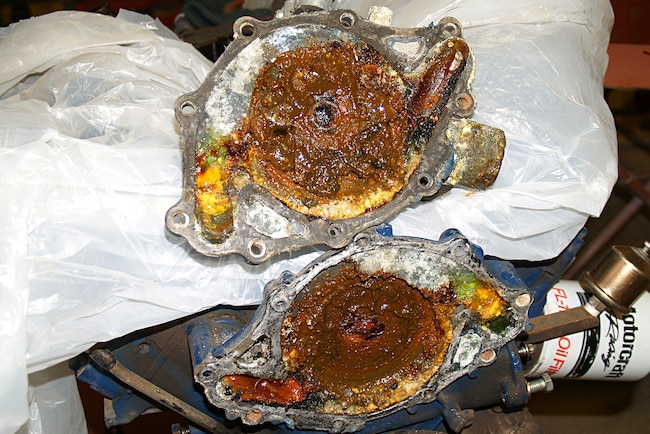 In this column we have talked many times about cooling system issues, and my response is usually that the problem is an obstruction somewhere. Well, I now have the opportunity to show you the apex of all I have been bloviating about all these years!

I was pulling a 289 out of a 1965 Mustang to detail that “ran when parked” nine years ago. While fiddling with the water pump I noticed that the pump wouldn’t turn. I pulled the pump and found what you see in the picture. The engine was immediately sent to the machine shop for a rebuild.

This system was neglected for a long time, and the storage of the engine only made it worse. We have a full chemistry lab of things going on in this engine: The brown mud and rust was eating away the impellers of the water pump and was caused by running tap water. We also see biological slime buildup from weak antifreeze and sand from the original casting of the block. The white corrosion from the aluminum pump was caused by weak antifreeze. Calcium buildup was from using tap water, and a weird Vaseline-like substance that completely clogged the passenger-side port was probably from using additives to condition the coolant or some kind of stop-leak. I believe the long-term storage allowed these additives to gel and clog the whole system.

A cooling system that is well designed and well maintained should only be filled with antifreeze and distilled water. Water is actually very good at transferring heat. Distilled water is mineral free, which means you are not adding extra items that react and corrode. Minerals like calcium build up over time and damage seals and clog ports.

Antifreeze is used to lower the freezing point to prevent the water from expanding and breaking things, and it raises the boiling point. It also acts as a corrosion inhibitor, lubricates the seals, and inhibits biological slime buildup (the black goo you find on the radiator cap)—all the things water isn’t good at alone. When antifreeze contacts air, it begins to break down similar to brake fluid. All this is happening to your engine right now. Here are some tips to keep it from getting as bad as the engine in the photo.

Long-term storage of engines means that any problem that was in the cooling system before parking the car will only get worse sitting around. If possible, completely flush the system prior to long-term storage. If it is in the pump, it is in the whole engine.

2. Stick to the same antifreeze brand if possible. I do not know, other than mixing GM Dexcool and “regular” antifreeze, whether or not different brands will react to each other. If changing brands, flush the system.

3. Learn to enjoy flushing your coolant system. Most of us let the antifreeze go because it still looks green. The antifreeze is hitting the expansion pocket on every lap around the cooling system. Casting sand from when the block was cast can still get pulled up and into the coolant flow. Sitting over the winter allows slime buildup on the top of the expansion tank. Make flushing part of your spring prep.

4. Using additives in general means that there is a problem with the system. If using the stop-leak gets you home, fine, but don't use it for normal operations. Flush and repair the system.

5. Long-term storage: There are two camps here—one that says to drain the system completely and one that says fill it with 100 percent coolant. I am in the second camp. Draining the system completely leaves moisture and air in the passages, the combination for corroding your block and heads. One hundred percent antifreeze is the stuff that prevents that, and if you forget and start the engine without checking the coolant, you are better off than if you warm it up empty.

6. Water conditioners: I have used them myself—once on a parade car that idled for miles. The reports on water conditioners are mixed. Water conditioners lower the surface tension of water so it stays in contact longer and absorbs more heat. They do not have corrosion inhibitors or any of the properties of antifreeze, and some of them suggest running 100 percent water to make it work better. Good for a race car that gets flushed after each race, not your show car/driver. I will say it again: A properly designed and maintained cooling system only requires antifreeze and distilled water to perform perfectly. Regular flushing would have avoided the mess I found.