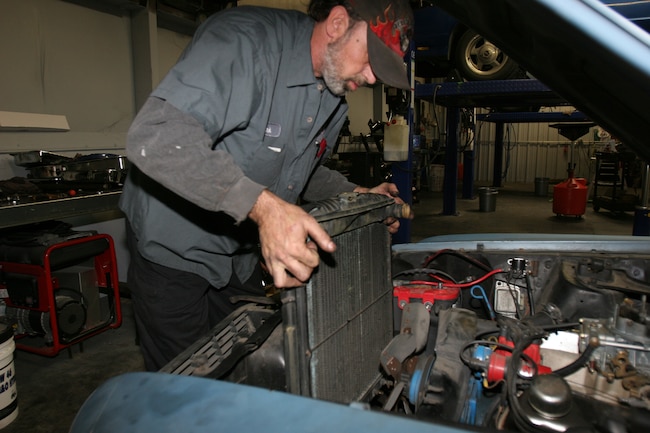 Keeping it Cool
I have a 1967 Mustang with a 289, stock radiator, and 13lb cap. My car does not overheat when I’m driving around town, but after about 10 minutes of continuous driving my car starts to slowly get hotter and hotter until it eventually overheats. This is on the highway and on normal city streets and I have already replaced the lower radiator hose to make sure it’s not collapsing. What is happening?
Chaz T.
Via the Internet

We have a 1966 Mustang with inline-six. I replaced the radiator with a 3-core and electric fan, along with new hoses with lower spring and new thermostat. I even removed the head and had it pressure tested. She still runs hot up hill and above 60 mph on flat roads—upwards to 230 and above. Water seems to be flowing well and engine oil contains no water. Three mechanics and no one can figure it out.
Charlie Maclaren
Via the Internet

As you know, the cooling system is pretty simple. Coolant circulates through the engine to draw heat off of the metal components to the radiator to transfer that heat to the outside air, and then back to the engine to grab more heat. As long as everything is in good condition, generally you don’t have problems. Three things to remember when running down overheating problems are: obstruction, flow, and load.

Obstruction is the biggest and probably the main problem in any system. Remember, it worked fine when everything was new. Once things start clogging up flow is reduced and the efficiency goes down. When parts go bad, we tend to fix the bad part but don’t fix the whole system. When the entire system is not cleaned out, the old grunge is simply allocated to the new components. And you can’t just run some radiator flush through the system, you really have get the block completely cleaned out. Crud settles down in the water jackets below the core plugs and will prevent proper flow. Most of the contaminants in your new radiator probably came from here.

Most engines are on an overhaul or two by now, and you need to make sure that the water passages are thoroughly cleaned out before reassembly. After the machining process is complete make sure they really did a good job cleaning out the jackets. When a block is machined you are taking away metal to transfer heat, so the engine will run hotter after a rebuild. Not a big problem on a properly built engine; big problem on a dirty rebuild.

Flow is your water pump and whether or not it is working well. Most people put a new pump on a rebuilt engine so it is not usually the problem. Obstruction obviously has a direct impact on flow. The cars listed above more than likely have the narrow radiator, which, even in 3- or 4-core status is too narrow. If a car is heating up under highway speeds or under load, the pump may not be up to the task.

Load is what creates the heat. The more work your car does (load), the more heat it will produce. Overheating under load conditions may mean that an external problem is present: transmission misalignment, pulleys or other items pulling down the engine, or air conditioning systems putting excess load on the engine. Also remember the automatic transmission cooler is located in the bottom of the radiator. A transmission issue may also cause problems in the cooling system. An engine rebuilt improperly will also overheat if the tolerances are not correct.

So here is what I recommend you do or look for if your car is overheating at driving speeds or slowly after driving for a few minutes—and you have done all the “normal” checks (thermostat change, water pump, etc.):

1. Really look over the fins of the radiator for any bent-over fins. This really disrupts and impedes the smaller radiators from working well. You may want to pull it out and check both sides.

2. If you have your radiator out, fill it with water and cap off the lower hose exit. Release the lower hose stopper (your hand if you wish) and watch the flow. It should drain very rapidly, especially if it is a 3- or 4-core radiator. If it isn’t flowing at a good rate, have it cleaned out at a radiator shop. Turn it upside down with the radiator cap on and do the same procedure through the upper hose. A clogged radiator will pass a pressure test, but not a flow test.

3. With the radiator out of the car, pull the thermostat housing and reverse-flush the system with a hose. Tap water is OK for flush. I have done this on several cars with new components, and it is really amazing what comes out. Flush until it runs clear.

4. Always use distilled water in your radiator. It is cheap, and although your garden hose water is fine for flushing, it’s the minerals in tap water that cause the damage to the coolant system.

6. The engine fan becomes useless at around 30-35 mph, so it isn’t a problem here. If you have problems at idle or at low speeds, consider an upgrade to an electric fan. A car that idles at 700 rpm is not pulling enough air with a four-blade fan to keep the engine cool. An electric fan running a constant 1,800 rpm is much better for stop-and-go driving.

7. The whole “spring in the lower hose” advice is a Band-Aid for a bigger problem. If the hose itself is good but it is collapsing, it’s a sign that there is a clog and the pump is having to work harder.

8. Look over the front-end components like the power steering, A/C, and alternator, and make sure they are aligned and working properly. Make sure they are not adding excess load on the engine. This is extremely rare but check it anyway.

9. It is also possible that if the engine was rebuilt, the engine itself wasn’t built properly and is too tight on tolerances, causing additional load. This will generally end with an engine failure very quickly.