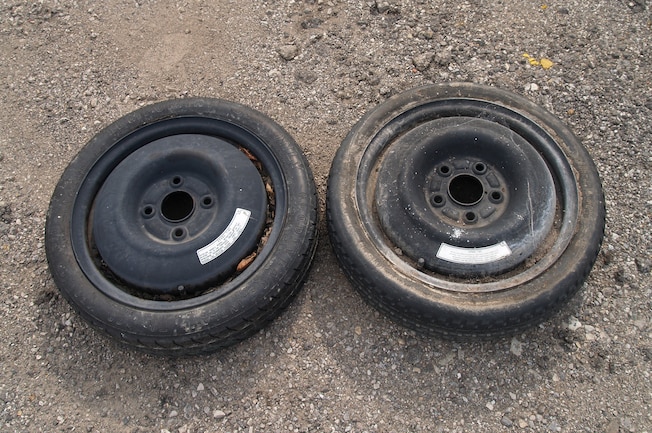 I'm looking for affordable options for my missing spare tire for my Mustang. Magazines frequently cover wheel and tire fitment for our classics, but the spare is never mentioned. Asking about a classic spare at a tire shop elicits a blank stare with a twinge of fear from the counter guys. None of my local Mustang friends have spares either, and the Internet is full of listings for original $1,000 space-savers for thoroughbred cars. Could you identify the correct specs for a spare for those of us who just want function? Trunk space is important to me, and I’m considering using a modern space-saver spare. The bolt pattern appears correct, but I know there’s more to it than lug pattern. Will any of these new spares from Ford work?

It depends on if you need a five-lug or four-lug bolt pattern. Five lug is easy. The Mustang since 1994 has the 5x4.5 bolt pattern with a center bore of 2.77 inches. The original 1965-1966 center bore is only 2.44 inches, but for a spare, you will be fine. The Mustang wheels are lug-centric, regardless. A lot of Ford cars used that pattern, and the Mustang spare will be smaller, so look for one from a wrecked Mustang. A four-lug spare is a little harder, but not impossible. A lot of imports used the 4x4.5 pattern. The Fox body Mustangs used a 4x4.25, so they won’t work. The 1965 four-lug came with the same 2.44-inch center as the V-8. Late ’90s Hondas and Acuras had a very close 2.52-inch center bore, so I would search the yard for one of those. Mazdas have a smaller 2.35 center, so those won’t work. A lot of imports used a much bigger 2.6- to 2.7-inch center, but they will still work. You may have some clearance issues if you have aftermarket disc brakes. Some disc setups require a wheel to clear the bigger caliper. If so, you may want to look into Crown Vic or newer model Mustangs. Be sure to try it when you get home. Take your measuring tape with you to measure before you buy the spare, and you shouldn’t have a problem finding one.

If you don't care about originality and want to save some room in the trunk, late-model space-saver spares can ease up some room. I found these two late-model 15-inch space-savers during a quick walk through the neighbor’s tow lot. Both are 4 1/2-inch bolt pattern and a 2.52-inch center hole and are built to clear a disc-brake caliper. Overall diameter is about 22 inches; a typical classic Mustang tire is 25 inches across. Just be careful with old space-savers. They dry rot just like regular tires. If you find a space-saver wheel that fits, but it needs new rubber, check out the folks at Maxxis Tire (www.maxxis.com). They are one of the largest manufacturers of space-saver tires, and you can get fresh rubber through them or one of their dealers.

I blew a fuse in my 1968 Mustang and found they had put the wrong size fuse in the slot. I can’t find the really small one it needs, so can you give me part numbers? That way, I can order a package of each and have spares?

Larry B.
Via the internet I sure do. The fuses are off sizes that are not normally carried anymore in auto part stores. So owners tend to use what they can find. Eaton Bussman still makes them, and you can order them from electronic stores or through many Mustang part vendors like NPD. Here are the Bussman numbers for your 1968. Note the dome light takes a smaller fuse but is still an SFE-style fuse. SFE-14: 14 Amp for Accessories and Heater
AGA-2: 2.5 Amp Instrument panel
SFE-7 1/2: 7.5 Amp Dome Light
SFE-20: 20 Amp Cigarette Lighter

The 1968 fuse block used four SFE style and one AGA style fuse, and they were frequently replaced with improper size fuses (yes, I have pulled bolts out, too.) Even though the dome light fuse is shorter, it is still considered an SFE-style fuse. The small one is the instrument panel fuse, which is an AGA style.