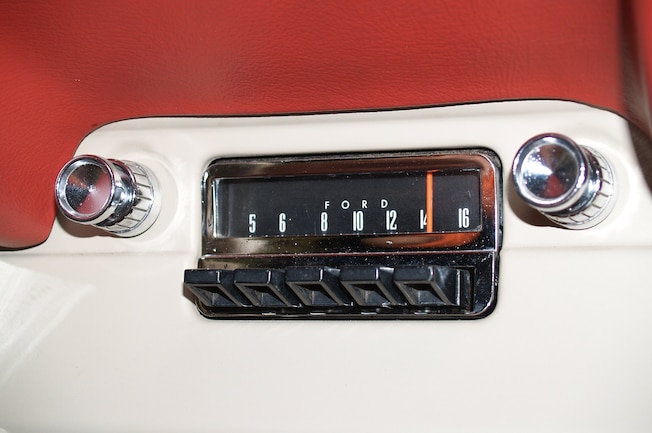 Could I get your opinion on headers? I have a 1969 428 CJ R-code Mach 1. I recently had the engine rebuilt and added Edelbrock Performer RPM heads. It’s a four-speed with power steering and no A/C. The engine is still out of the car. What would be your choice for the fewest installation headaches?

Frank Montana
Via the internet

With Edelbrock RPM 428 heads in a 1969 Mustang chassis the clearance on #1 cylinder is tight, as the Edelbrock heads are taller than stock. Use the horizontal bolt pattern if your headers allow, otherwise you won’t be able to use a stock header bolt.

I had the same problem with the G.T. 500 we used on the last leg of the 2017 Hot Rod Power Tour. It is also a 428 CJ with the Edelbrock Performer RPM heads in a 1969 engine bay. The headers I chose were the Ford Powertrain Application Tri-Ys. The flanges are laser cut and slotted for both GT and CJ configurations. You can get them bare or ceramic coated.

The big issue is the clearance on cylinder #1. The RPM head is taller than the stock head, and the flange for the #1 exhaust cylinder is very close to the wraparound shock tower. It’s so close that a regular hex-head exhaust bolt won’t clear. Some of the clearance issues also have to do with the wraparound itself. I have seen the wrap very tight to the shock tower, and some with more than a 1/8-inch gap. The headers have the dual pattern, but the rake on the #1 primary is severe enough that the rear horizontal bolt won’t go in. We ended up having to use the vertical pattern. To get this pattern to work, we used a high-grade button-head cap screw, and I think we shaved it a little! If your wraparound shock tower reinforcement sticks out too much, you might need to get it red hot and give it an “influence” to sit against the shock tower tightly.

The fitment with the RPM heads is going to be there regardless of the type of headers you buy. The Tri-Y should have plenty of clearance for your Z-bar and clutch linkage, but FPA says it might need some influence, as well. Other than that, they fit like a champ. If you do decide to look at another set of headers, keep in mind the clearance issue on #1 and find a header that allows you to use the preferred horizontal pattern on #1.

My question is about my radio in my 1965 fastback. The AM radio works, but now for the past few years, I only get one station: 710 AM. This station is religious only. My deceased dad was a preacher, and he would try to sway me back in the day until we agreed to not talk about that topic. My friends all know about this and think he’s still working on me through my Mustang’s radio. Ha! I realize the AM stations are all talk nowadays and no music, but I just can’t figure out why I only pick up one station. I’ve changed the antenna and adjusted the tuner screw, but it made no difference. Can you give me a clue? I know there are new radios that almost look the same as the older ones, but I am hoping the old-look radio will work.

I can’t help you with the subliminal messages from your AM radio, but perhaps I can help on the radio itself. The biggest thing that happens with the older radios is the capacitors start to leak out, and they lose their effectiveness. It sounds like that is what is happening with your radio. There are several places that can fix your AM radio, and I have used Ward’s Classic Car Radio Repair with very good results. If you are looking for more music, they also offer an FM conversion for your radio, and nobody will know you did the conversion. But if it only picks up Gospel stations after that then you’re on your own!