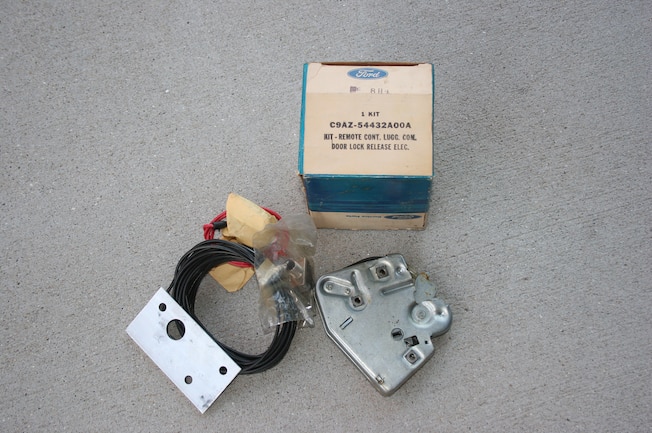 Did Ford make a remote trunk release for the 1969-1970 Mustang like they did for the 1965-1968 Mustang? I always thought it was a neat accessory. I have never seen one for the later models.

Ford did make a remote trunk release accessory for the 1969-1970 Mustang. The 1969-1970 style was electric with a push button that could be mounted under the dash or glovebox. The Ford part number is C9AZ-54432A00-A. I have included a picture for reference.

I have a 1970 Mach 1 with a four-speed transmission. I’m looking for the correct lockout rod for this application. I sure could use a picture of the rod and the part number to help me identify the correct one. Is it the same as other applications?

The correct engineering number on the lockout rod is D0ZA-7E330-S. The rod has a clear Cadmium finish. The rod also has a green paint daub on it. This rod is also used on 1970 Boss 302 and 1970 428 CJ four-speed applications. A reproduction of this part is currently available.

I’m looking for an original 1971 Boss 351 owner’s manual supplement. I had the original that came with the car, but recently lost it at a car show. I had it on display in the trunk at a local show and it disappeared.

I would call Rick Radtke at (414) 762-6711 in Oak Creek, Wisconsin. Rick is a Ford literature collector, and I’m sure he will have a mint Boss 351 manual for your car. It's always a good idea to display color copies of original paperwork at car shows for numerous reasons. At least a Boss supplement can be replaced.