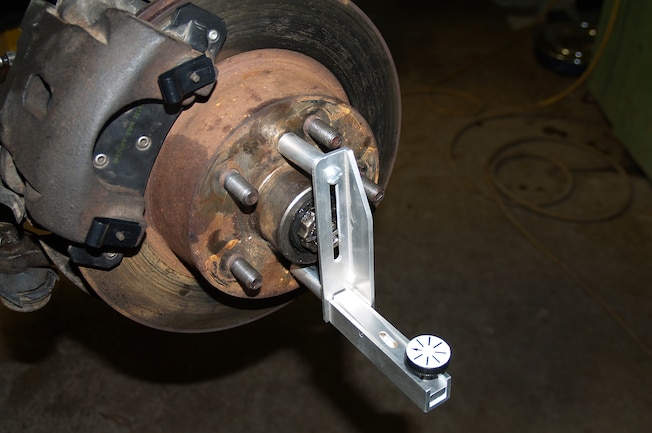 In the January 2016 “Beyond the Basics” column on page 82 in the letter titled “Bumpsteer Bugs,” there is a photo of an alignment tool being used. I would appreciate it if you could share some info about that tool, such as the maker and where to purchase it.

Neil Oliver
Via the Internet

This is a hub-style caster/camber alignment tool I picked up from Speedway Motors (www.speedwaymotors.com, PN 91082610). It is an inexpensive way to set the caster and camber on your car. I use it to get the setting close before I take the car to have it aligned. It works great.

To check the camber, you need the car level, the suspension at the static ride height, and the wheels pointing straight ahead. (I’m cheating in the photo and using my lift to get the shot.) The gauge has a couple magnetic mounts that attach to the hub, and you usually have to pull the dust cap. There is a small bubble level in the gauge and a dial with eight segments representing one-eighth degree each. Once the wheel is pointing straight, zero up the gauge, and mount it vertically to the hub (you can use another bubble gauge to check the vertical). Rotate the dial until the bubble centers and count the segments on the dial. Clockwise is positive camber; counterclockwise is negative camber. If you went four segments counterclockwise, you are at a one-half a degree negative camber.

The caster measurement is determined by checking how much rotation you have between 20 degrees turned in (about one revolution of the steering wheel in most cars) and 20 degrees out. After leveling and zeroing the gauge 20 degrees in, move the wheels back to straight, and move them out 20 degrees. Set the gauge back to vertical and see how many revolutions it takes to center the bubble, then you multiply this by 1.5 to get your caster setting. For instance, if it took 1 1/2 revolutions clockwise, it would be 1.5 x 1.5 = 2.25 degrees of positive caster. There are fancier tools that do the same thing, but this inexpensive little tool is a great addition to your toolbox.

Can I run a ’69 Mustang fuel sender in my ’70 Mustang? The part’s place says these parts are different, but I believe they are the same. I have a ’69 sender just sitting around that I could use in my ’70 Mustang, if they are indeed the same.