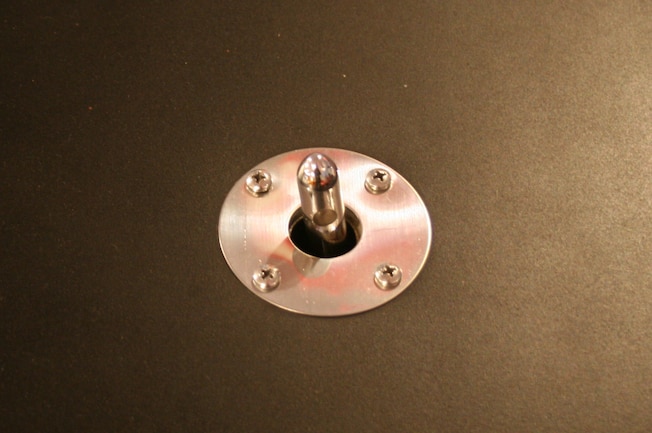 I need to install the plates on the hood for the hoodpins on my 1969 351W Mach 1 Mustang. Are the screws that attach the plates to the hood indexed in any particular order? Would you provide us with a reference photo? Thanks!

Jim Basile
Via the web

I checked three original paint cars here at the shop. All three are indexed the same. I have included a picture of the unrestored 1969 Indian Fire Mach 1 I have in our showroom for your reference of the hoodpin scuff plates and the orientation of their attaching screws.

I picked up an interesting piece of Ford promotional literature at a local swap meet recently. I assume it was some type of mailer to potential buyers. I have not seen one before, so I thought I would share with your readers. I would be interested to know any other info on this cool Cobra Jet promo item.

You have a very rare piece of Ford literature. Your mailer was targeted to current GM and Chrysler owners of performance vehicles at the time. The recipient opened the 6x11-inch snakeskin mailer and the Cobra snake head “pops” out. Very cool! According to the press release, 432,000 mailers were sent in February 1969.

I was informed by a MCA Gold card judge that the 1971 Boss 351 carburetor had idle limiter caps on the carb. I would like to purchase these if available. A picture would also be helpful so I would know what to look for. Thanks for your help.

Original idle limiter caps (Ford PN C7AZ-9J500-B) are a rare find. Most service replacements were blue rather than clear. Recently Larry Hoffman has reproduced the limiter caps in the correct color. The C7AZ-9J500-B limiter caps were used on multiple applications. A nice detail for concours cars! You can reach Hoffman at lthlmh@embarqmail.com.